Attacks by All Other Religions Combined: 0

Ramadan - A time of honing one's relationship with Allah.  And one's knife.
Posted by ProudHillbilly at 6:13 PM 4 comments:

Note to self - Don't leave TP on roll in the bathroom the kittens can access. 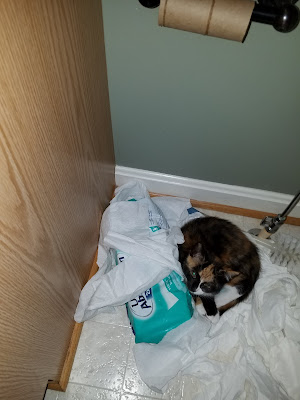 Posted by ProudHillbilly at 4:06 PM 4 comments:

So I'm sitting on the back deck in the dark just watching the lightning bugs and I clearly hear my neighbor call my name. Except she's at work miles from here.  I texted her and she called me to confirm that.

So I go down to the laundry room today.  And there's water all over the floor.  My hot water heater has expired.  Just as I had to replace an expensive window sash, some electronics in the SUV have gone flooey (and it's not fuses - pulled a bunch of them today), the kittens are becoming hidiously expensive, and I'm still struggling with the tax debt that the retirement folks caused me when they stopped deducting for state taxes in February and I didn't catch the change in deductions.

I may just curl into a fetal position in the corner and cry.
Posted by ProudHillbilly at 6:46 PM 9 comments:

So, it is currently popular to ignore little details such as x and y chromosomes, penises and vaginas in favor of what a person "identifies" as.

Well, OK then.  If all that matters is what one identifies as then I identify as an armed American.  I do NOT identify as a person banned from owning a gun because of a secret government list that involves no due process and requires that a person prove they are innocent rather than assuming citizens are innocent until proven guilty.

And if you say different you'll hurt my feelings and you know how important feelings are.  I might need a safe space.
Posted by ProudHillbilly at 6:21 PM 6 comments: 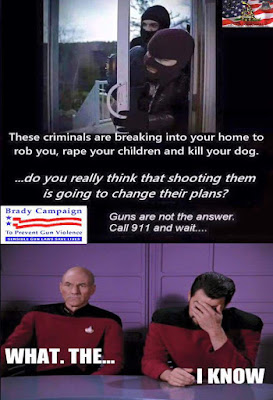 Posted by ProudHillbilly at 9:05 PM 5 comments:

But I can't stay awake for the final count.

Posted by ProudHillbilly at 8:57 PM No comments:

Text From My Daughter

"Amelia's class transitioned up today. Her new class is "Gideon's army." That seems pretty intense for people that pick their noses and can't wipe their butts."
Posted by ProudHillbilly at 9:51 AM 6 comments: 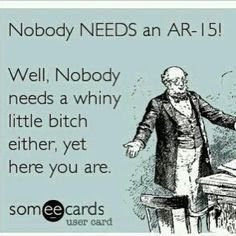 The debbil made me do it...
Posted by ProudHillbilly at 5:30 PM 7 comments:

It's that they are DANGEROUSLY dumb as posts.

I give the current b.s. concerning the Orlando massacre as a prime example.  Chicago, Baltimore, Aurora, San Bernadino, Paris, Utoya - all excellent examples of the success of gun control.  Ban ARs!  Even though Mateen didn't use one!  So then we can work on determining the make and caliber of pressure cookers in Boston, the make and caliber of jets in NYC?  And let's talk about the dear old United Kingdom.  Disarming their citizens has brought so much peace that the UK managed to become the most violent country in Europe.

But never let anything get in the way of FEELINGS! And never bother to enforce the laws already on the books.  Just make more laws to not enforce.  Because criminals will take one look at that law and say "Well, guess I can't have one of those."

How about we just make murder illegal?  That covers all bases and will stop it all without needing to go into detail of HOW a person is murdered.  Oh, wait.

And this whole blame-it-on-anybody-but-Muslims thing.  Dumb as posts.  Every bit of information available to me concerning things like the history of Islam and things like the Crusades is also available to anyone not too lazy to get up off their parroting butts and really study.  But apparently Orlando happened because I do not believe that Christian churches or businesses should be forced by law to participate in something that doesn't actually exist, so-called "gay marriage."  I don't believe they should be forced by law to allow men into restrooms, changing rooms, or locker rooms with women and little girls.  THAT appears to be what caused Orlando.  That despite the fact that what we are seeing now is normal and to be expected from Islam.  IT'S WHAT IT'S ALWAYS BEEN! It's what has happened since the 7th century when cultures have weakened and been in turmoil - Islam exploits that and begins another cycle of invasions.  Just like it did when it first crushed the Christian lands of the Middle East, of Egypt, of North Africa - the lands now known as Islamic were Christian before Islamic invaders exploded into them. 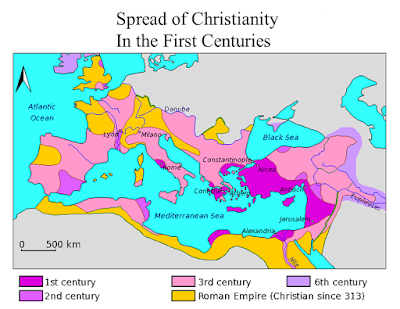 Who truly speaks for a religion?  The founder.  A Christian's actions can be compared to the founder of Christianity, Jesus, to see how they compare.  If you compare Omar Mateen's actions in Orlando to the founder of Islam, Muhammad, Mateen died a faithful Muslim.  Milo Yiannopoulis is exactly right when he says "This is not radical Islam.  This is Islam."

Day 10 of Ramadan 2016:  79 attacks, 684 dead.  May 2016:   231 attacks, 1883 dead, and 2206 injured in 31 different countries.  And on and on and on.  Month after month, year after year.  "It's far easier to act as if critics of Islam have a problem with Muslims as people than it is to accept the uncomfortable truth that Islam is different."  Because of that, all the blood spilled as leaders like Charles Martel and Jan Sobiesky beat back repeated Islamic invasions of Europe will have been in vain, because Europe has been given over to the invader by feckless fools.  Orlando and San Bernadino and Boston and Chattanooga will happen again.  And again and again. Because WE are being given over to invaders by feckless fools.

Once I was told by a liberal that I had to respect everybody's opinion.  Why? Hitler had an opinion. Shall I respect it just because somebody had it?  An opinion has to be worthy of respect.  A whole lot of people have opinions that just prove that they are dumb as posts.  Worse, DANGEROUSLY dumb as posts.

Yes, I slept fine on the sofa.  New bed arrived the next day and is quite comfy.

For a while now I've been aware that someone has been throwing rocks at my house. It seemed to start with using my laundry on the line for target practice.  And I started finding rocks on the side of the back deck that sticks out.  And on the front porch.  I commented to a neighbor that it is probably kids thinking it's funny, but it wouldn't be funny if they broke a window.

So sometime Friday before last they broke a front window. Which happens to be the kind that you can't take apart to replace the glass.  New sash plus labor - $250 plus tax. Still don't know who did it.

Then this Friday was check-up and vacination day for Perry and Mama. Five minutes after we left the house Mama explosively pooped.  I so hoped I wouldn't get pulled over for speeding because I was flying down the road, all windows open, AC on full.

And after we were done, we headed back with cleaned carrier and new towel.  Which she then annointed.  And Perry decided he'd get in the act, too.

So once again I'm flying down the road, all windows open and the AC blasting.   And about 15 minutes before we got home Mama informed me that she was car sick by projectile vomiting through the front of her carrier and into the SUV.

Yesterday was spent with stuff like cleaning cat vomit out of the SUV.  I'd noticed that one of the kittens had been sneezing and was a bit snuffly.  When I came in at about 9:30 yesterday evening I realized that he was much worse so I stuffed him into a carrier and headed for the emergency vet office about 40 min away.  Pneumonia - he got to stay in the hospital for the night.  OK, the cost hurts but I'm not just going to let him die.  I head home.  As soon as I walk in the door I hear the same snuffling sound the first kitten was making.  You are kidding me... I shove that one in a carrier and start inspecting the kittens one by one.  I found one with a runny eye, stuffed her in, too, and headed back to Winchester.  These two are just at upper respiratory infection level, not pneumonia. But one has some signs that lead the vet to give her antibiotics.  And everybody in the house has to have antivirals.  The vet tells me it's highly contagious and that it may be a rough couple weeks.

So back home I go with those two.  An isolation room has to be set up to keep the most actively ill ones seperate from the others.  And one by one each kitten has to be chased down and medicated, followed by the adults, who weren't happy about it either.   We get to do that twice a day for the next couple weeks.

Then I finally got the sheets on my bed and got a shower and collapsed as the sun was coming up this morning.

They are only still alive because they are so cute...

I'm sorry, but where did I sign up for Bedlam?
Posted by ProudHillbilly at 6:31 PM 10 comments: