And I'm not going anywhere near a store. 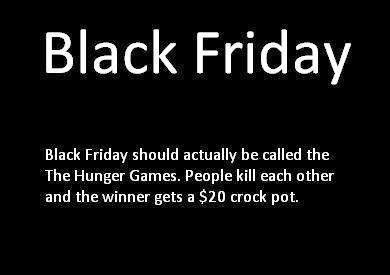 Posted by ProudHillbilly at 4:00 AM 3 comments: 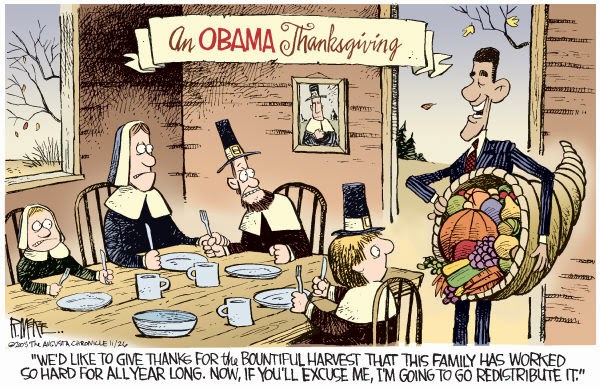 Posted by ProudHillbilly at 4:00 AM 5 comments: 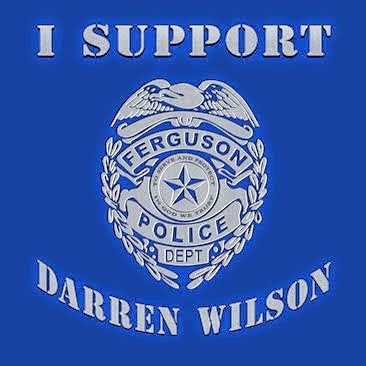 I wish Officer Wilson and his new wife the best, and hope that they can build the life that the media and the race-baiters have tried to destroy.
Posted by ProudHillbilly at 6:25 AM 7 comments: 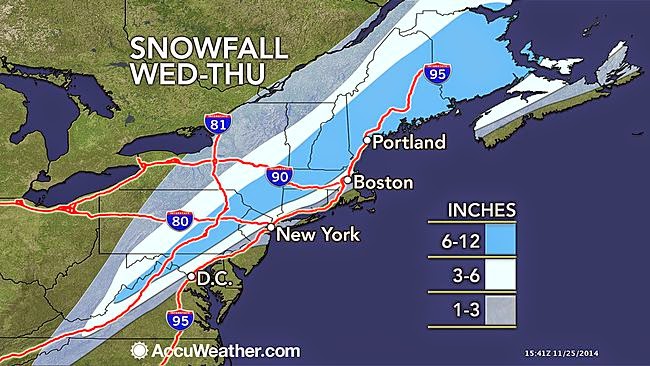 Dear nor'easter - I've got chips, dip, cheese, crackers, kerosene for the space heater, and various types of adult beverages.  Bring it!
Posted by ProudHillbilly at 9:08 AM 4 comments:

Email ThisBlogThis!Share to TwitterShare to FacebookShare to Pinterest
Labels: nor'easter, we are smack in the area of heaviest snowfall

...when the verdict in the OJ Simpson trial came down.  I thought it was such a miscarriage of justice that I went out and burned and looted throughout the night. Oh, wait.  I went back to work, feeling that there was a miscarriage of justice but that it was what it was and the jury had way more evidence before them than I did.
Posted by ProudHillbilly at 8:06 PM 4 comments:

No Snow Here Yet 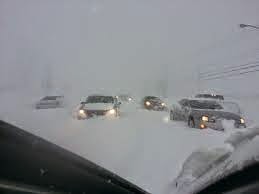 But as I drove home from work late last night in the BRRRRRRRR, it occurs to me that it's time to move the cold weather emergency stuff into the SUV, just in case.
Posted by ProudHillbilly at 9:33 AM 5 comments:

So While We're Waiting for the Ferguson Decision...

...there are some people who need a firm response to their demands for "rules of engagement":


They want a 48-hour notice in advance of the grand jury decision for riot prep (presumably to stockpile rocks, bricks, bottles, etc).

They want to be able to use social media and cell phones to shift and focus riots (a lesson they learned from the “Arab Spring”) with impunity and without communications interference.

Perhaps most disturbing, they want [the] police to have minimal defensive protection against rioters, and assurances that the police won’t use the tools that may be needed to break-up riots once they turn violent.

And of course, they want virtual “get out of jail free cards” for both the leaders of their movement and the rioters themselves.

How about "You riot again and we will kick your a$$es clean into another state." From both the police and every decent citizen in any place this starts fermenting.

How the blank can people whose ancestors suffered lynchings in the not so distant past be so ready to do the same thing themselves? 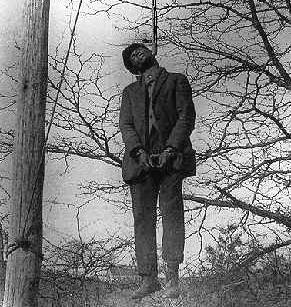 ... idiot kitten got himself stuck behind the pharmacy cabinet. 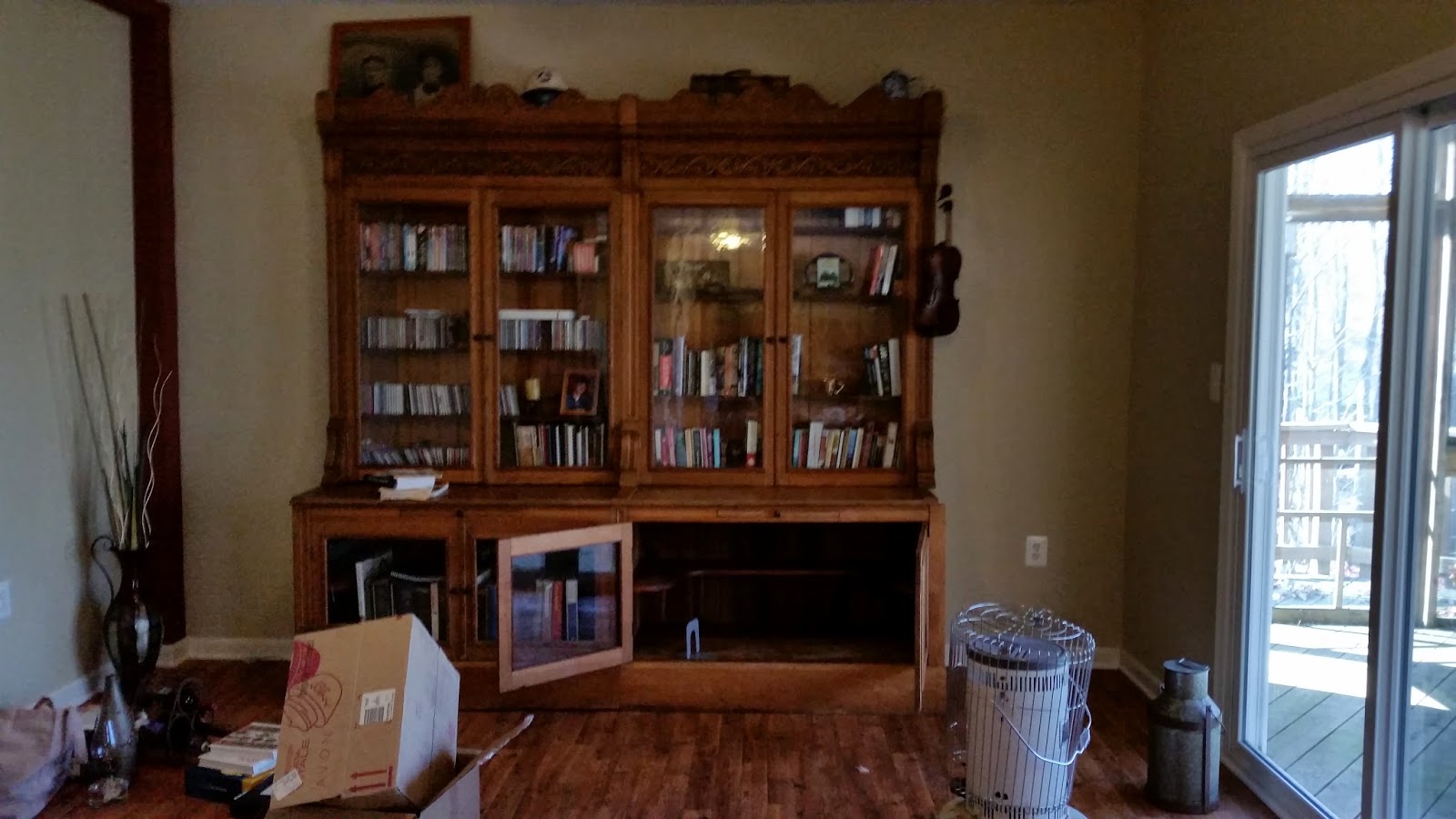 The several hundred pounds when empty, solid oak one.  That is anchored to wall studs and full of a couple hundred more pounds of stuff.

I was just about to phone for help when he finally wiggled free.  Good thing he's cute.


Posted by ProudHillbilly at 9:40 AM 6 comments:

A year ago I had an unpleasant encounter with a negligent neighbor over his lack of care for his animals.  Over time, the companion cat to the one who caused the encounter moved to my porch, where, provided with food and shelter, he has grown into big, affectionate boy.  The little grey and white kitten that I saw in the background while I was standing at the neighbor's door also got put out, and, after a period of time of being terrified of everything, also moved to my porch.  Very affectionate and playful, he became delightful company when I was outside.

With 4 cats inside now, I couldn't bring any more in, but a friend asked to take them both - Lil D and Tommy were obviously best friends and we didn't want to separate them.  So, after keeping them isolated in a spare bedroom for a few days to get them used to being inside again, I took both Lil D and Tommy off to be neutered and inoculated today.  Also for blood tests, although they both seemed so healthy I didn't think there'd be a problem.

But it turns out that Tommy had feline AIDS.  He could never be around other cats again without risk of infecting them.  I had to tell them to put him to sleep.  My heart is broken. 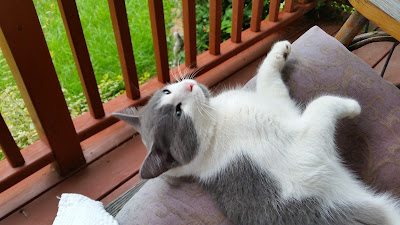 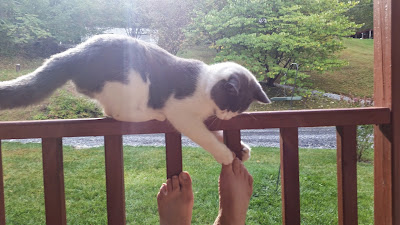 Posted by ProudHillbilly at 8:45 AM 9 comments:

Email ThisBlogThis!Share to TwitterShare to FacebookShare to Pinterest
Labels: heartbroken

With Apologies To Verizon

CAN YOU HEAR ME NOW?!


And the best news from last night was not just that Greg Abbot handily won the governor's race in Texas over one of the most vile opponents he could have possibly had, Wendy Davis, but that Davis' seat went to a Tea Partier, Konni Burton.  Abortion Barbi, you are just too ugly inside for Texas.

Now we have to apply a vice to the sensitive regions of every one of those professional RINOs on Capital Hill and make it clear that Americans want a real and true change, not more of the same miserable big government just painted a different color.
Posted by ProudHillbilly at 6:16 AM 11 comments:

Email ThisBlogThis!Share to TwitterShare to FacebookShare to Pinterest
Labels: a rebuke to Obama, election, we need real change

That it was election day.  I was laying in bed this morning and thinking I didn't have anyplace I had to go today.  Yeesh.  Maybe my brain got so tired of the ads that it blocked it out.

I know I'm slow.  Others have already posted about how great the Saturday blogshoot was.  It really was.  Those of you who were not here should have been.  But note for the future, and I'm sorry we didn't think to warn ahead of time - there are really only a couple hotels in town that I'd stay in.  We have a casino and track.  There's a lot of rental by the hour in some of those nearby hotels.  At least that's what I suspect - that's what they look like and I've heard rumors.  And there's the one where there was a murder.  Ick.

I was too busy watching to take pictures but I did get this one - pin shoot with flintlock.  It was great to be able to finally shoot a flintlock but unfortunately my arms are way to short - I'd have to have the stock cut down to use one.  It's interesting - black powder doesn't kick so much as push. 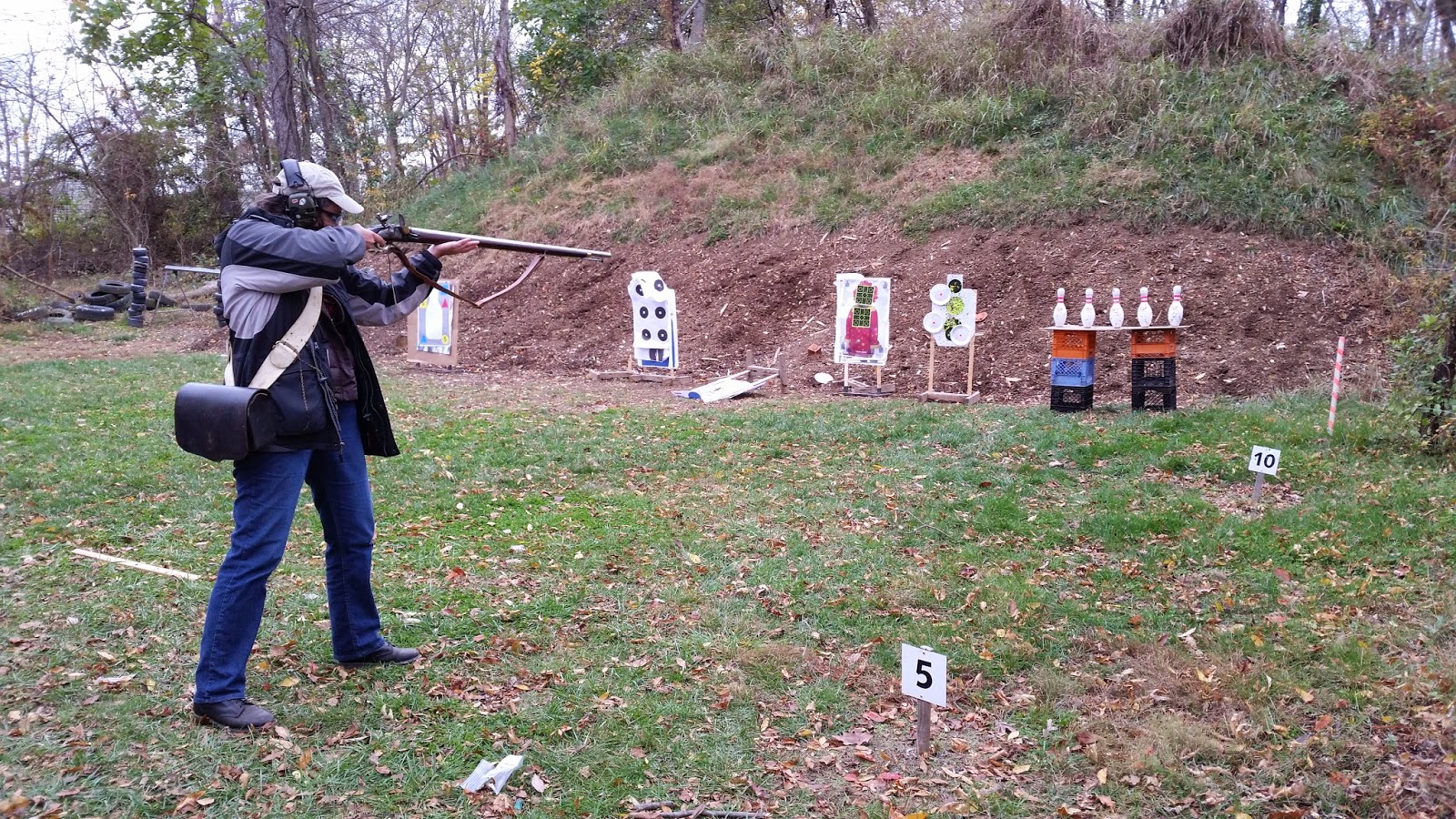 Along with her flintlock, Nancy brought a gift for The Crazy Cat Lady. 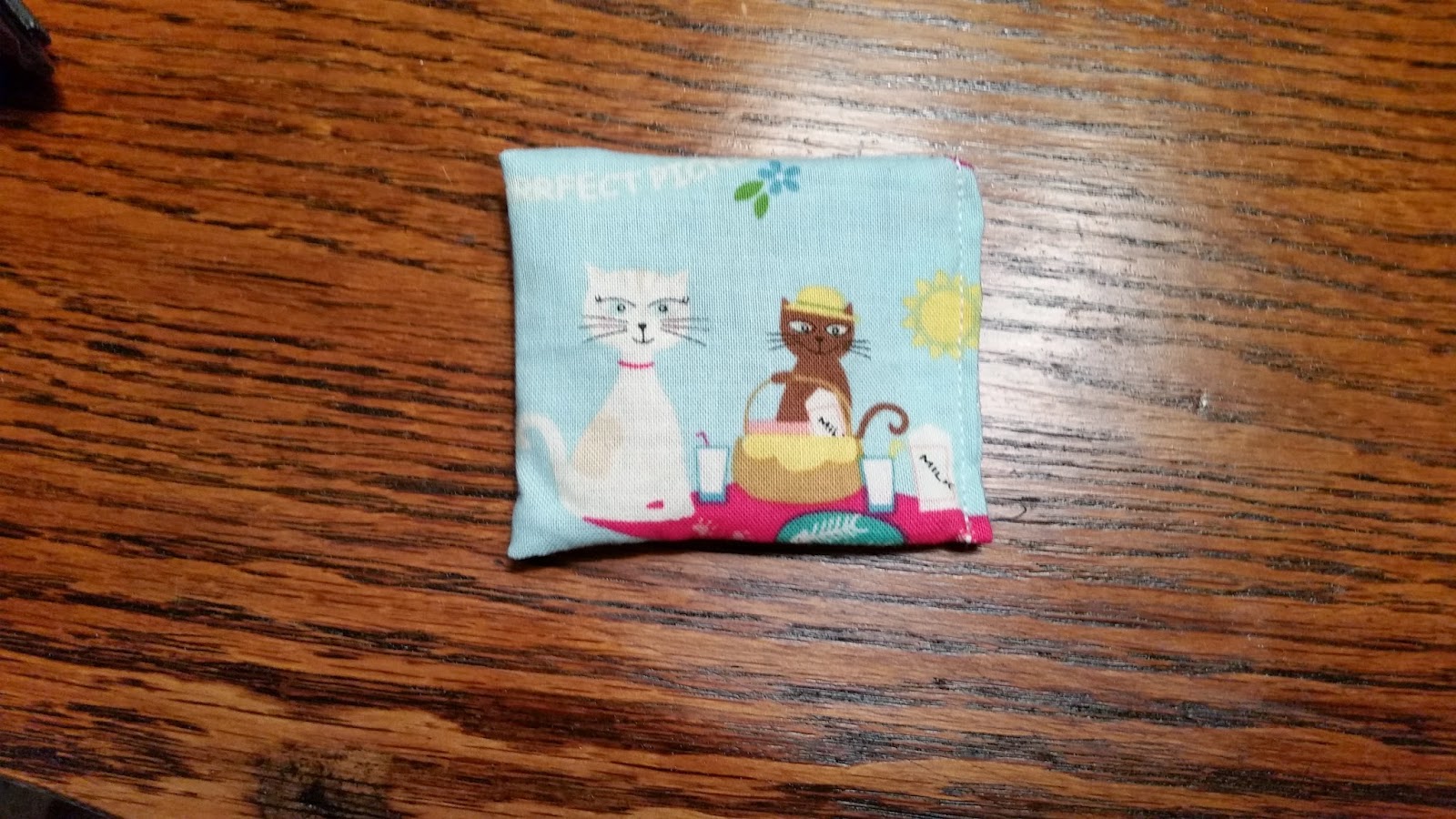 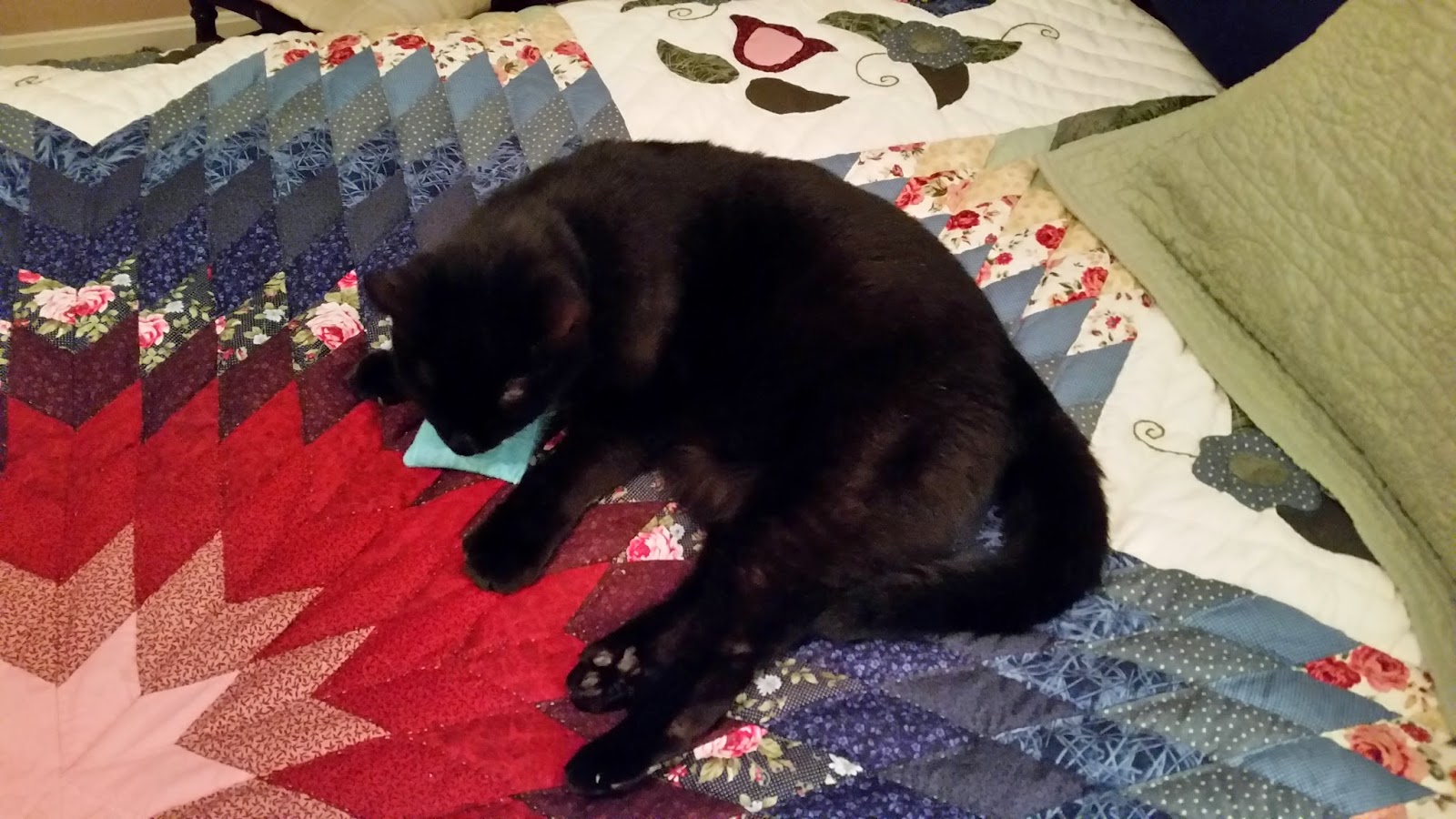 Then comes the rolling around and waving paws in air in a most undignified manner.  Blackberry is such a dignified old lady.  Until catnip gets involved. 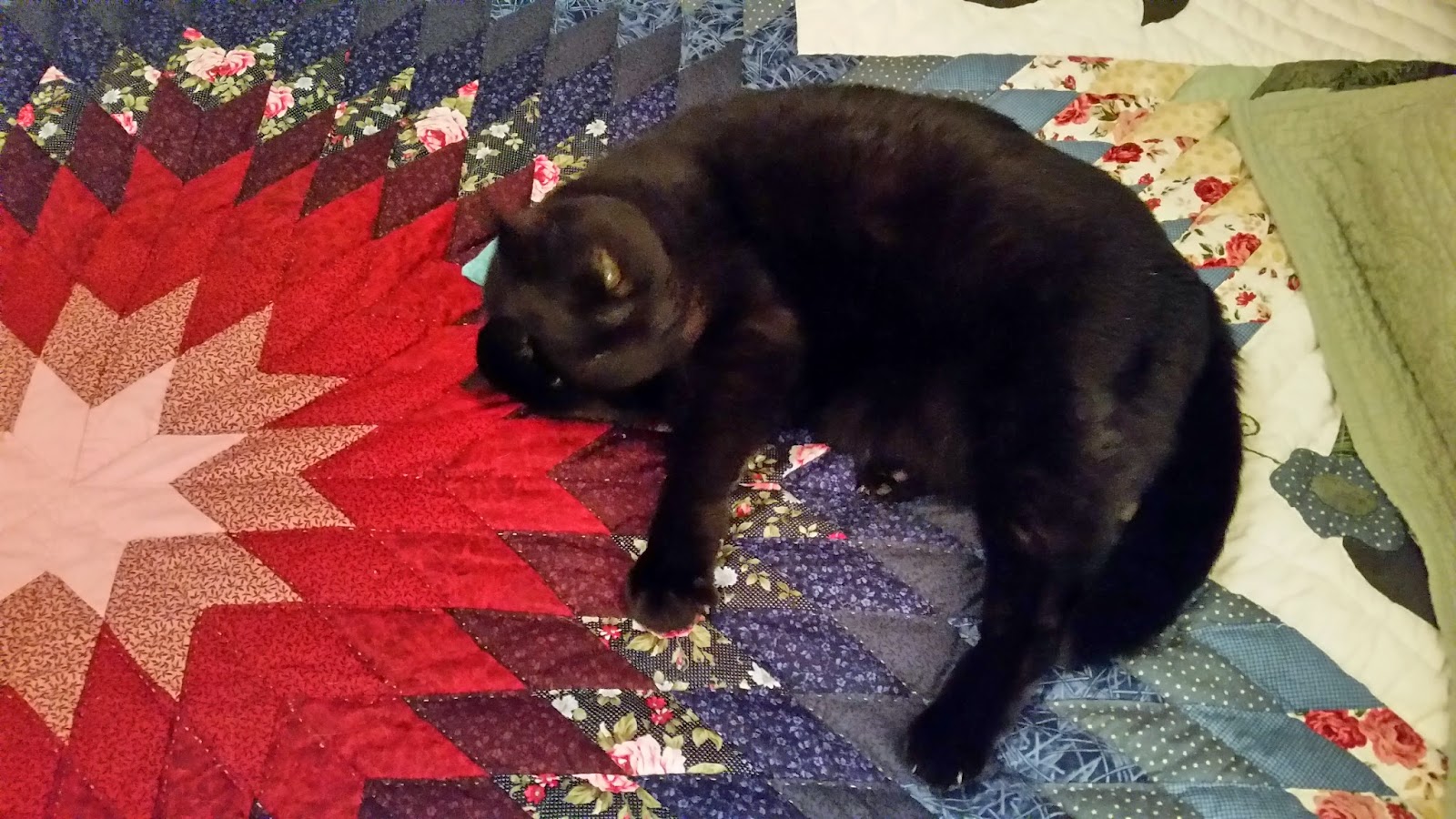 Sunday was spent cleaning out old dresser, getting it out of room, and getting the new, much older dresser into place.  I had lots of help.  What's another 9 lbs of cat while moving an already really heavy dresser? 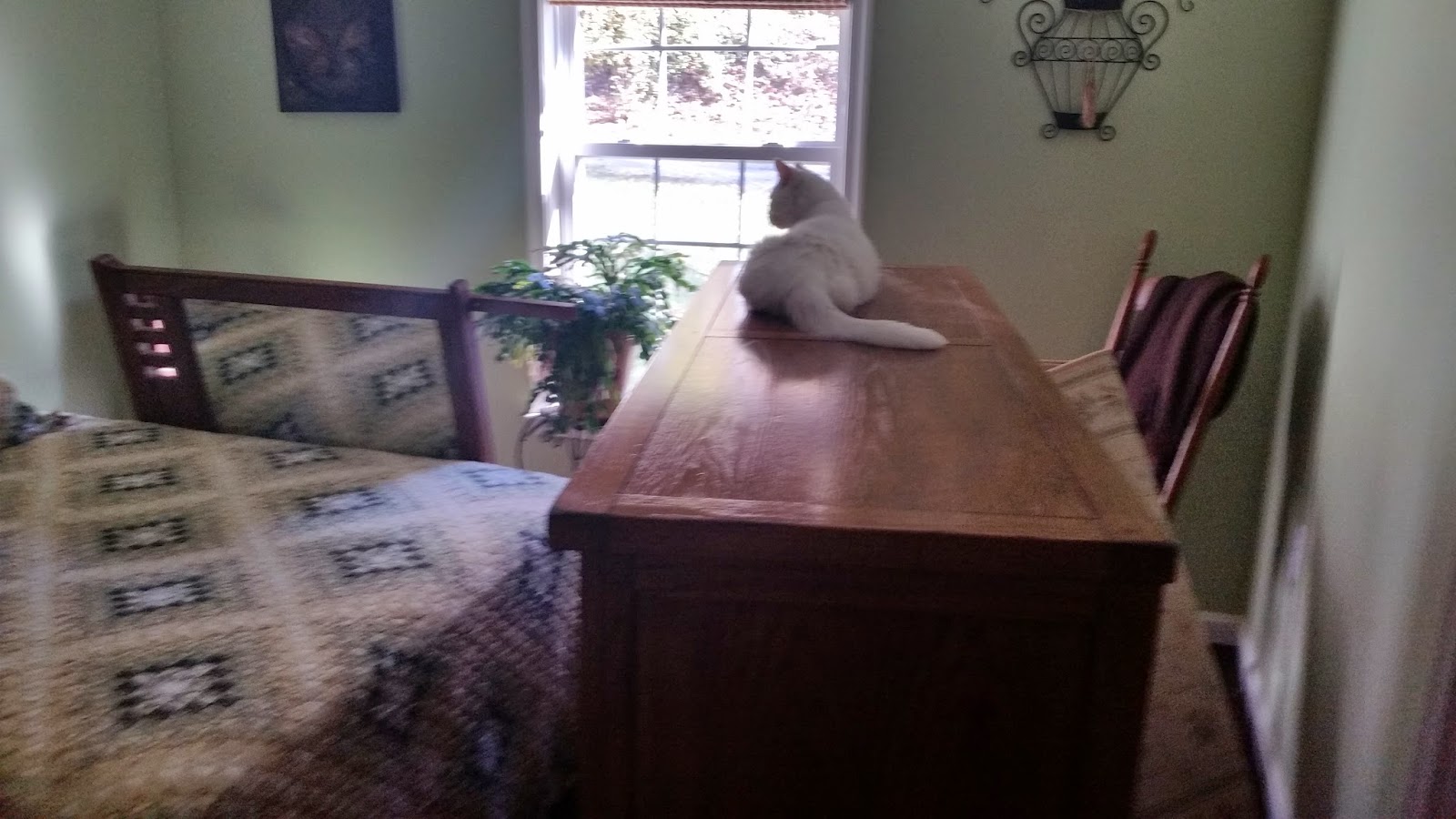 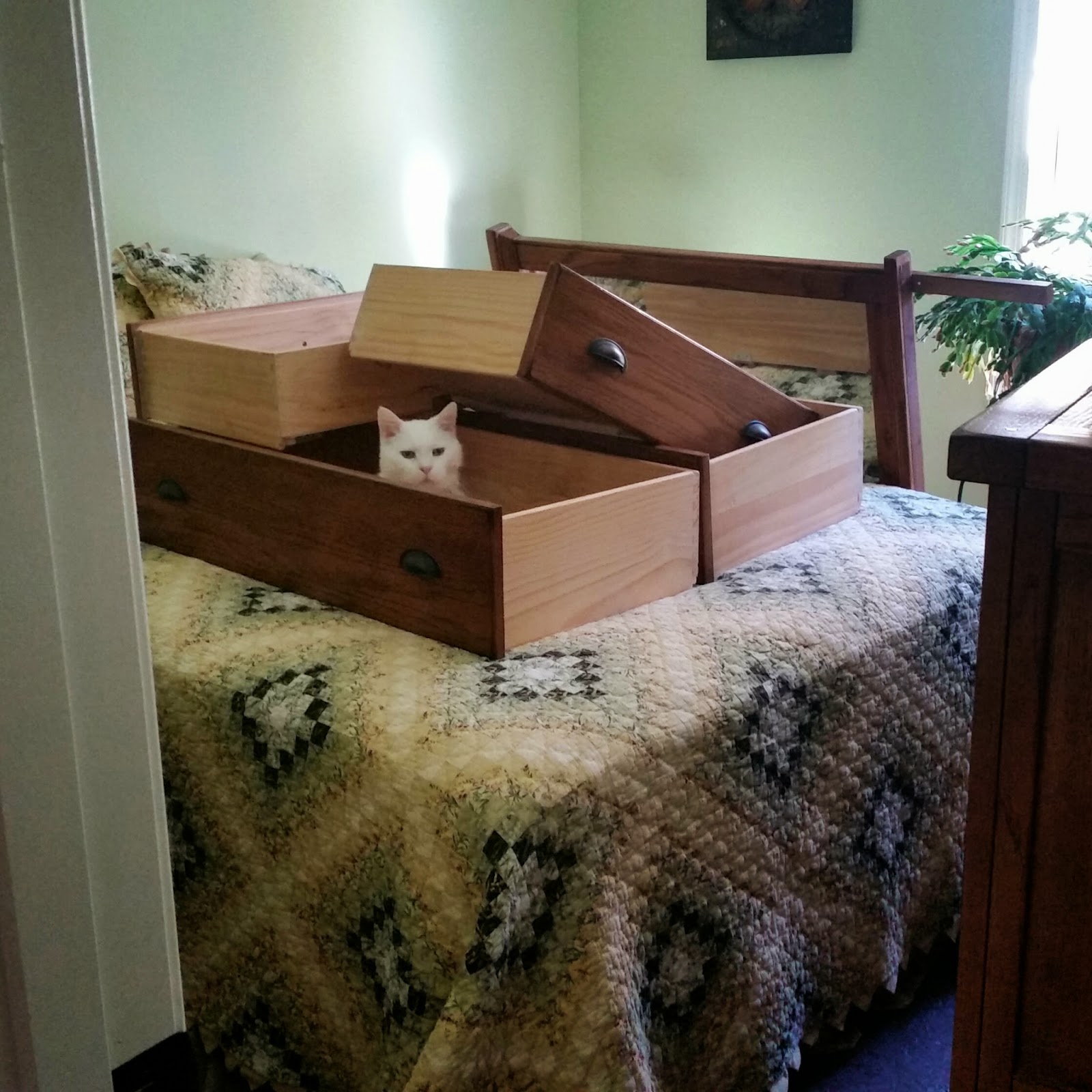 The new old stuff is factory made, around 100 years old, and oak.  Nothing special as antiques go - they've had repairs and are worn, but it was love at first sight despite the warts.   And they have half the space in them as the previous junk accumulators.  It really made me realize how much more stuff we own now than 100 years ago.  And a good deal of what I pulled out either went into the trash or to Good Will.  I found myself wondering why I had so many pairs of socks, why I had 8 pairs of jeans when I only wear a couple pairs between laundry days, and why I never threw that raggedy stuff away. 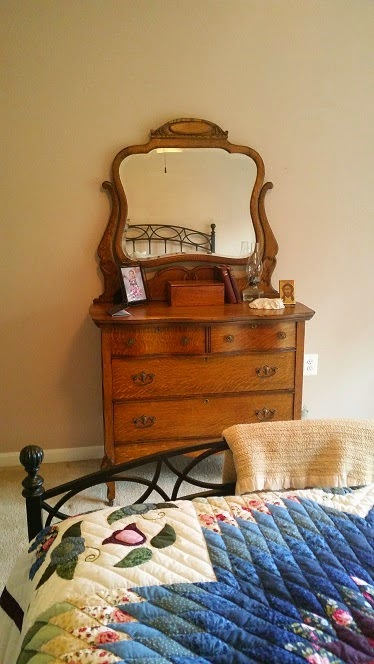 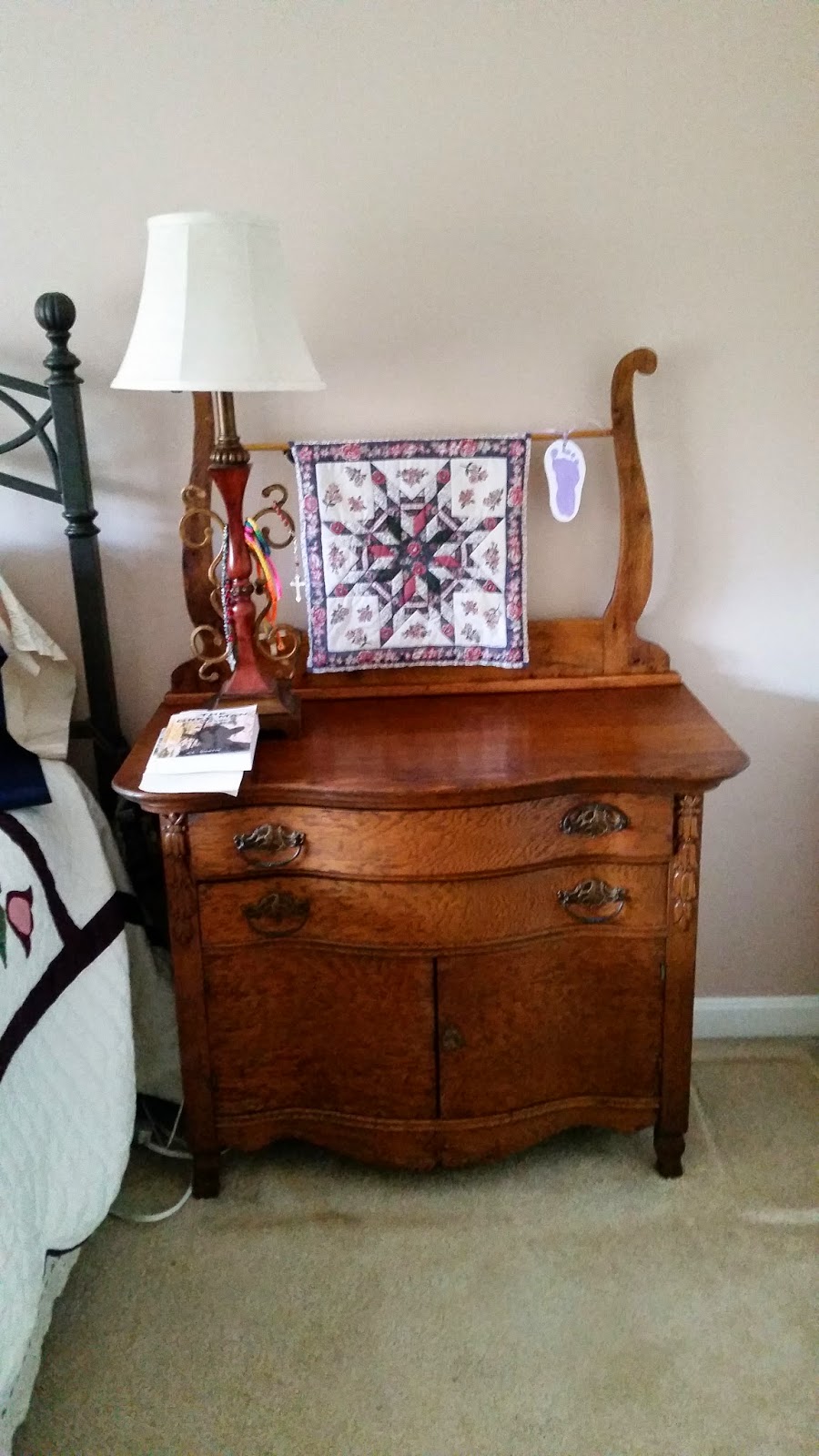 Gotta get some art on the walls, though.  And I'll be glad to replace that carpet next year.  It is so done.

And the final project of the weekend - start bringing the 2 outdoor cats slated for neutering soon in at night to see how they adapt to indoor life.  They have to be kept isolated from the other cats, but I have a spare bedroom to use.  All went well.  There reaction was "Hey! Dinner!" and "Pet me now!" and they made themselves right at home.  They've both been trying to get in my door for a while - they obviously are indoor cats that have been put out.  Because the room is small they'll just come in at night until surgery.  And once their blood tests come back clean, they'll move to another house where they will be spoiled and have plenty of room to roam. 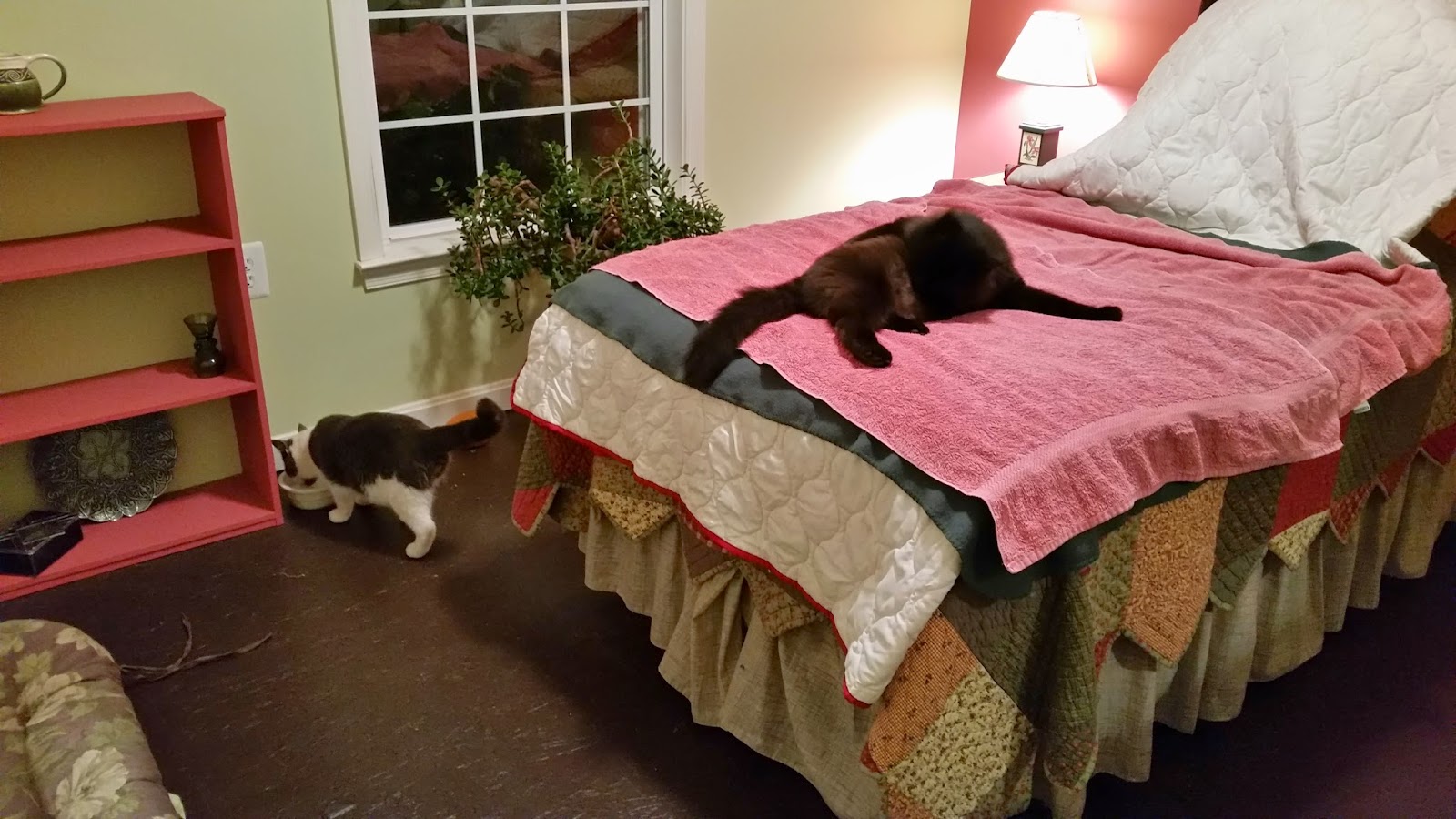 They other cats saw me take them in and there was much curiousness. 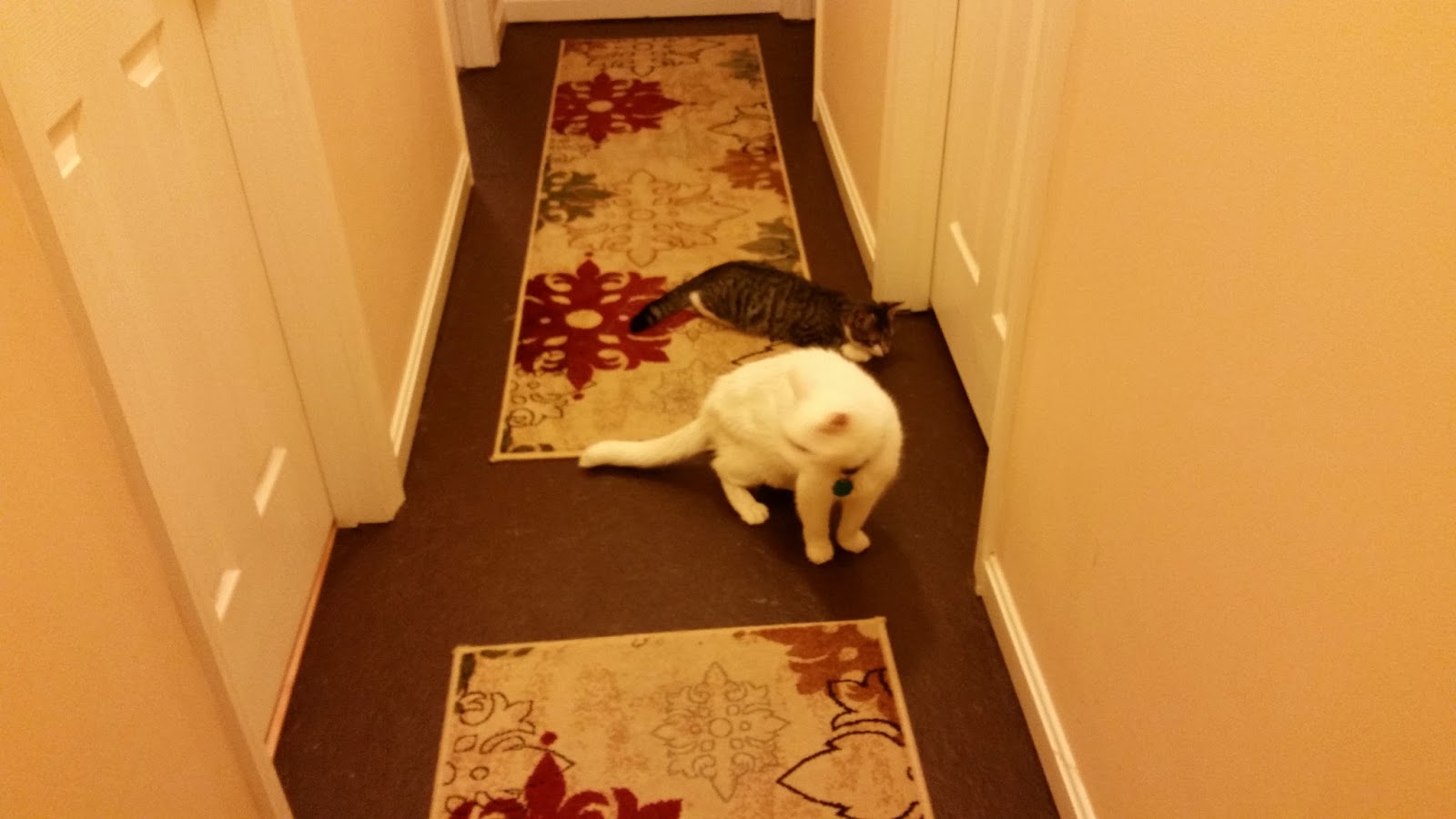 Soon off to vote.  I'm so glad we still have paper ballots in this state.  I'm hearing call after call into a MD radio station from people who watched their Republican vote be switched to Democrat as they tried to vote. Never Democrat to Republican.  Wonder why that is?

Posted by ProudHillbilly at 8:10 AM 8 comments: