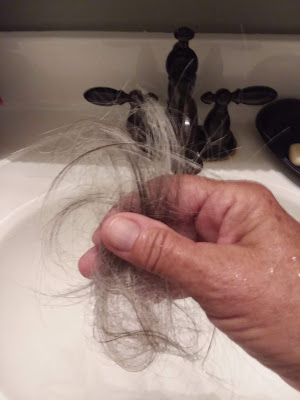 By Tuesday evening I had bald spots and was tired of the constant rain of hair. So... 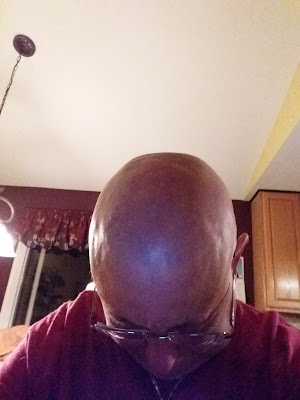 Posted by ProudHillbilly at 8:10 PM 7 comments:

If You Have Some Spare Change...

Yeah, I know, but every little bit helps.

The 26 year old son of an acquaintance and grandson of a friend from church was in a catastrophic head-on collision a couple days ago.  He is in critical condition with a multitude of broken bones and a de-gloved upper arm but when they don't have him in a medically induced coma he's alert and able to make jokes.

The remains of his car are on the truck and under the guardrails: 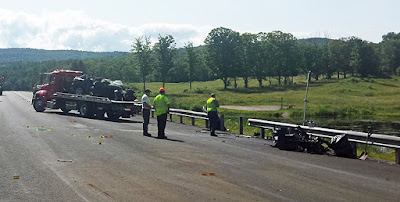 Kaz has a Go Fund Me, and anything you can throw that way would be deeply appreciated.   He and his family have a very long and difficult road ahead of them.
Posted by ProudHillbilly at 12:39 PM 3 comments:

STOP Before You Even Start

No, this isn't about chemo.  Although feeling lousy from it has allowed me lots of time read.

I'm embarking on reading the 800-plus page grand jury report released by the PA Attorney General concerning priestly sex abuse in Pennsylvania, which has dropped like a bomb in the media.  Along with the news about Cardinal McCarrick, who, I think, was my archbishop at one point but I can't remember.  Bishops come, bishops go.  Most of those who were pope/cardinal/bishop when I converted are in the realm of very gone and have answered for any sins to another Judge.  But I figure that if I'm going to miserable I might as well add long documents read on a computer to the misery.  And try to offer it as penance.

I always notice that when stories like these hit the news many of the finger-pointers and superior-than-you-revilers are the same ones who dance to the gay pride, must-bake-a-cake, anybody-can-use-the-bathroom-they-identify-with tune.  "Pedophiles pedophiles!" they chant.  And yet the most in-depth study done to date after the Boston scandal, the John Jay Report, clearly found that 81% of the known incidents of alleged sexual abuse were male on male.  Psst - that's called homosexuality.  51% of the victims were between the ages of 12 and 15.  Another psst - that kind of homosexual is called a "chicken hawk" in gay slang.  You can look it up over at the gay wiki - I'm not posting that link.  But people work hard to ignore that because, like so many other things, it doesn't fit their narrative.  And they probably got all upset about the Vatican declaring that no known homosexual should be accepted into seminary because oh the poor gay guys are just trying to serve.  Well, a bunch apparently HAVE gotten to serve, so put up or shut up.

I noticed with interest from a summary of the John Jay Report that "The number of alleged abuses increased in the 1960s, peaked in the 1970s, declined in the 1980s, and by the 1990s had returned to the levels of the 1950s." Gee, I wondered what happened during the 1960s?

Note I use the words "alleged sexual abuse." The #MeToo blow up worried me - all it takes is allegations and your life is destroyed.  Sure Hollywood is sexually corrupt, but everything has gone to a "guilty until proven innocent" footing.  Accusations can be an effective weapon of destruction. Remember Salem?  Funny how the accused tended to be people who had crossed the accusers or their families at some point.  I guarantee you that there are plenty of people out there, including those who call themselves Christian, who will make false accusations just because you pissed them off.

A criticism of the report I'm going to slog through is that it's all accusations with no supporting documentation.  Perhaps that will come next with prosecution.   Accusations are not the same as truth.  If there is evidence of crime then any priest or bishop involved should be defrocked immediately and any civil action against them should be pursued.  It's not a time to whine about the poor gay guys, either.  Any known homosexual in Holy Orders at any level should be defrocked.  Unfortunately, sex crimes tend to have a statute of limitations.  And I don't know if the Vatican still actually has any authority over a priest once they are defrocked.  The fact that they've been defrocked doesn't mean they can't move around and celebrate the Mass anyway - they actually have the equivalent of BOLOs that go out sometimes because a former priest is doing this and trying to gather a congregation.

And, by the way, a Philadelphia judge (you know, that city in the state where that great big mostly homosexual abuse scandal happened) has ruled that religion-based adoption agencies cannot refuse to adopt to homosexual couples.

Now I get to the STOP Before You Even Start.  Like I said, I'm getting lots of reading done, including comments at news sites.  One of the common comments basically is "If priests could get married it wouldn't happen."  Just STOP right there.  That is so shallow that people who otherwise recognize that we have a societal problem should be slapped hard across the face the instant they say it just for a stupid penalty.  (If you don't recognize that we have a cultural problem then you are dumb as a post and a part of the abuse problem.)  At the very core of our culture is "I want what I want" and "Sex is god."  And one thing that the news does not report, including the so called conservative sites, is that Protestant churches are in the midst of their own sexual abuse scandals.  That takes about one minute of searching on "protestant sex abuse."  You hit sites like http://stopbaptistpredators.org/index.htm and http://reformation.com/ and articles like "The Silence of the Lambs."   But I have no patience for shallowness so deep that it thinks a guy being able to bang his honey anytime he wants is a solution to this illness.  My family has WAY too much experience with married abusers to have any illusions about marriage and predators.

There isn't a bit of this that should be unexpected. The "sexual revolution" declared that sex is a pleasure game, nothing more, that everybody had a right to that pleasure, and that the rules were old-fashioned, Victorian, and should be disposed of. Well, If YOU aren't bound by rules you don't like, if there are no eternal absolutes beyond what YOU choose, NOBODY ELSE is bound by rules THEY don't like! If I say it's immoral to shack up with your honey or have sex before marriage, you tell me to sod off - I'm old fashioned, I don't have the right to force my morals on you, I'm way behind the times. Well, guess what? Pederasts that like sex with altar boys or young seminarians have told YOU to sod off. THEIR rejection of rules say it's OK, just the same YOUR rejection of rules says its OK to do what YOU do.  You don't get to cry about abused alter boys.  You helped it happen.

Posted by ProudHillbilly at 6:22 PM 2 comments:

And cheaper.  They slapped this little thing on my arm after Monday's infusion: 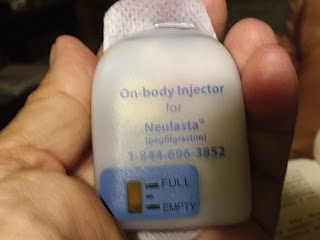 And about 24 hours after that goes in, just as you are finally getting your stomach under control (INDIGESTION!!!! REFLUX!!!) and the feeling of being on a bad drunk is easing, your bones and muscles decide to hurt like you've been in a bad car accident.

I've gone from taking minimal medications and nothing otc to having a pill box full of stuff to deal with the fact that I'm being carefully poisoned.

Posted by ProudHillbilly at 5:46 AM 3 comments:

Email ThisBlogThis!Share to TwitterShare to FacebookShare to Pinterest
Labels: Chemo

...you have the New York Times backing their new hire, South Korean-born Sarah Jeong, even though she has a solid anti-white track record that includes saying how much she enjoys being cruel to old white men.

On the other hand, white men who never got old because they died in a war that ensured that Miss Sarah wouldn't be born in a country ruled by a communist dictatorship are finally coming home. 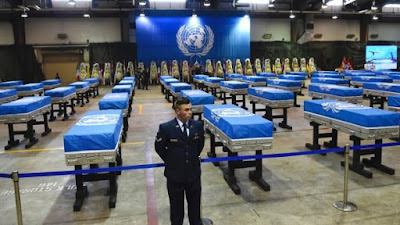