Let Me Be Perfectly Clear

If a man walks into a restroom I am in and doesn't look embarressed, excuse himself, and back out because he's made a mistake, I will "escort" him out.  If there are little girls in the bathroom, it will get very unpleasant. If my granddaughter is in that bathroom it will be the absolute worst day of his life.  I absolutely promise that.
Posted by ProudHillbilly at 4:41 PM 5 comments:

I finally realized that, after nearly 40 years of taking care of someone or some critter, I'm ... playing.  Not that there weren't moments and days over those years but... I'm playing.  As I explore woods and river day after day, walk mile after mile, breathe deep, get stronger and stronger despite artheritis and blisters and other physical issues, I'm ... playing... Huh.
Posted by ProudHillbilly at 4:18 PM 4 comments:

Well. That was unpleasant.

Facebook gets hacked and "friend" requests go out from folks you've already friended.  Today I got a friend request from Charlie.  Who died in a fire just before Christmas.  Not funny.  Not funny at all.
Posted by ProudHillbilly at 5:51 PM 1 comment: 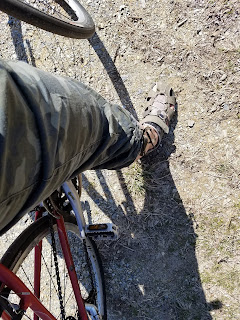 And it looks like it's staying with us until March.

First bike ride in months.  First time in years that I have had regular physical activity every day.  And first lesson - biking muscles and walking muscles are actually fairly different even though they both involve legs.  And while the towpath seems level, unused biking muscles can detect the slope as you climb northwest.  Also, I should have changed into my padded biking shorts instead of plain short pants after Mass.  'Cause OW my butt!  How can my butt be so big but be so unprotected at the same time?

But a beautiful ride.  I want to come back on foot and explore the remains of a road that, according to my guide book, goes past various ruins, including a canal community, on the other side of the canal.  I've got some serious neck problems that may require me to trade for a recumbant cycle, but its worth the suffering on a day like today.  10 miles, then I went off to explore stuff on foot as well.  This area is the north end of where the canal barges locked in/out of Big Slackwater above Dam 4.  The cliffs here were too much to allow for a 60 ft wide, 10 ft deep canal to be built so they built the dam and created a 14 mile resevoir in the river. 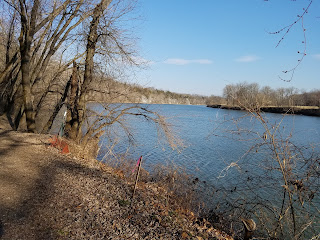 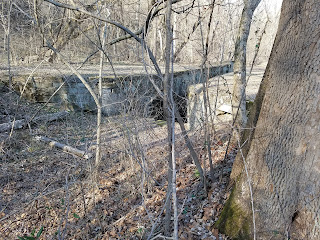 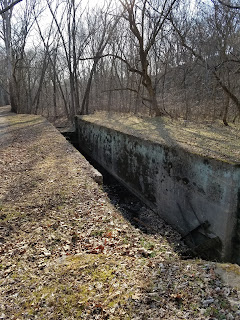 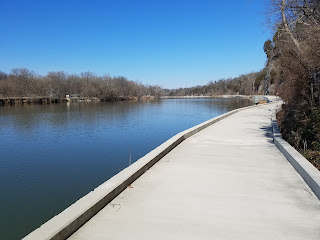 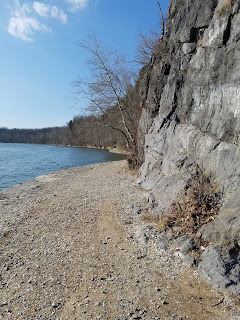 Posted by ProudHillbilly at 4:30 PM 3 comments: 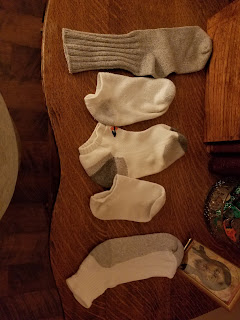 All the laundry is done.  I'm going to have to pull out every doggone fitted sheet and check the corners.
Posted by ProudHillbilly at 5:31 PM 3 comments:

Quick, Dems, keep demanding Ellison repudiate Duke even after he has done so repeatedly!  Except Duke and Ellison are much closer in philosophy than Trump and Ellison are.

Posted by ProudHillbilly at 5:00 PM 2 comments:

So, You Need A Product

And you go to the store.  You find a version of that product on the shelves, but it is not as high a quality as what you want, so you plan to continue your search.  But you pay for the product you don't want before walking away and leaving it on the store shelf.  After checking out a couple other stores you find the version that you wanted and buy it and that's the one you take home and use.

So you've paid for an inferior model of what you were looking for without having any intention of using it.  Plus you've also paid for the product that you found that fits your needs.  Double dipping OUT of your pocket.

Does anyone know of someone who would do such a thing - willingly agree to pay for a product they don't want and leave it on the store shelf?  Does it make sense to do something like that?

Well, that's what opponents of tax breaks or vouchers for private schools or home schooling are demanding people do.  Children in private schools or who are home schooled do not use the product known as public school.  They don't require that a teacher be hired.  They don't use the facilities, don't use the text books.  Yet their parents are required to pay for the teacher, the facilities, the text books.  It's not the product the parents want for their children.  But they are forced to double dip out of their pockets.

Just one more example of the hatred the left has for choice.
Posted by ProudHillbilly at 2:34 PM 2 comments: 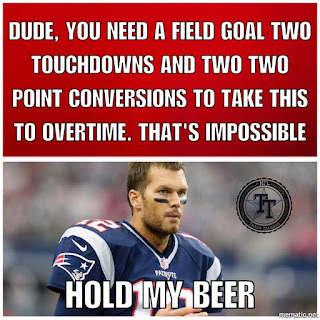 Dang.  You'd think he was a hillbilly.

It's Sort Of Weird

First there was Blu, who was the cat equivelent of an albino and had multiple problems because of that.  I started having to shove medications down his throat more than a decade ago.  And then there was the whole period when Mom fell at my house and ended up with compression fractures of her spine.  At the same time I needed major surgery.  That was the beginning of two years from hell and trying to take care if everybody at the same time - myself, my mom,  and my furrbutts.  Yeah, that was fun.

Then I lost Blu to cancer.  And less than two years later my garage produced 14 needy kittens and we went through rounds of respiratory infections, giardia, and tapeworms.  And all the while Blackberry needed more meds morning and evening.

By the time Blackberry died 3 weeks ago she was getting meds morning and night plus sub-cutaneous fluids every other day.  She had her own pill case, morning and evening pills, pills she only got twice a week, and liquid meds in the fridge

And now Blu is gone, all the kittens are gone, Blackberry is gone, and I'm down to just two seemingly healthy cats.  Nobody needs meds.  But the weird thing is that I have this strong pull to go to the kitchen and get meds every night.  If I watch Netflix I want to turn right at the top of the stairs as I come up from the family room at night.  If I read in bed I want to go to the kitchen before I turn out the lights.  I'm so used to taking care of a sick somebody that I still want to go get their meds.

I'm free of having to get somebody in, to pay somebody, to give meds to a cat twice a day for the first time in a decade.  I'd like to run away now and celebrate my freedom. I'd like to go over to the ocean and get an ocean front room.  Or go to Pittsburg and go enjoy their art museums, the national aviary, and their zoo.  But I'm so broke because of vet bills that I can't run off and celebrate.  I haven't even gotten Blackberry's last bill yet because her vet is way more interested in condolences than bills.  Which is why I still take my cats to her even though it means an hour's drive each way.

And I'm hoping Mama just has the hiccups right now...
Posted by ProudHillbilly at 7:14 PM 7 comments: 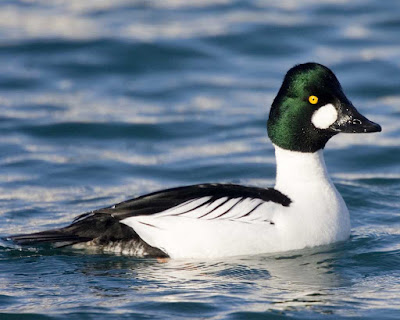 Posted by ProudHillbilly at 3:00 PM 3 comments: