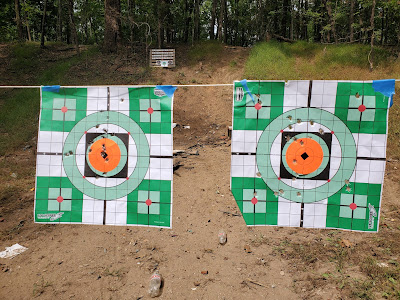 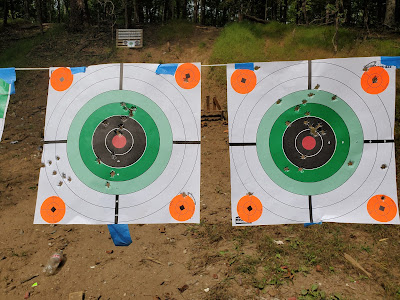 It's not a formal range - just a rough berm in the WMA that is legal to use until hunting season gets serious.  It's a half mile walk in.  Hanging the targets on a clothes line rather than having them on a stand adds a bit of a challenge when the breeze kicks up.  Don't laugh at the cluster in the lower left of the one target - I was trying for the orange dot while the breeze was blowing.  I finally taped a can to the bottom of each target to give it a little weight and steadiness.

And frabjous day, caloo, calay - just when I was seriously thinking of getting rid of the Kahr because of jamming issues I did some digging online.  Turns out that it's a long known issue with the CW's 7 round magazines.  AND instead of racking the slide to load the first round,  you are supposed to insert the magazine with the gun locked open.  Then disengage the lock and let it chamber the first round.  AND if you load a mag completely, the first round will want to tilt nose down and jam, so just load 6.  There was a whole explanation of what was going on in the guts of the gun that caused the issues, but the important thing is that I took that knowledge back to the range today and had only one jamb, and that was a flaw in the cartridge that I hadn't noticed.  Seems odd that Kahr hasn't fixed the issue and appears to have to intention of doing so.

Next time a rifle or two is going back.

Now to deal with the reload issue.  Brass I have coming out of my ears, primers are available. But bullets are as scarce as hen's teeth.  It's not going to do any good to start shooting if I'm going to get pinched on practice ammo.

Posted by ProudHillbilly at 11:32 AM 7 comments:

And oh hell no I'm not posting pics.  But I expected that.  3 years of laying off.  Still finding that post-cancer treatment doesn't mean you immediately return to normal in a hurry.  The 3 middle toes of each foot are not yet completely back.  And I understand from my reading that they may never be.

But the first bang reminded me of what I had missed.  I didn't understand golf until I started shooting.

On the way home I swung up to a new gun store to check it out and to see if they could recommended an armorer/gun smith.  I had issues with both of my 9 mms.  Turns out the guy on the counter is and he took both guns back.  I'll find out tomorrow if the Kahr behaves but the trigger problem with the Barretta is fixed.   It's beautiful.

While waiting the regulars and I were chatting and I commented about the troubles of certain cities not coming up here because too many of us are armed.  Turns out BLM/Antifa has been trying.  But there's a group monitoring them.  And when they show up they are met by a quiet but armed group that heavily outnumbers them.  And there is no crap.  Because that quiet presence tells them that no crap will be tolerated.  And this works.

Posted by ProudHillbilly at 1:23 PM 5 comments:

Trip To The Big City

Copper is a country dog, accustomed to walks in relatively quiet areas.  But the restaurant and shop area of old town Frederick, MD, blocks off the main street on weekends, creating a walking mall into which restaurants can expand their seating.  The city is very pretty and very dog friendly and Saturday was a gorgeous Fall day, so I thought it would be fun to give the pup a new experience. The place was hoppin'.

Copper was so excited by all the new he didn't know what to do. 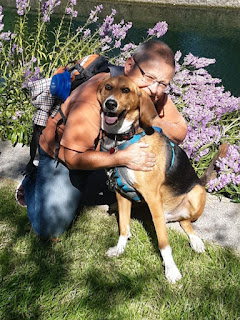 Posted by ProudHillbilly at 8:26 AM 4 comments:

Retro freezer.  Wouldn't be hidden in my laundry room like originally planned, though. 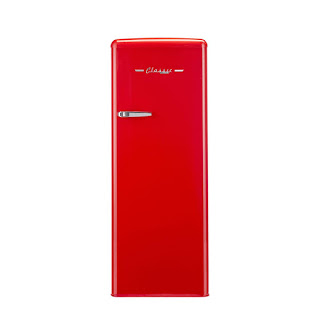 And why am I looking at freezers?  Well, um, STOCK UP!   I hope I'm wrong but I think we are in for a rough ride that will cause a domino effect even for those of us who aren't in major cities.  I thought we had until November but now I think we have about 2 weeks.   If I'm wrong, well, we're going into Winter anyway and you should be stocked for that.  And if we have no shortages due to Insanity or bad weather, well, our grocery bills will drop in the Spring as we use stuff up.

Next week's goals also involve replacing the pieces of my reloading stuff that seem to have dissappeared.

Posted by ProudHillbilly at 2:10 PM 2 comments:

Nineteen years after 9/11 a new generation of enemies is burning more than New York and the Pentagon. 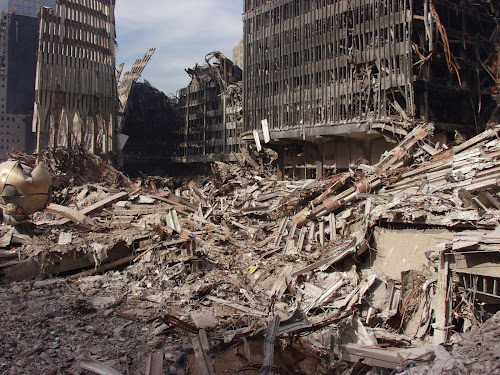 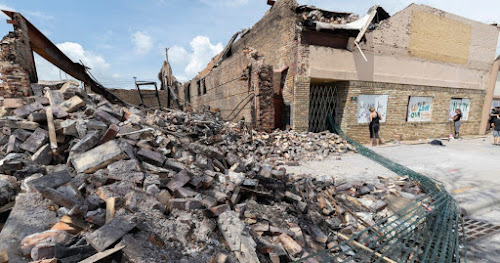 Posted by ProudHillbilly at 7:24 AM 3 comments: 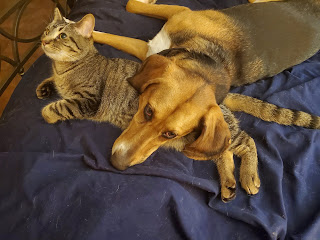 Posted by ProudHillbilly at 5:49 PM 2 comments: