I retired 11 months ago.  I never understood those who held on into their 70s because they didn't know what they'd do without their job.  I never had a problem visualizing that - work was getting in the way of my real life.

There was a serious background issue with that - by the time I retired I hated my job.  Every minute of it.  When I started 35 years before, we had been the exact opposite of a stereotypical government office, and it had been an agency that went full bore and merrily in opposition from the moment of its inception in 1807.  The mission was our driving force, and we were allowed free reign to accomplish it.  Sometimes we flew under the "don't get caught" umbrella, true, but that just drove us on.  We solved computer problems that had never been solved before.  We built whatever we couldn't buy in order to accomplish the task.  We carried equipment up mountains, worked in the middle of the night if that was what was required, cussed computers in the early days of computer processing. We were a family.  And we were proud.

And then, somewhere along the way, we started sliding into bureaucracy.  We ended up with a director who is not a leader, just a wonk.  Who then started surrounding herself with wonks in management positions.  And the focus went from the mission to crossed "t"s and dotted "i"s.  The director allowed the deputies to treat staff with appalling disrespect.  By the time I left, the focus seemd less on the mission, but on attitudes that put into place the requirement that we sign in and out on three separate forms each day - one digital and two paper.  Sounds like a small thing, I know.  But that reflected an attitude that drove decades of collective institutional memory out the door in about 3 year's time as a lot of us threw up our hands and gave up.  We were too old and too aware of the agency's amazing history to put up with its descent into stereotype.  We had worked too hard, seen too many great things done.  And we tended to be disinclined to be treated like naughty children who could only be contained by threats and verbal smacks.

Anyway.  When I left I was miserable and did not let the door hit me in the behind.  I had zero regrets about retiring.

The one tie I kept was my bank account at the credit union in the office complex.  I've been able to do everything online, so that hasn't been a problem, and it seemed like too much trouble to change everything over to a bank up here.  Except I got a check recently that was more than they allow you to deposit through their mobile banking app.  So I put together a loop of errands and headed down to the old office in the big city.

The closer I got the worse I felt.  I drove the same route, parked in the same garage.  Walked the same streets to get there.  And by the time I got there I was in a full-blown panic attack.  Sweating palms, heart racing, a sense of not getting enough oxygen.  I kept telling myself "It's not like they're going to come out and drag you back into the office."  But that didn't work.  It only took me a total of about 20 minutes between the time I left my SUV and the time I got back to it but by the time I got out of the credit union office I felt like throwing up.  It didn't start to get better until I was well on my way back towards home.

Not rational.  And a pretty clear indication of what a bad situation can do to you physically even when you aren't aware of how it's working on you.  I knew I was unhappy.  I said I hated my job and that I had to retire or I'd end up in jail for throwing some bureaucrat out of an 8th floor window. I just didn't realize how truly ferocious my feelings about it were until this week.
Posted by ProudHillbilly at 6:15 PM 6 comments:

I had hoped I would be able to pick it up in time for the (great fun) blog shoot, but stupid laws kill the immediate gratification buzz.  I bought it in Virginia but I live in West Virginia.  So it had to be shipped to someone in West Virginia who has an FFL.

An aside on this idiot law:  The shop in VA can run exactly the same check as anybody with an FFL makes in any other state.  They do so for VA residents.  As is the usual with idiot gun laws, the only person this law interferes with is someone who abides by the laws.  And it really causes one to think seriously about only buying guns person to person for cash in order to avoid the nuisance factor.  It prevents ZERO crimes. 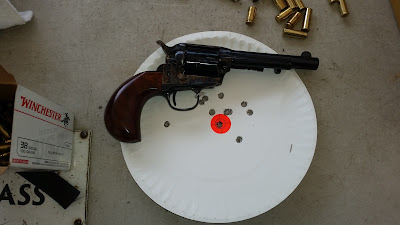 It's a repro, of course, a Uberti Stallion in .38 Special.  Also called a "pocket revolver" - um, no, my pockets ain't that big.   Some things to learn - at one point I had to read the instructions to find out how to eject the spent shells.  Going have to get used to that one by one load and eject thing as well as learning to pull the hammer waaaay back in order to go into full cock.  Shoots nice, though, and it's an interesting feel to compare against my Kahr CW 9.

It's a powerful addiction, isn't it?  While out and about today I saw this: 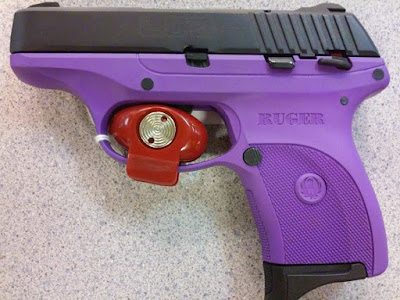 ...Fall can be forgiven for being the prelude to Winter. 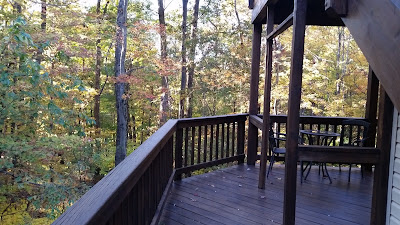 Posted by ProudHillbilly at 2:34 PM 4 comments:

We spend a lot of time cleaning guns just so we can get them dirty again... 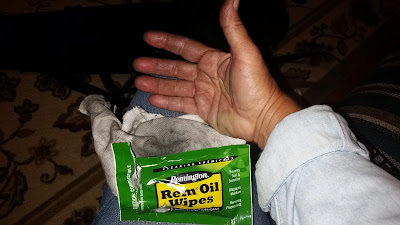 Posted by ProudHillbilly at 10:33 AM 7 comments:

For sale.  I plan on bring it to the blog shoot this Saturday if anyone would like to contemplate buying it or knows someone who might like to buy it. 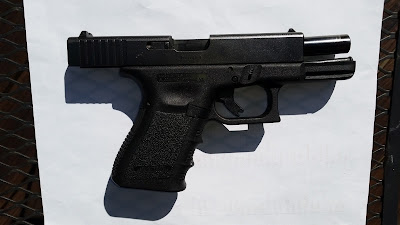 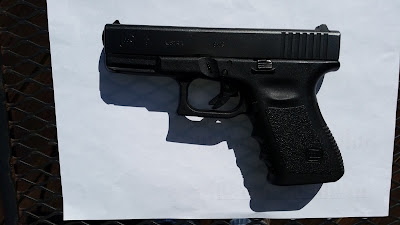 It has some wear, but I've tried to keep it clean.  Which is pretty easy - Glock has made a gun that has few parts and will eat pretty much anything you give it.  It will take a licking and keep on ticking...ok, I'm showing my age with that.

I've just finally realized, after working with the single stack 9 of the Kahr, that the grip on the 19 is just too chunky for me.  I can't shoot well with it.  My hands are too small for the grip.  I'm sorta sad about it but it's really not even worth me playing with it for grins and giggles.  There are just too many guns out there that fit me better.

It comes with a good Blackhawk carbon fiber holster and a couple magazines.  And a some fond memories because it was the second gun I bought and I've learned with it.
Posted by ProudHillbilly at 4:38 PM 5 comments: 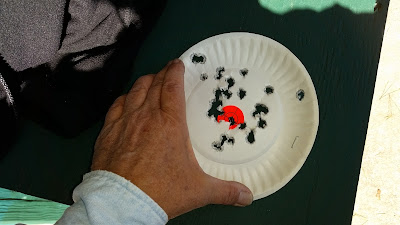 Posted by ProudHillbilly at 12:00 PM 6 comments:

And not.  Because there are so many whose heads will be bouncing up and down in agreement and those people breed and vote.

The governor of Virginia has decided to make his state safer by outlawing open carry in government buildings.  Yeah, that'll do it - making a potential killer carry concealed instead of open will stop a mass killing in its tracks.
Posted by ProudHillbilly at 5:55 PM 7 comments:

Happy Birthday to Me

Well, OK, today isn't my birthday.  But the mortgage company was balancing its escrow books and lo and behold I have been paying too much and they sent me a check for the overpay.  And although I can't indulge completely, I can indulge a little bit.  Guns are like potato chips.  And pets. You can't have just one.  And I don't have nearly enough. So... 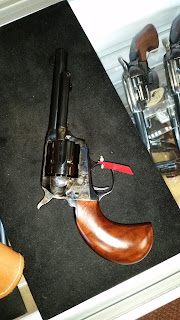 .38 sp from Taylors and Co. down in VA.  A Ubertti.  Was hoping to get a .38/.357 but the bigger frame for that causes me to have to reach awkwardly in order to cock each time, which in turn causes me to shift the gun each time.  Since it's a single shot - nah.  It's a grins and giggles gun.  It doesn't have to put plate-sized holes in zombies.

And because I bought it in VA, I couldn't walk out with it.  Has to be transferred to an FFL up here.  Sigh.  Puts a damper on the whole instant gratification thing.

Posted by ProudHillbilly at 8:42 PM 10 comments:


It starts getting interesting at about 4:50 minutes.
Posted by ProudHillbilly at 6:00 PM 4 comments: