...near Lake Gaston in Virginia.  In one of those little family graveyards you see along the road and in fields sometimes. 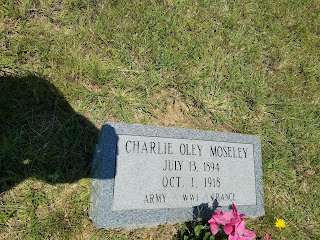 With eternal gratitude for your service and sacrifice, I salute you, young Charlie Moseley.
Posted by ProudHillbilly at 5:46 AM 5 comments: 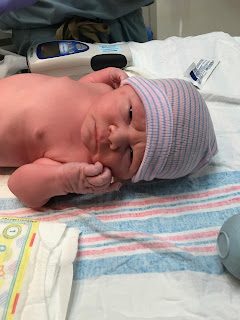 I'm a great-aunt as of a couple hours ago.  Considering that there won't be another grand-child, I've been darn near as anxious about this as I was about becoming a grandmother.

But look at his expression.  He was head down more than a month ago.  Then he turned himself back around again.  He looks pissed off to be here.  And I suspect it bodes ill for his parents...
Posted by ProudHillbilly at 1:58 PM 4 comments:

Once again there is much wailing and gnashing of teeth.  There has been a muslim attack in a European country that's way more concerned about diversity than their own lives.  So what else is new?  There've been nearly 31,000 islamic attacks throughout the world since 9/11.  But now everybody is complaining that there wasn't enough security at the concert they blew up.  Everybody is scrambling to change the way they deal with concert security.  And, oh yeah, "He was on their radar."  But they didn't do anything about that. Again. They can't do anything about that now, either, because he's dead.  Along with more than 20 young people and children who would be alive today if there wasn't so much Stupid around.

Here's a suggestion.  Instead of crying in horror after the rabid dog has run rampage and torn up a bunch of people, how about inoculating the damned dog beforehand?  How about you stop muslim immigration, start monitoring mosques, and when you know somebody is talking about, oh, blowing things up, you give them a one-way ticket back to whatever 3rd world cesspool they crawled out of?

It's just a thought. 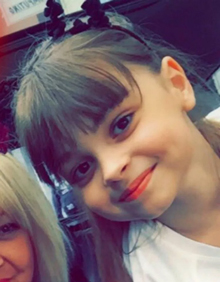 Posted by ProudHillbilly at 2:40 PM 2 comments:

And In Other News...

...Flitter loves me.  Flitter being the other mother of kittens, the one who, although spayed, is too wild to come in.  But she desperately wants company - she comes to the back door and rubs against it and purrs and does happy paws if I come over and put my hand against the glass where she is.  Yet if I try to open the door she's gone in an instant.

But.  Nearly every day she leaves a gift in that spot.  I'm happy with the dead voles.  Not happy with the dead birds - goldfinches, chipping sparrows, wrens, chickadees.  Tonight I switched on the light and watched her chase a mouse around the deck.  It will probably be tomorrow's gift.

She loves me, but as usual love's a mixed bag.
Posted by ProudHillbilly at 6:54 PM 3 comments:

On the one hand, James Comey's testimony under oath that there has been no political interferance with FBI investigations.

On the other hand, a Comey associate calls a so-called reporter and reads them a piece of a memo he supposedly found in which Comey says that Trump asked him to drop the probe of someone who had already been fired and whose reputation was already shot.  Not the full memo, a piece of a memo.  Said memo has never been seen by anyone except the Comey associate at this point.  But the so-called reporter and his so-called newspaper run with it as proof that Trump tried to interfere with an investigation.

Let's just drop the fact that this standard is below that of the National Enquirer for journalism.  Nobody has seen or even heard the full memo.  But let's say it exists.

Which time did Comey lie - under oath or in the memo?
Posted by ProudHillbilly at 3:32 PM 6 comments:

I haven't been posting because...Stupid.  There is so much stupid that I seriously wonder if perhaps Darwinism is in full swing and it's the end of Homo Sapiens.  Because if there are as many Stupids as there seem to be our species absolutely deserves to end.

Don't even get me started on Obama's climate change speech earning a gazillion dollars while leaving a carbon footprint larger than I do in a full year.  Effing idiots.  Who need to explain to me how humans were responsible for ice ages and the warm periods between them long before humans had much to do about anything.  But they can't.  Because the Bill Nye worshipers, the Obama worshippers, the Gore worshippers are dumb as posts. Period.  They wouldn't know science if it jumped up and bit them in the butt.

And then there's Comey.  He's either scum because it's all his fault Hillary lost or he's a hero because his FBI has an investigation going into the non-existant ties between Trump and Russia.  Because people are too stupid to accept that Hillary is a totally corrupt peice of crap who has zero successes to show for her political career and a long, easily proven track record of complete corruption that should have led to her indictment ages ago.  She has a vagina.  And that's ALL her voters voted for.  So did Lizzie Borden and Lucretia Borgia.  But rubbing two brain cells together would be hard. So just be glad you freaking idiots that Hillary isn't in jail right now.  Because better people than her have gone to prison for less.

And of course Planned Parenthood is freaking out.  Because CEO Richards earns nearly $900,000 a year and that seems to be a bit in danger.  Note that that is the salary of just one of the board of directors of a supposed charity recieving MY tax dollars.  Because liberals despise choice.  My choice is not to fund an organization that pays its board millions and provides little other than systematic killing of human beings.  But libs, as I have said for decades, despise choice and are freaking at the idea that at some point I may have one.  Nasty, ugly, stupid people.

And the protests.  How do these people manage to go out every whip stitch to scream and torch things?  I have property, people, and animals to take care of.  I don't have time to run around busting things up no matter how pissed I am. Yet they are constantly running around in vagina hats and gay pride stripes loudly demostrating how foul mouthed and intolerant they can be about this and that. And wrecking stuff and attacking people who don't believe the same as they do.  All I can think is don't bring that crap around me.

Posted by ProudHillbilly at 7:31 PM 6 comments: