So Punkin's stomach has been sounding like something from "Alien" is going to pop out any minute.  And I was in front of her when she suddenly leaned forward.  And for some reason I reached out, hands together, palms up, as if to catch something.

I did.  Her breakfast. 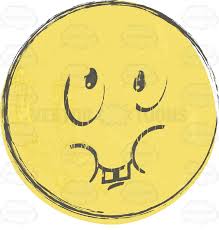 Posted by ProudHillbilly at 11:00 AM 4 comments:

Two sexual predators.  One charged with assault, one celebrated in the Democrat Party, even the key note speaker at their last convention. 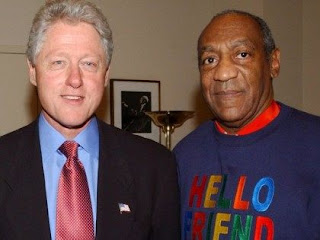 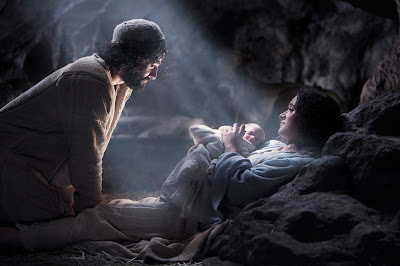 And may all of you have a blessed and merry Christmas!

Posted by ProudHillbilly at 7:39 PM 7 comments: 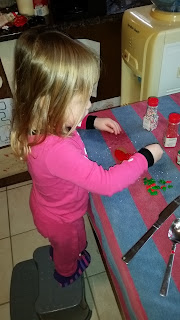 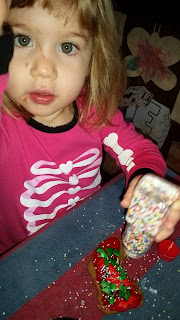 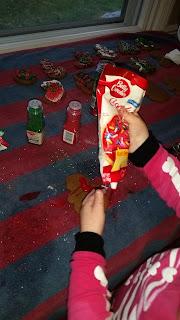 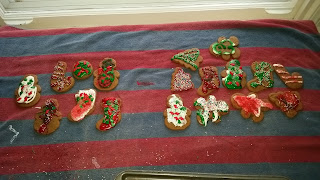 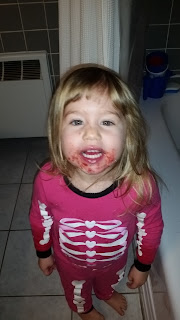 And then came a bath.

Posted by ProudHillbilly at 7:13 PM 4 comments:

I'm posting from a cell phone, so I apologize for the lack of detail.  But that whole one finger typing thing...

You may have heard about the school distrinct in Kentucky that decided that "A Charlie Brown Christmas" play could only be performed if the actual references to the religious reasons for the season were left out.  I don't know about you folks, but the part of the original that I remember best is the part where Linus recites the Bible passage that explains it all.

This came about because one, count 'em, one, person complained.  Instead of doing the decent thing and just not going to or allowing their child to participate in the play, they whined.  And the powers that be, completely ignoring the part of the Constitution that says that there can be no interference with the free exercise of religion, put their jackboots down.

But this time the parents stomped back.  And when the play reached the point where all that horrifying religion comes in but had been barred, they were ready.  And they stepped up and read the passage aloud as a group.

You can read the story at http://www.weaselzippers.us/246282-parents-read-bible-verses-cut-from-charlie-brown-christmas-school-play/, including a video that I couldn't figure out how to imbed from my phone.
Posted by ProudHillbilly at 7:16 PM 4 comments: 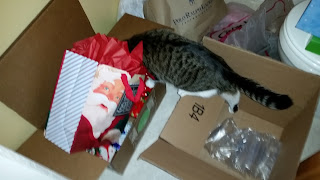 Posted by ProudHillbilly at 9:45 AM 5 comments:

I needed gas.  I live in the eastern panhandle of West Virginia. I don't know why the stupid is so strong here but we are still paying $2.15 - $2.25 here.  But slide just south into Virginia and you can get it for $1.79 for cash.  AND in order to do that you have to drive right past the shooting range.  Well, alrighty then.

The Baretta has a loooooonnnnngggg trigger pull in double action.  And I need to get the feel of that - in a self defense situation that first shot is going to be the most important.   I put a target out at just short of 25 yards and started working on the first magazine of ammo.  At some point I realized that the four others on the line were watching me.  And when I finished and stepped back, one of them said to me "I'm NEVER coming to your house uninvited." 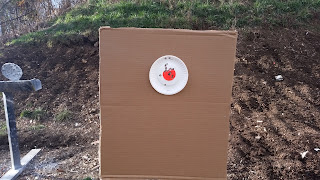 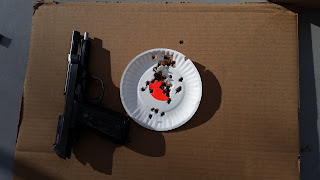 Today was diamond.
Posted by ProudHillbilly at 4:51 PM 4 comments:

Email ThisBlogThis!Share to TwitterShare to FacebookShare to Pinterest
Labels: great shooting day, I LOVE MY BARETTA

Do you ever have those weird nights where, at least at first, you only fall partially asleep?  Not like the times you thrash around wide awake, but more of a limbo where you aren't there and you aren't here either.  Been having trouble with that the last few nights.  And then there was music...  Huh?  When I got awake enough to focus I realized that it was the theme from "Downton Abbey", which I had been watching before bed.  I had closed the laptop, which generally sends everything into sleep mode, but apparently the computer woke up for a couple minutes.  It stopped, but that was a bit freaky and not conducive to easily going off into slumber land immediately after.

This is really about my new used Beretta 92S.  How to put it succinctly?  Oh, yeah - I LOVE THIS GUN! 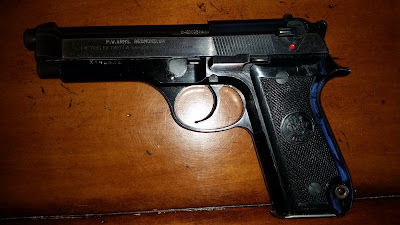 Purchased for under $340 from Southern Ohio Guns International, it arrived in beautiful condition.  There isn't a working part of it that doesn't slide or click smoothly.  Because it is an Italian import, I had to go to the proof marks near the trigger to track down the date of manufacture: 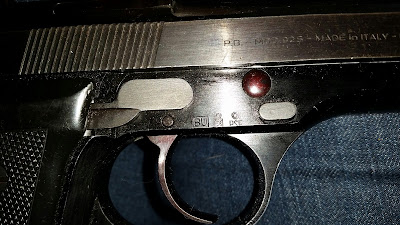 The original Beretta 92 was introduced in 1976.  The "S" series was developed in 1978 in response to law enforcement requirements and was then adopted by Italian police and military.  The "BU" inside the little box means a 2004 birthday for this particular gun.

It's a full sized and substantial gun, a little over 2 lbs unloaded, and it carries 15 rounds of 9 mm.   There's a couple things I'll have to get used to.  First, having a de-cocker.  I commented about that to my daughter and she replied "Talk to Loreena Bobbit."  Took me a minute...  Anyway, I remember to de-cock the gun after I rack the first round but tend to forget to flip it back up before I holster the gun.  The other is the placement of the magazine release, which is at the base and back of the grip on one side.  I'm used to having it on the upper part of the grip near the thumb, but apparently the Europeans don't like to just drop their mags.

The double action is heavy for me - at first I thought it would take some work to get my hands strong enough to fire it double action.  But a few timed trials on Saturday showed me that although I'm rocky with that first shot I can do it and clear the plates fairly quickly.  I just need to get used to it.

And Then The Day Went To Shite

Yesterday was a pretty December day, crisp but warm enough that I could take off my jacket to shoot.  Which was just what Murphy's Law and I did.  I in particular wanted to get out and try my new Beretta 92S, which I picked up Friday evening.  Then lunch and me home to pick up the mess I made in the TV room when I wrapped and packed up the out-of-state Christmas presents so I could get them in the mail.  And to clean guns in front of Netflix.

All was well until I stepped out on the porch to feed the outside cats and saw one of them, Greybie, go into a seizure.  I knew immediately what was happening - Blu had them later in life.

Greybie is just one of many examples of why I often dislike humans - an abandoned sweetheart of a cat that just wants a lap to sleep in, full of happy purrs for ear scratches.  When he first showed up a few months ago he alternated houses and one neighbor accidentally trapped him while trying to trap a feral, so she just took him and had him fixed while she had him.  After that he took up residence on my porch, happy for my company when I sat with my coffee in the morning when the weather allowed.

Unfortunately, because Blackberry has so many problems and is so elderly, I don't feel I can bring any more cats in the house right now.  I don't fell I can add that stress to her life.

I can't give the outdoor cats the same care the indoor ones get, but if I see something wrong I take them in.  About a month ago I realized that Greybie's face had swollen a lot.  So I shoved him in a carrier and took him to the emergency vet, to be told that he had an oral cancer.  There is a fairly new medication on the market that is injected directly into a tumor, and often causes a tumor to attack itself and basically rot itself away.  It's a Hail Mary treatment, but we tried it.  I took him back for the second injection as well as antibiotics for his gums, and he seemed to be doing well.  The swelling had gone out of his face and he had a good appetite.  Until the last couple days - I noticed he wasn't eating all his food.  And then the seizure.  Which pretty much said that the tumor had spread to his brain.  While an x-ray was useless because it wouldn't have been able to see through the skull, there were other signs, and the vet agreed that I was probably right.  So I held him and cuddled him and apologized for the assholes who didn't appreciate him, who didn't let him be their loving lap cat but turned him out instead, as he purred and then slipped away.

You will take up a collection for me, right?  The one I'm going to need for bail if I ever catch someone dumping an animal up here.  Because I've had to have three put to sleep because of irresponsible idiots, and I'm getting tired of bearing both the financial and emotional burden of people that I like way less than I like cats and dogs.
Posted by ProudHillbilly at 8:23 AM 6 comments:

I'm NRA You Hate I Am

With thanks to buzzamonkey for permission to use:

For the younger folks, here's the tune itself:


Posted by ProudHillbilly at 6:55 AM 4 comments:

Email ThisBlogThis!Share to TwitterShare to FacebookShare to Pinterest
Labels: NRA

Yeah. Now pull the other one. 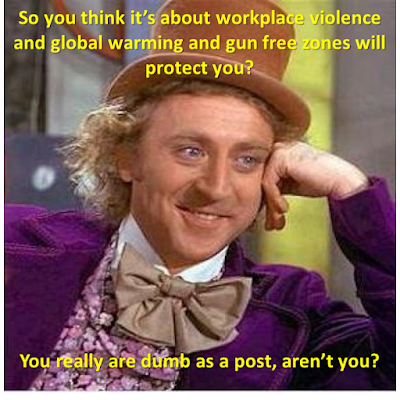 Posted by ProudHillbilly at 9:26 AM 3 comments:

Email ThisBlogThis!Share to TwitterShare to FacebookShare to Pinterest
Labels: liberal is the synonym for dumb 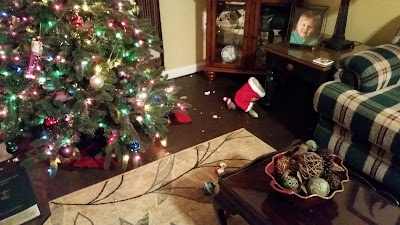 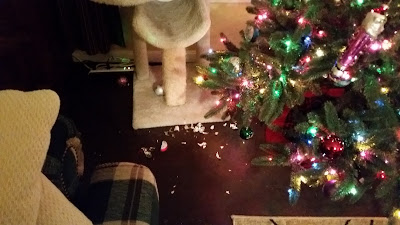 I went out to dinner with a friend....

Scooter now has assumed the mantle once worn by Blu - Destructo Kitty.
Posted by ProudHillbilly at 8:06 PM 8 comments: