I thought this might be a good idea.  Let Mama in and out, give the kittens a view of the wider world. 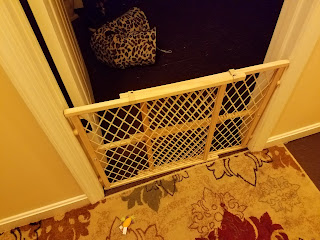 OK, they didn't have a way of displaying their climbing skills before. What I got was JAIL BREAK!  Now I'm trying to stop laughing at a passel of kittens let out into a bigger world long enough to decide what to do.


Blackberry, my eldest, looked at them with a "Meh" expression and then returned to insisting that I pet her.  Perry and Scooter are playing with them.  Mama is watching,   I'm thinking that at 7 weeks they are ready to explore a bigger world, anyway.
Posted by ProudHillbilly at 7:40 PM 2 comments: 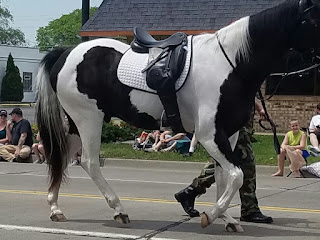 Posted by ProudHillbilly at 7:50 AM 4 comments:

...having family whose home is like a vacation place to the rest of us.  A perfect summer day on the back deck interupted by a t-storm?  No problem.  Inside ain't bad either. 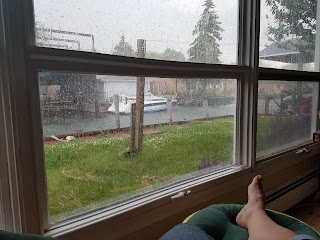 My daughter the conservative social worker may be having a bad day.  She sent me this: 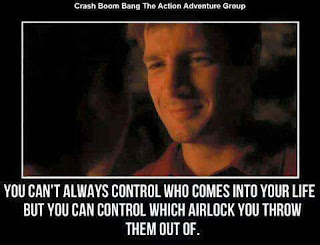 Posted by ProudHillbilly at 3:34 PM 5 comments: 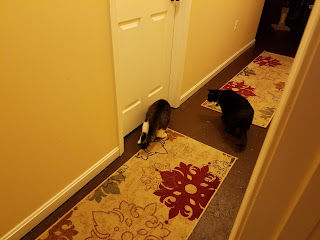 "But now that you've let me see I'm pretty sure it shouldn't get out." 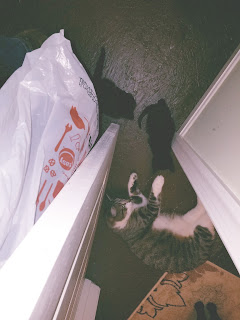 Could have caused a rude surprise.

Have you ever been doing something automatically and then had something niggle at you that said you had done something off?  I was going merrily along, cranking out 9 mm, when I realized that the funny feeling I had was because at one point my right hand had reached to the wrong spot to pick up a case to seat a bullet in.  I had taken out of the bin of primed shells rather than the rack of shells that I had put powder in.  A few movements back.  And now somewhere in the jar was a cartridge with bullet and primer but no powder. 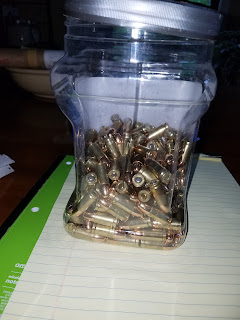 Oh, great.  I put a note to myself in the jar and set it aside.

Finally got around to thinking about it yesterday.  I really didn't want to just pull bullets until I found the bad load.  Got the scales out and started weighing and looking for patterns of weight within the different brass manufacturers.   Weighed every one. The bad one was the second one I pulled. The first one was a 9 mm Makarov that got by me when I was setting primers and shouldn't have been in there anyway.

I'd have been really annoyed if I'd had to knock every one of those apart.  And now I'll remember to do what I usually do but neglected to do that day - only keep one stage of loading components on the bench at a time.
Posted by ProudHillbilly at 3:01 PM 2 comments:

Email ThisBlogThis!Share to TwitterShare to FacebookShare to Pinterest
Labels: neatness counts as well as saves on mix-ups, reloading

Another Day In The Life... Update

...of the unexpected kitten mama.

Two black, two calicos, one grey and white, six black and whites.  So far, three have been named.  First name went to Snugs, short for snuggly. My lap is his happy place. 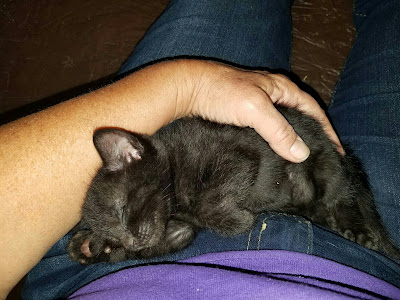 As soon as I sit down, he wants to play. Then he climbs into my lap when he wears out and passes out immediately.


They're like toddlers. They romp and then collapse and sleep. These two are sound asleep. 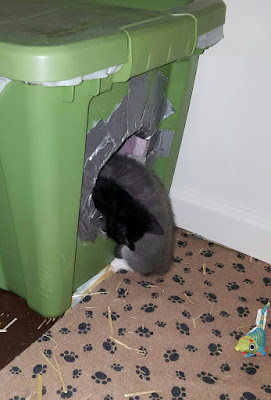 The second, one of the calicos, became Polly when I noticed that she is a polydactyl.  Six toes on each front paw.  Cali seems a logical name for her calico sister.

That's as far as I've gotten.  I'm just beginning to distinguish the black and whites by the patterns on their faces.  But no names have presented themselves for anybody else yet.

They mostly have the litter pan thing figured out but I'm still cleaning up some messes.  I don't know if someone doesn't like the pans or if they are like toddlers being potty trained - romping makes them forget until too late.  On the other hand, this project just started Friday night, so I may be wanting perfection too fast.

Mama goes to the vet for a check-up, blood work, and rabies shot on Thursday.  If I had known how easy she was to bring in she would have come in months ago.  I am so hoping her blood tests come back clean, because she's a darling.  And my other cats are not at all put out by her presense.  She has slipped out a couple times and gone off exploring, and the most that has happened was that Scooter sniffed her butt. Blackberry, who I thought would be the most put out, looked at her, then went back to sleep. Perry was equally indifferent.

Flitter has proved too wiley for the trap so far.  On the other hand, I've caught neighbor's cats Puddy once and Winston twice.  Winston just looks at me, gives a little meow, and goes up on the porch.   I'm still anticipating finding a racoon in there. 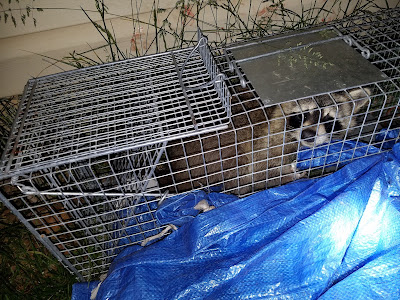 Posted by ProudHillbilly at 6:10 PM 3 comments:

Yer Cuteness Quotient For The Day

Let me know if the video won't play.
Posted by ProudHillbilly at 8:00 AM 11 comments:

It's Been An Exciting Week In Lake Wobegone...

But the flippin' computer won't let me do much so I'm doing a cell phone mini-post.

I'm trying to be sick again.  Something going on in my left eustachian tube.  A second doctor run today 'cause I felt like hell. But the GP can't see anything more than a bit of swelling so they are trying to get me into an ENT next week.

Just when a complicated problem is in need of my full attention. 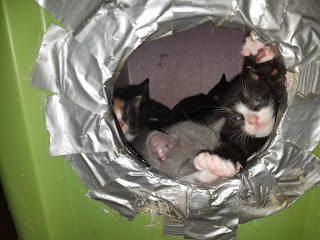 11 of them.  Two litters born in the same box on the same day.  In my garage.  They are now in one of my spare bedrooms along with one of the mothers.  I'm still trying to trap the other mother but the vet said that since they are now old enough that they are eating solid food they would be OK with just one nursing mother.  And the problem is that not only do they need to be socialized to be adopted but their mothers could get pregnant again any time now - it's been 5 weeks.  At least I've got 12 of the 13 problems "off the street." The county Animal Welfare League will be by in a couple days to inspect the cattery arrangement.  I'll sign the kittens over to them and they'll put them into their adoption system while I foster them.  That gives me access to their vet services and list of folks who want kittens in about 6 weeks. We also have a really active trap, neuter, and spay group up here so photos and updates are going to them as well.

I love cats.  But I can tell already that it's going to be a long 6 weeks.  First realization -  I have no idea how to pan train 5 week old kittens.  Ick.  I'm hoping Mama, who IS pan trained and is happy as can be to be inside, will do that for me.  Right now I'm glad that room has no carpet and I'm doing a lot of cleaning up behind 11 furry behinds.

And although they sortof understand eating and drinking out of bowls, one of the calicos is a bit unclear on the water bowl concept. 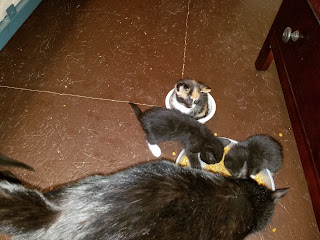 Posted by ProudHillbilly at 5:52 PM 9 comments:

And Then There Was...

... norovirus.  Compared to the standard flu, norovirus passes through much more quickly.  But I think I might prefer the week of flu to it.
Posted by ProudHillbilly at 7:36 AM 8 comments: