This is one Christian you don't get to kill. 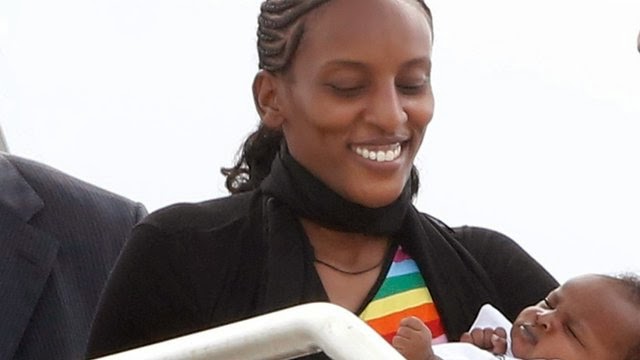 Meriam Yahia Ibrahim Ishag, sentenced to death in Sudan for apostasy even though she had never been Muslim,  made it to Italy with her family today after sheltering in the US embassy in Khartoum for a month.  Bravo Italy for flying them out and welcoming them to Italy.

Question, though.  Her husband is a US citizen - why didn't the US fly them out?

h/t Weasel Zippers
Posted by ProudHillbilly at 11:31 AM 12 comments:

So over at The Sheckel Aaron has been battling a plant that inspires much fear and loathing in me - poison ivy. 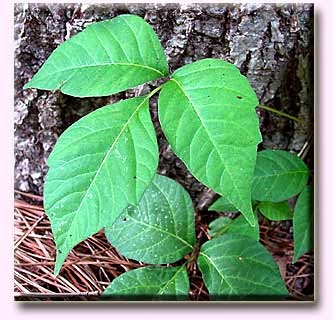 I've always been horribly allergic to it, to the point of ending up with large patches of scarring for years after some bouts with it.  The worst go round with it in my memory being after getting a horrible dose of chiggers in Guatemala, I got a round of poison ivy on top of the already chigger-damaged skin.  Yeah, that was weeks of misery.  The dose that I'm glad I don't remember is when I was 3 and the folks were burning brush. The brush had poison ivy in it, and I got in the smoke. Head to toe.  Mom said it was awful.  But at least I didn't end up in the hospital with it - I've heard of that happening when the smoke from poison ivy got in someone's lungs and eyes.

Posted by ProudHillbilly at 6:10 AM 13 comments: 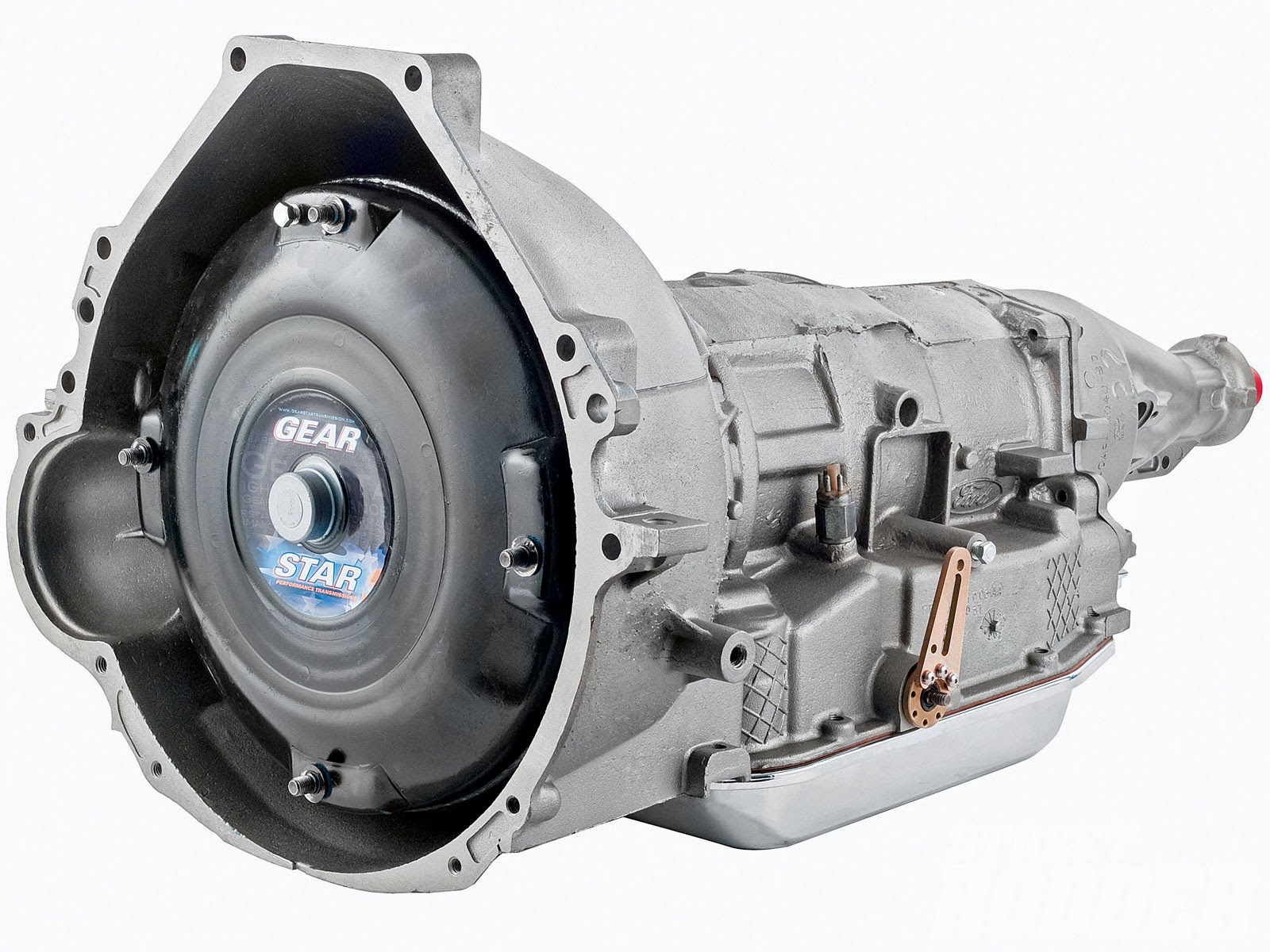 Update:  Refreshing honesty  from the guy who would make money if he did the repairs/replace - don't.  The cost verses the worth of the vehicle isn't worth it.  It's still drivable, but has no overdrive.  It will pass inspection.  Don't be jumping out in front of traffic.  Don't be doing serious mountain driving.  Next year, when I have access to my money pot without the severe tax implications of this year, deal with it.
Posted by ProudHillbilly at 12:30 PM 17 comments:

To end it.  As long as Hamas exists it will try to destroy Israel.  As with Boko Haram, there are only two options:  a miracle or complete destruction.   Neither Israel or Nigeria can wait any longer for a miracle. 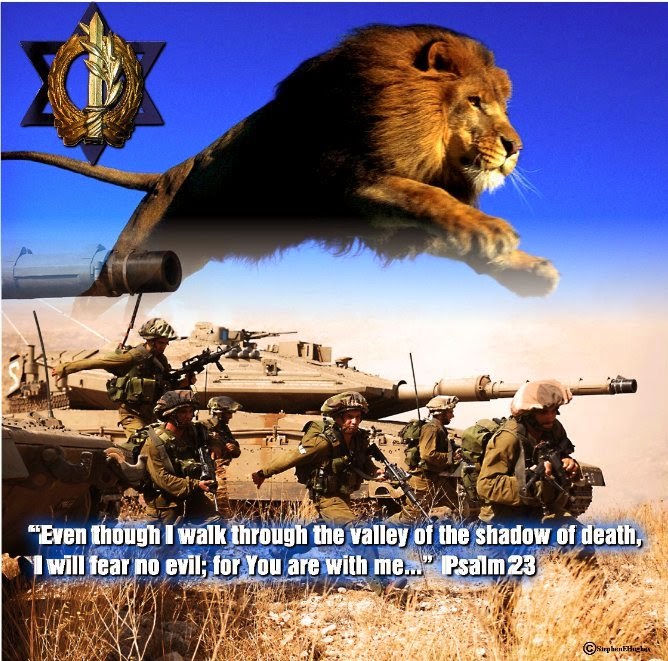 Posted by ProudHillbilly at 7:27 PM 12 comments:

Either Education or a Brain is Dead

And I thought it was bad that people don't have enough science education to be suspicious of globull worming hysteria.

I am, however, assuming that the original poster did it tongue-in-cheek and was surprised at the response. 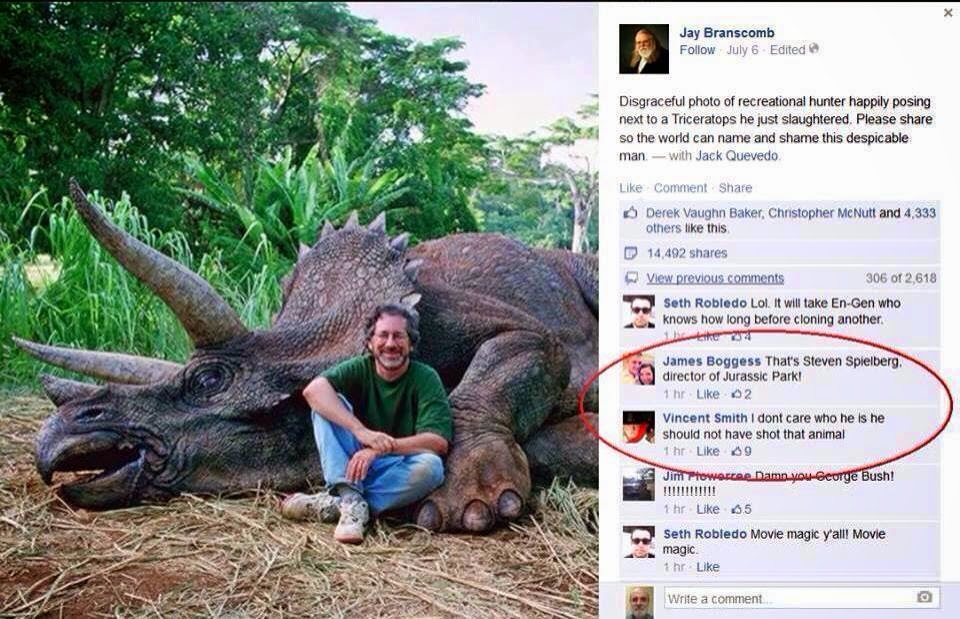 h/t Weasel Zippers
Posted by ProudHillbilly at 9:43 AM 14 comments:

Email ThisBlogThis!Share to TwitterShare to FacebookShare to Pinterest
Labels: been dead about 140 million years, common core education, it's a dinosaur dummy, stegosaurus 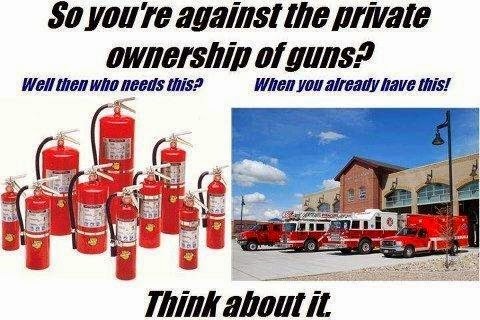 A Conspiracy Theory or Two. Or Ten.

Anxious to get the heck out of Dodge for a long weekend, I headed off Thursday to spend the long July 4 weekend with my sister east of Raleigh, NC.  Actually beat the traffic out.  Not so much coming back.

Hot dogs on the grill are, of course, a requirement on July 4 so an appropriately un-healthy dinner was planned and a close friend of my sister was invited.  My sister's friend will do anything for you. Really. At least my sister says so, and, in truth, she seems nice.  Except for the talking part.  You know the ad where the guy is sitting in front of a TV and his hair and everything is being blown backward with the force of what's coming out?  It's like that.  For hours.  Non-stop.  You have to understand - I'm a loner who likes people.  But I tend to only be able to be around others for a certain amount of time before I crave the quiet of my own company.  When we got back from the ordination I commented to a friend that I was "sociabled out" and she said I had done well - people know that I'm good with quiet and alone.

I also have a tendency to define conversation as "You talk a bit.  Then I talk a bit."  Apparently, not everybody shares that definition.

This year I figured I was prepped - I knew from meeting her last year what to expect.  I'd just smile and nod. All was good.  She hit the front door at 7 pm and was going full steam, with a voice so loud it was echoing outside.  But turns out that she's now deeply into conspiracy theories.  Especially if they involve UFOs.  And Bigfoot.  She's really into Bigfoot.  And she never stopped.  I know I saw food go onto her plate.  I know that then it was gone. I don't know when she stopped preaching long enough to eat it.  Did you know that 250,000,000 people have been abducted by aliens?  That humans have been to Mars?  That the shadow world government causes hurricanes, earthquakes, tsunamis?  That completely black, unmarked helicopters fly over her house every day and that the local juvenile correction facility has been converted into a prison camp for folks that oppose the government?  She'd look at me, knowing I'm in a science/math field, and say "You know about this, it's what you do." and I'd take a breath and start to try to explain the science of what she was talking about but wouldn't have time to get a syllable out before she went on at gale force.  HAARP and Tesla science.  The creation and guidance of Katrina and the Japan tsunami.  The assassination of Kennedy and removal of Khrushchev because they were about to reveal UFOs to the world.  And then there was the "fact" that the Pope went before the U.N. and announced that in the future the Church will baptize aliens and what a shock to know that the Vatican has a secret observatory out west, complete with a telescope named "Lucifer".  Because, of course, the Vatican is part of the shadow government.  Until 1:30 am.   Non-stop.  It was exhausting.  She doesn't just need a tin-foil hat, she needs an entire outfit and stock in Alcoa Aluminum. 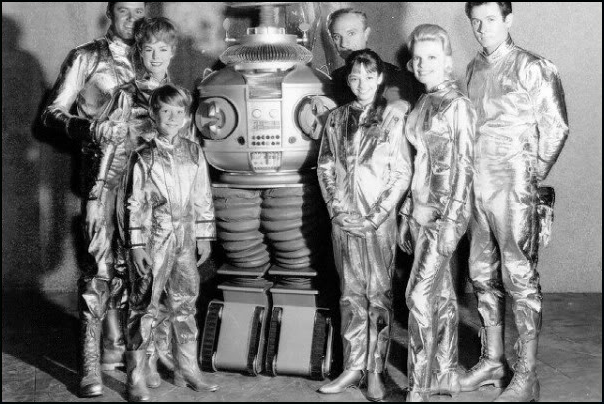 I would have asked her about Jewish control of the world and them using the blood of Christian babies to make matzos but a) it wouldn't have been nice, since she's a Messianic Jew (the fact that the world is ending was playing heavily in her beliefs) and b) I couldn't get a syllable in, let alone a question.

I have to agree with a couple things - don't put your trust in the government and the government is working on things we don't know about.  In fact, I think the UFO spike during the Cold War was because of people spotting test aircraft.  It seems that we are re-visiting that saucer technology now for our trip to Mars, too - the recent first test of a saucer shaped deceleration unit was successful and will be followed by more tests in 2015.  And yes, we did snatch every German scientist we could after WW II - we didn't want Joe Stalin to get his commie hands on them.  The Pope was reflecting on inclusivity when he used aliens as an analogy in a homily.  The Vatican observatory is part of an international group of observatories on a mountain in Arizona and the group next to them has named their telescope Lucifer. Which I think is funny.  Don't EVEN get me started on weather. It's so unmanageable that NOAA has to fudge the numbers in order to get it to LOOK like it's doing what they predict.

Yeesh.  I didn't know that people could put such a mish-mash of paranoia all in one bucket, to the point where I repeatedly thought "She needs medication."  It's OK to be paranoid at a certain level, particularly right now, when they really are out to get us.  But just like environmentalists are bad for the environment because of their emotion and lack of real science, a crazy conservative lost in paranoia and a lack of real facts is bad for all conservatism. 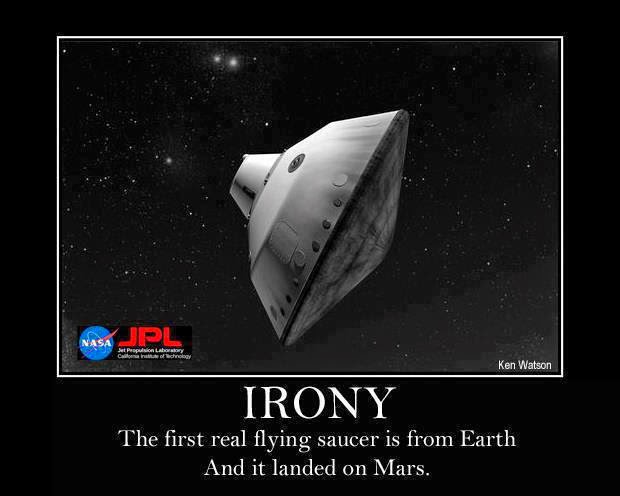 Posted by ProudHillbilly at 6:16 AM 17 comments:

You Are a Priest Forever...

It's been a hectic couple weeks, but mostly in a good way.  And the "run run run" business started with an event of great joy:  the ordination to the priesthood of a fellow parishioner, Justin Blanc, the son of friends.

The ordination Mass was scheduled to start at 11 am in Wheeling, WV.  Which would have meant a 5 am start.  No.  Not happening.  Some of us do not do early mornings well.  So: 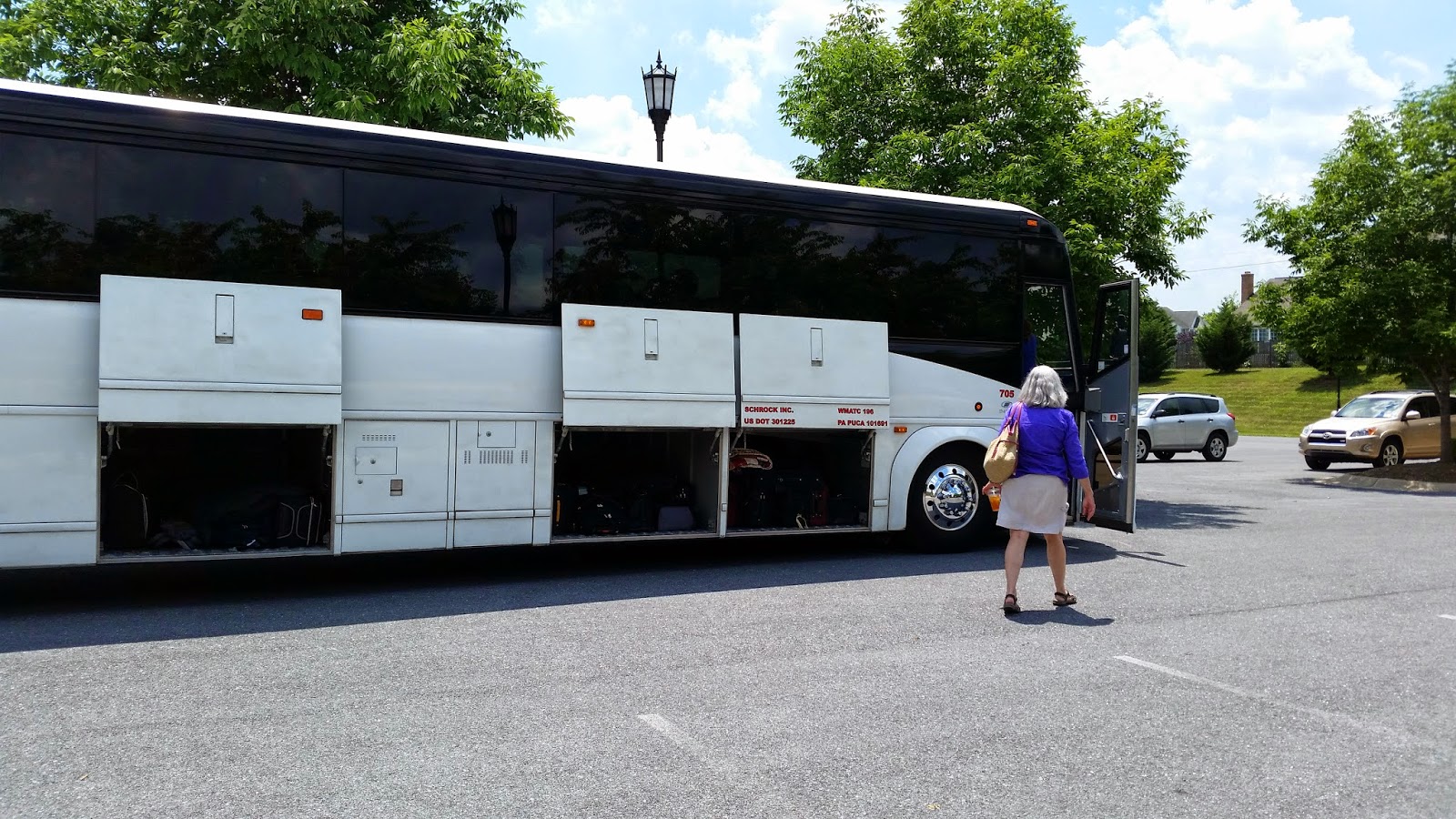 And a Hampton Inn two miles from St. Joseph Cathedral.  And, by the way, if anyone needs to spend the night in Wheeling, that particular Hampton Inn is one of the nicest hotels I have ever stayed in.  Evening prayers together from the Liturgy of the Hours and then a very pleasant time on the patio.  Then morning prayers and breakfast before an early arrival at the Cathedral so that our choir could practice. 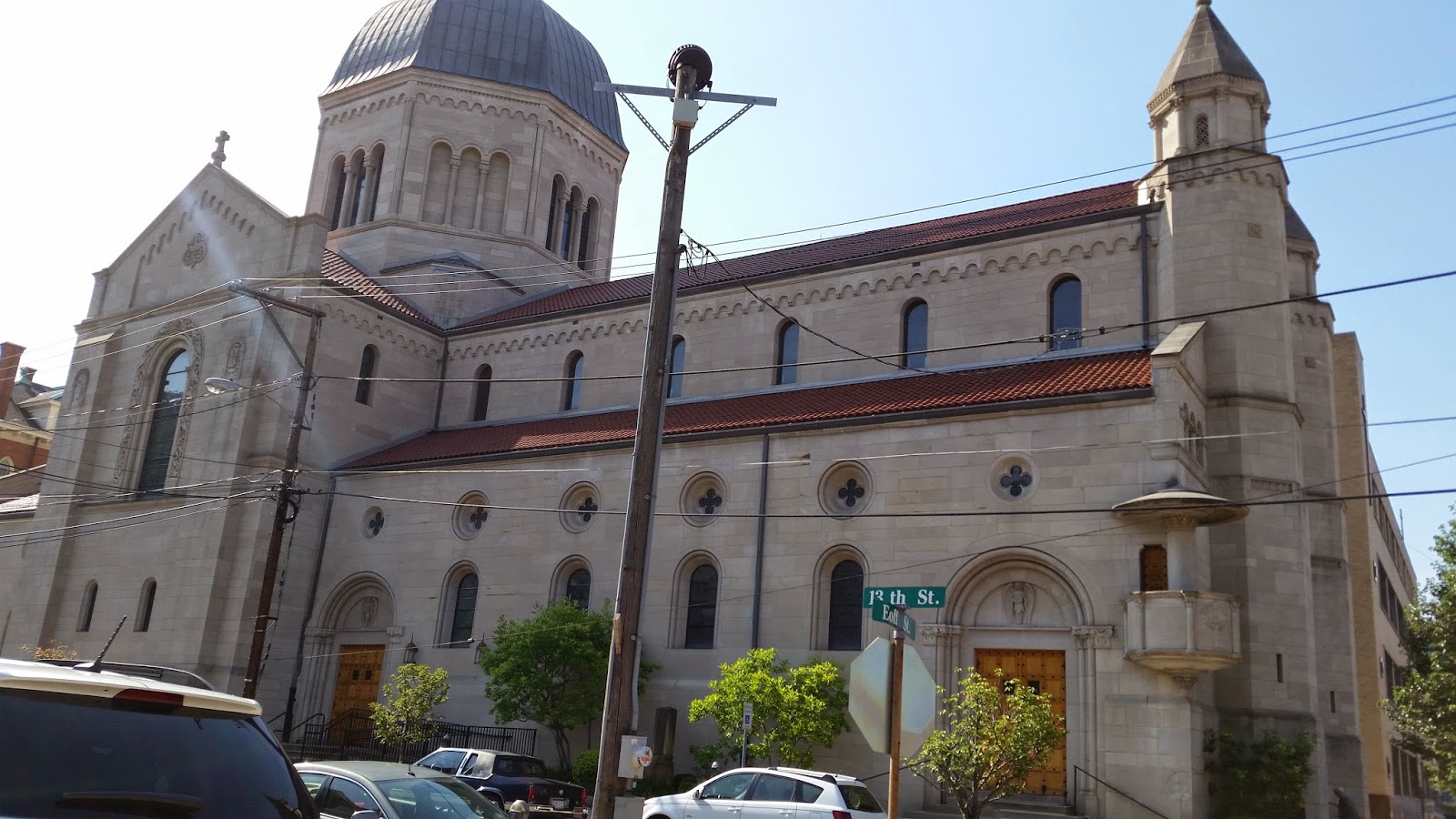 I had never been to the cathedral before.  It's beautiful: 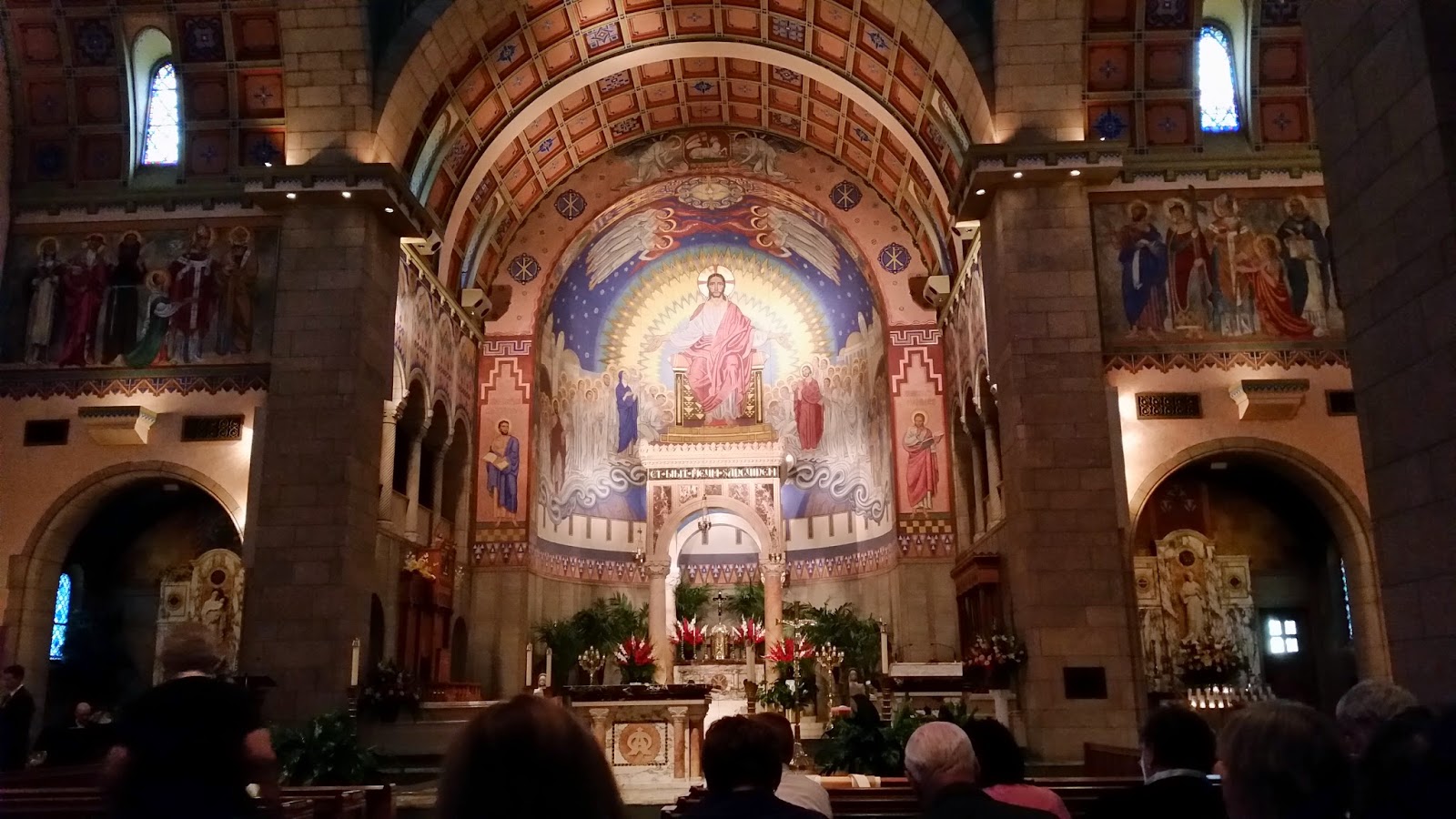 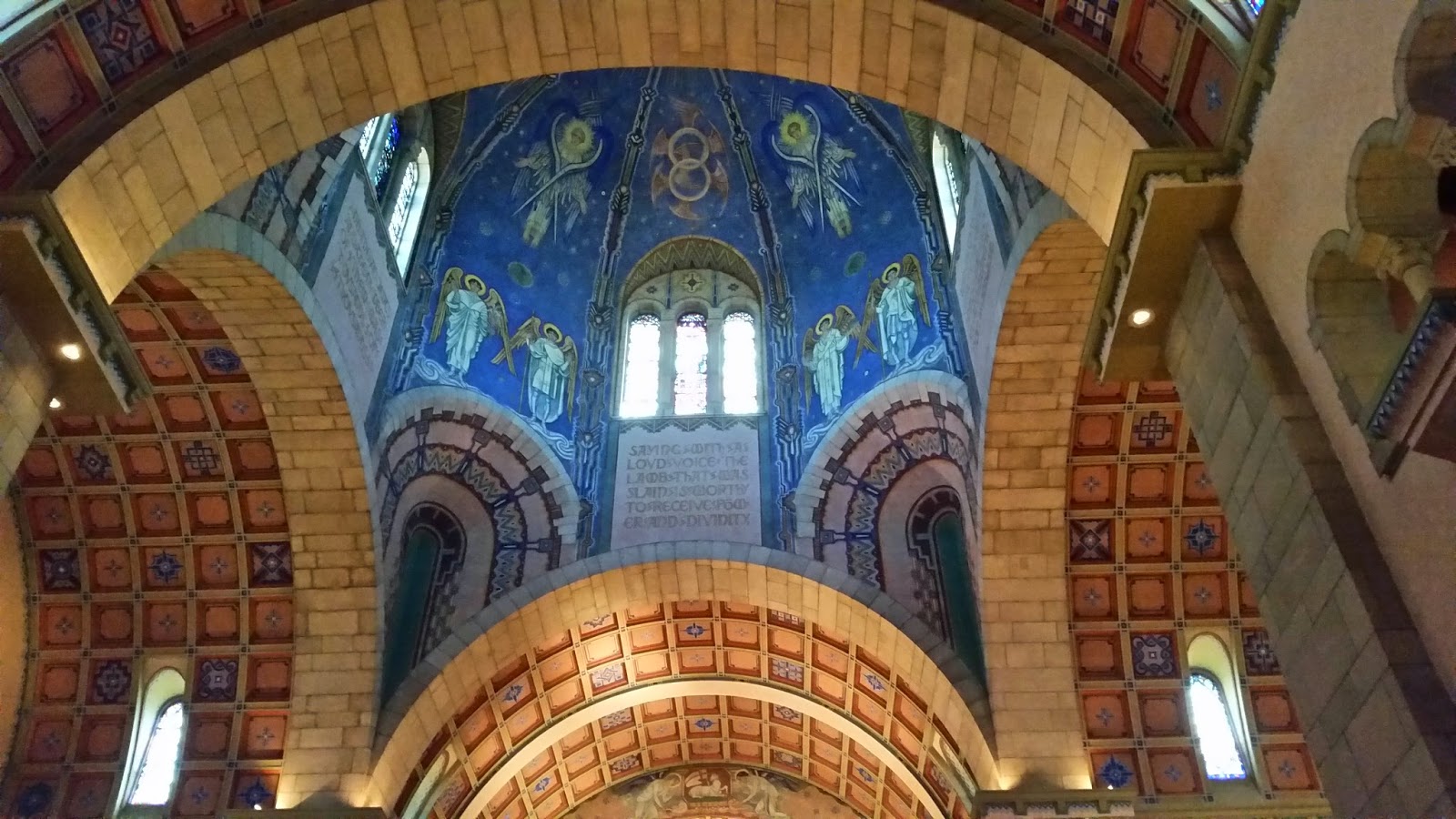 But it's small compared to my own parish church, which made me smile.  Sin of pride and all that.

An ordination is a powerful ceremony, full of symbolism. 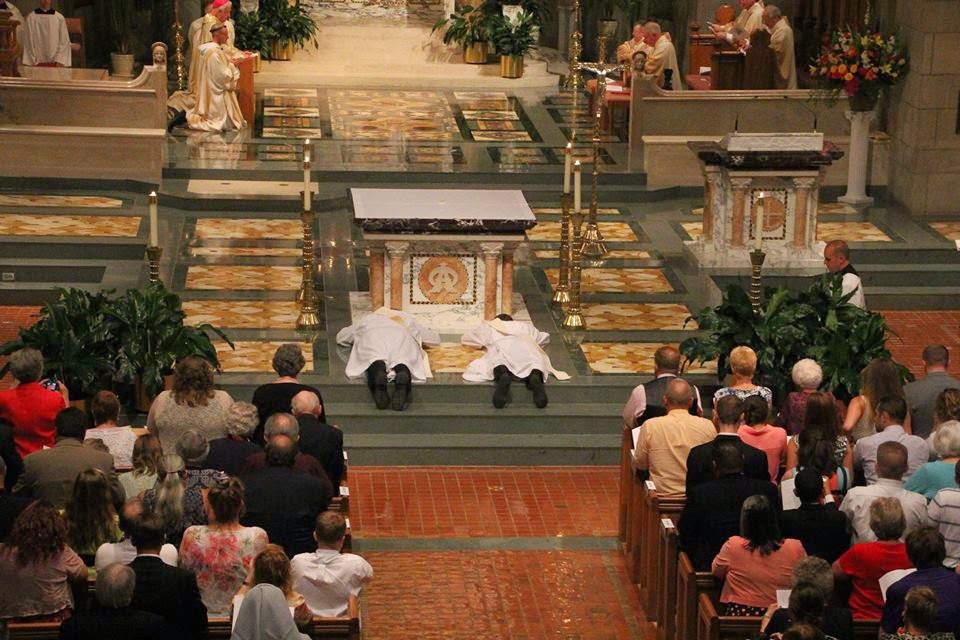 Led by the bishop and priests who come from all over the state for the event: 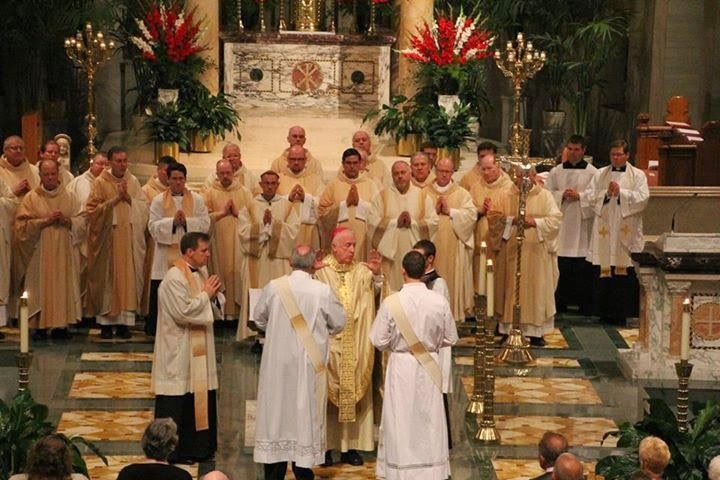 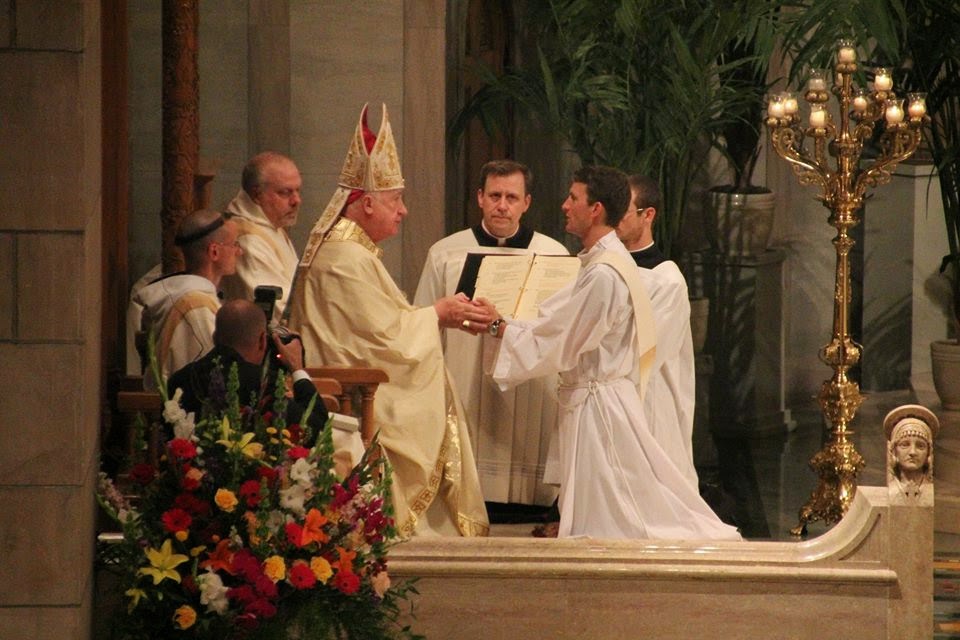 The trading of a transitional deacon's vestments for those of a priest: 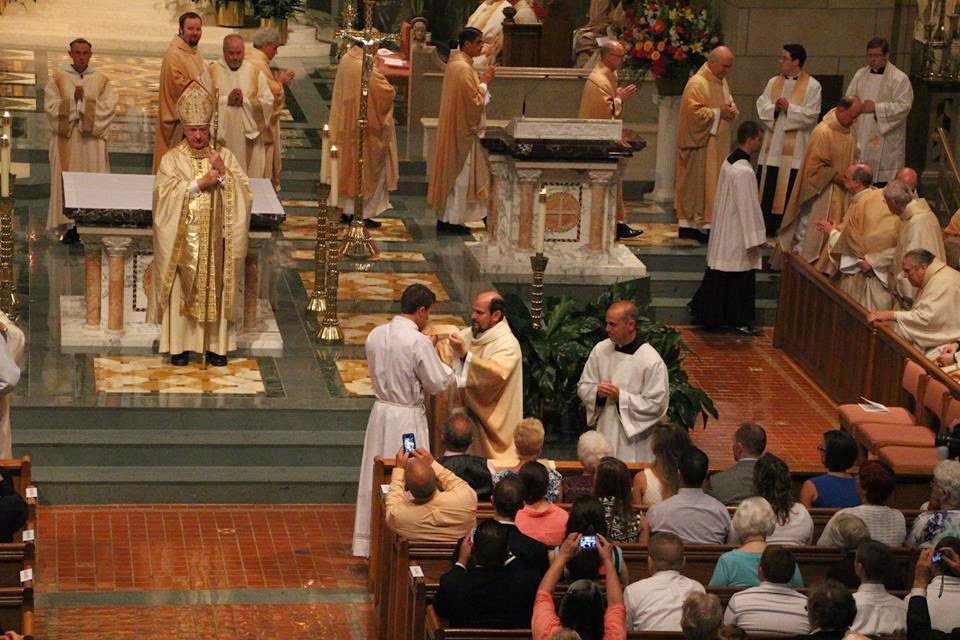 And the presentation of the new priests, here with our own permanent deacon, Deacon Dave Galven: 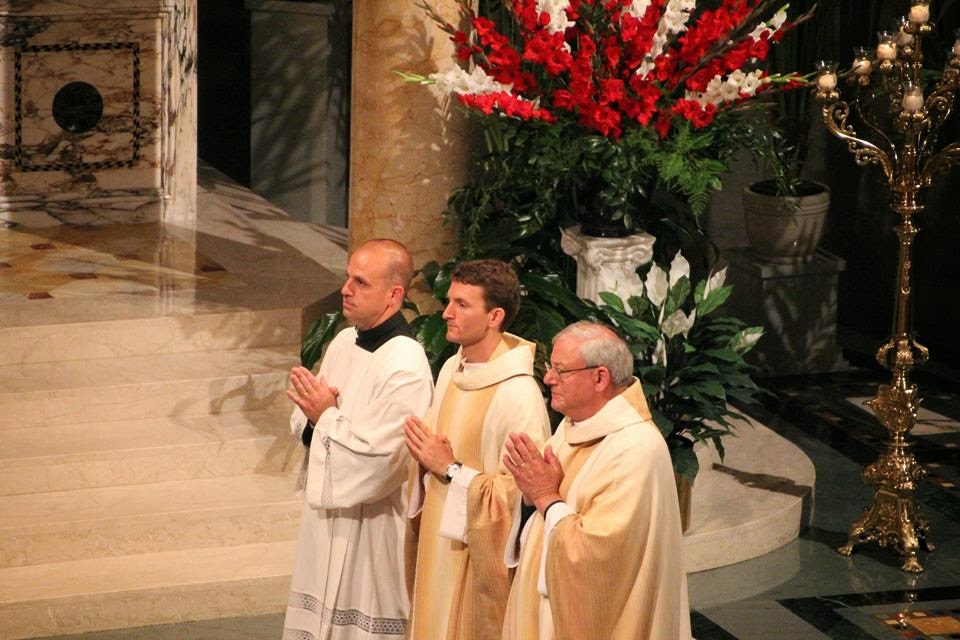 And then the new priests con-celebrate Mass with the bishop and brother priests who come to participate.

The next day Father Justin celebrated his first Mass as the principal celebrant at his home parish of St. James. 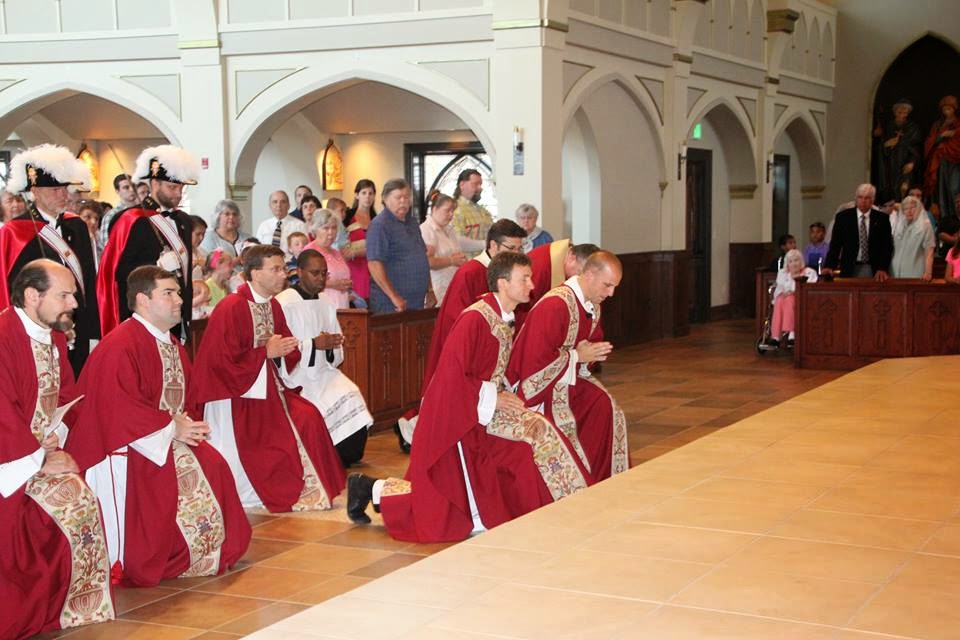 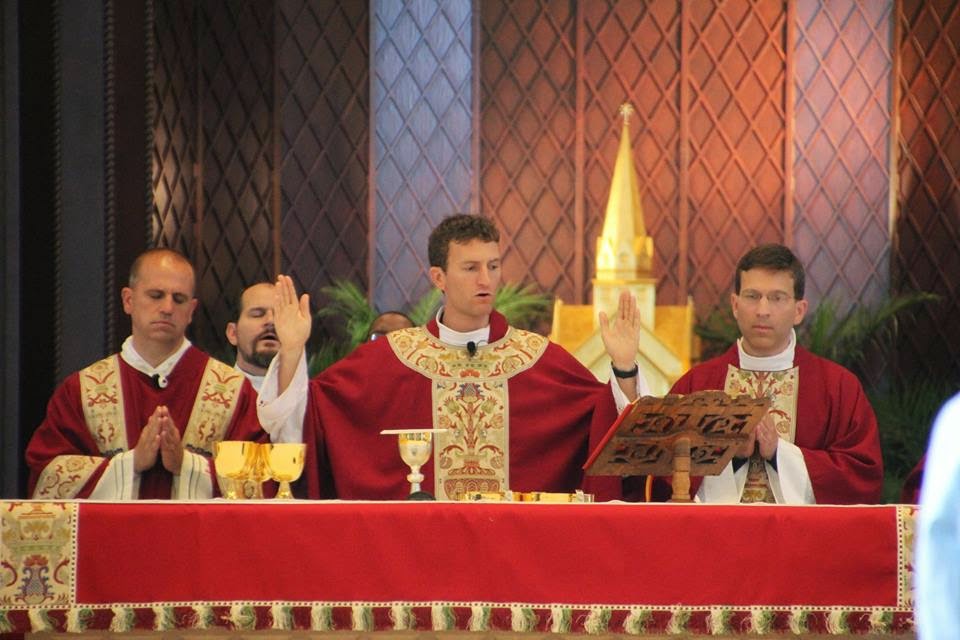 A lovely new tradition has started of presenting the towel used to wipe the oil of anointing from the hands to the new priest's mother, and the stole worn when the new priest hears his first confession to his father.  They will be buried with these.  Then, when they stand before the Lord and are asked what they have done for His people, they can show them and say "We gave a son." 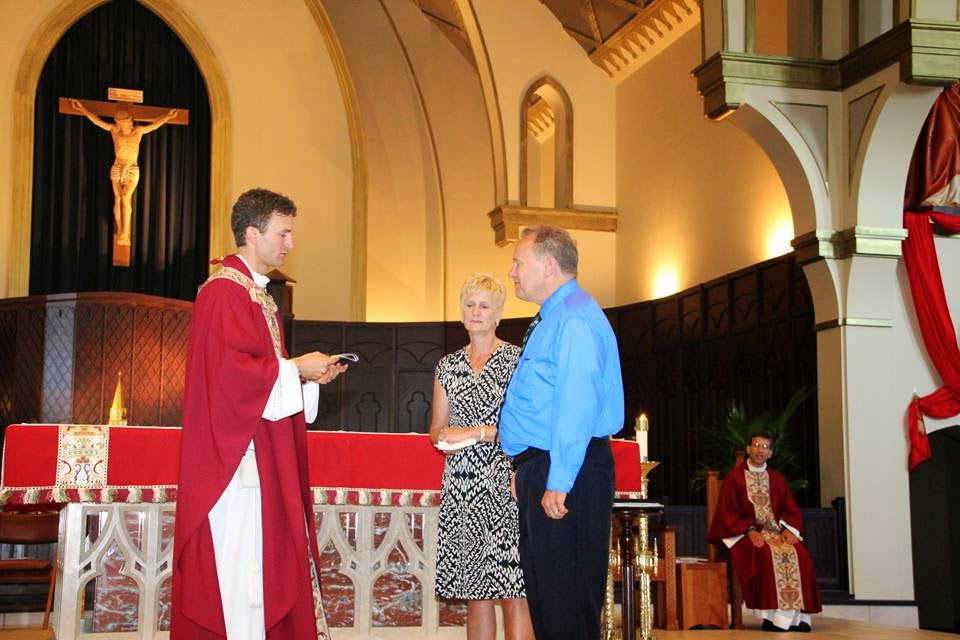 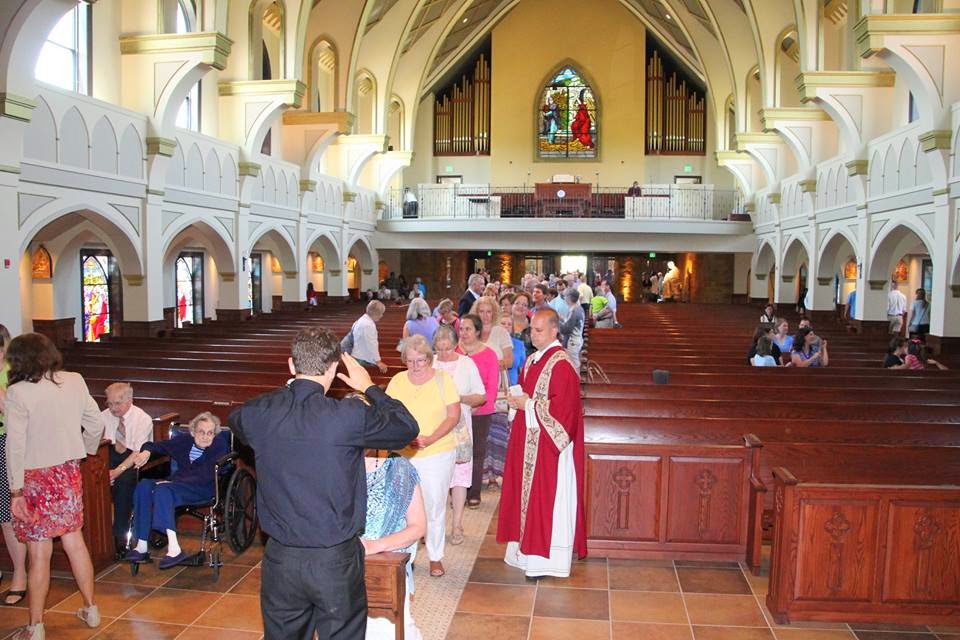 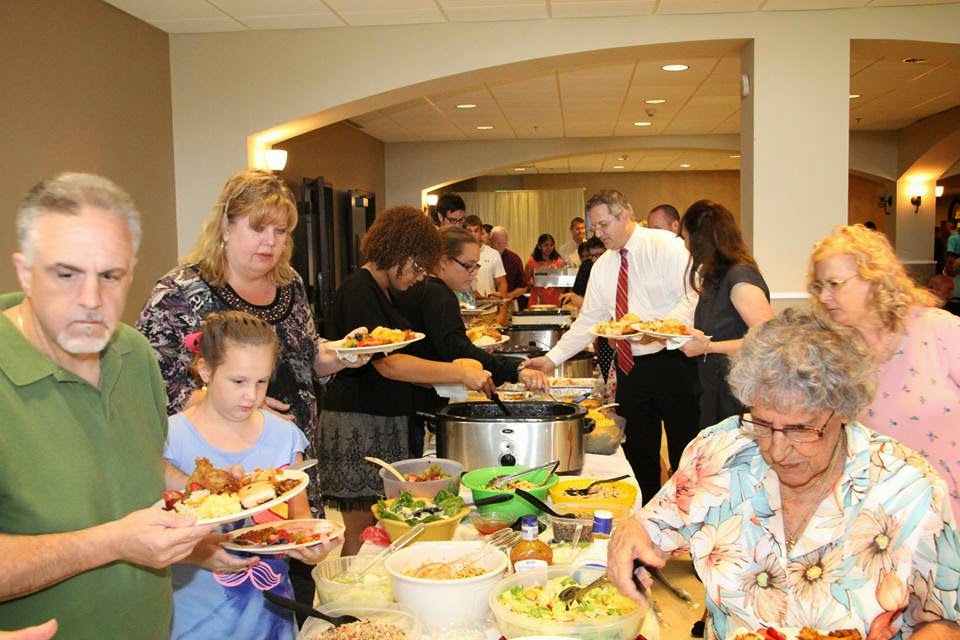 Father Justin will spend the Summer assigned to a nearby parish, then return to Rome to complete his theology degree.  And then it will be up to the bishop as to his assignment.  Any parish will be lucky to get him - he is a remarkable young man.
Posted by ProudHillbilly at 10:16 AM 7 comments:

Watch goofball Perry. I keep thinking this is going to end badly but he never falls off.

Posted by ProudHillbilly at 11:14 AM 2 comments: