So. Just a Thought.

If you asked someone to give a detailed history of the geology of wherever you are, most people would have the honesty to say "I don't know" because most people don't study the details of geology.

But the same people, with the same level of knowledge of guns as they have of geology, will lecture you all day long about guns.
Posted by ProudHillbilly at 11:36 AM 6 comments:

One radiation treatment left.  Hair is coming back. 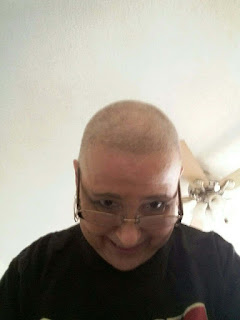 But she's been destroyed financially by Obamacare.  Because people are too stupid to understand that there is a huge difference between health insurance and health care.

Yeah, I know it's not Christian, but I pretty much don't want to talk to liberals these days.  Because I'm trying to figure out how to deal with the destruction their votes have wrought in my family.
Posted by ProudHillbilly at 7:15 PM 4 comments:

In Case You Wondered

Yes.  I am the Crazy Cat Lady.  Except for the part where I know I can't afford to properly care for above x number of cats.  So I've been fostering kittens.  Two litters and now a pre-packaged litter. 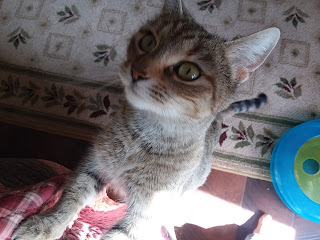 She's a darling surrender who is due in about a week.  No, I won't keep her after the kittens are gone.  She won't have much trouble finding a home. And I can only afford so many on my own.  It hurts to let each one go.  But the other option is misery or death for them.  Fosters give them a chance.  So I'll take the emotional hit and try to turn the most loving cats/kittens possible back over to Animal Welfare for adoption.
Posted by ProudHillbilly at 3:49 PM 2 comments:

...what killed 6 million Jews during the Holocaust, people will say "the Nazis."  Or they will say "Hitler."

They never say "the guns", "the zyklon-b gas", or "the cattle cars" killed the Jews.  The tools never get blamed.  And rightly so.

So why is it when evil crops up now it's
the tools that get blamed?
Posted by ProudHillbilly at 7:45 AM 1 comment:

Do you remember that whole + 1 BILLION $ fine you got hit with when you tried to brush off the whole unexpected acceleration thing?  You know, the defect that killed more than 80 people and that you knew about but tried to hide or explain away as various types of driver error?

Well, I can tell you that just being a passenger in a 2009 Toyota that does that FOUR FRIGGIN TIMES is SCARY!  The only thing that kept it out of the realm of utter terror was a son-in-law who realized what was going on, stood on the brakes, and knocked it into neutral each time.  Otherwise we would have rear ended someone.

And then your dealer knows enough about it to hand out a pre-printed form about the defect but shrugges their shoulders about the fix.  You've had YEARS and you still don't have a fix?! You are still telling people to live with it until disaster strikes?!

My family is not within your "acceptable risk" tolerance. Especially my 5 year old granddaughter.

The floor mat is 3 to 4 inches from the gas pedal.  It happened while we were stopped.  The accelerator did not stick open. It took off from a stop.  There was no user error.  We were lucky the user knew what to do and got us home.

The defect showed up in 2009 to 2012 models.  Somewhere there are computer lists of the VIN of every vehicle involved.  And somewhere there is a computer list of every part and its manufacturer for every one of those vehicles.  And lists for the same models from 2013 on.  It's basic forensics.  What part changed? That change is your fix, idiots.

And why are you still willing to get taken to court over it? Because you don't get to wave vaguely and tell us to just take the vehicle home until someone is injured or dies.

And why the @#$!!@$ did my son in law have to raise hell and start walking home just to get enough attention to get a shuttle, leaving a vehicle too dangerous to drive in the hands of vaguely hand waving Toyota service employees? This is on Toyota - there should have been a loaner until Toyota deals with this.

I'm just one person.  But damned if I'd buy a Toyota now.
Posted by ProudHillbilly at 6:05 PM 7 comments:

...that on Thursday there was much wailing and gnashing of teeth: release of The Memo would compromise national security, yadda yadda yadda.  But as soon as it dropped today the same people were saying it is a big nothing-burger.

They need to pick one. It's either major or It's not.  It isn't A Great Catastrophe AND A Great Nothing at the same time.  It kinda makes a lot of people look like they don't even listen to themselves.
Posted by ProudHillbilly at 10:01 PM 1 comment: