Has gone entirely too far. 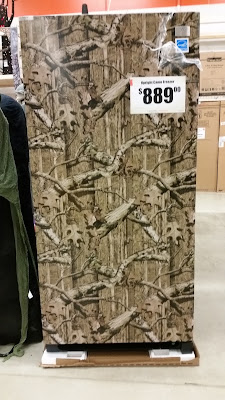 Posted by ProudHillbilly at 6:05 PM 4 comments:

Seen at the Michigan Renaisance Faire: 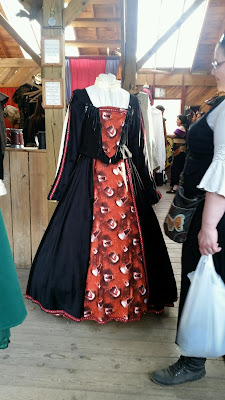 *h/t to my daughter for the title
Posted by ProudHillbilly at 5:39 PM 3 comments:

...where exactly am I supposed to sleep?  And the answer better not be "On the couch." 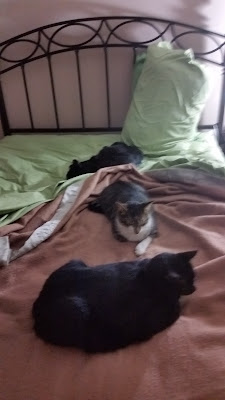 Posted by ProudHillbilly at 7:52 PM 8 comments:

Well, I'm Dumber Than That

One of my ideas for our family reunion is to get us out on the web so that we can share memories, photos, and information and to provide something for folks doing genealogy to ping off of.    Maybe even inspire cousins, kissin' or otherwise, to join us.  Although there are free sites that even provide some tools to build a standard web site, it seemed the quickest way for a non-web person like me would be through Facebook.  So I got myself one of these. 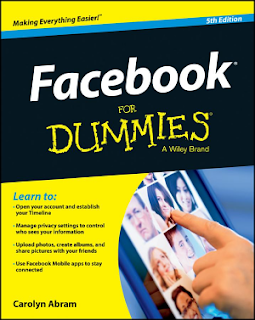 Turns out that I'm even dumber than the folks this book was written for.  Sigh.  So I've been sort of just stumbling around.  First discovery - Facebook doesn't allow for the posting of documents.  Oh, great.  You can get around it by posting IMAGES of documents, but one of the things I wanted to provide was resources that were searchable.  Double sigh.   Oh, well, plodding on.

And of course I wanted to give out the URL at the Reunion but the site isn't yet eligible for a "vanity", or shortened, address.  So I had to print out this:  https://www.facebook.com/Whetsell-Felton-Reunion-The-Face-of-the-Past-the-Present-and-the-Future-1627633847507692/timeline/ .

But at least a few cousins have found me.
Posted by ProudHillbilly at 12:07 PM 5 comments:

It Was a Beautiful Day in the Neighborhood

It's been crazy for a while.  I'm not referring to the world, although that's a valid statement for that.  But here at the Caer.  Frantic final preparations for the Whetsell-Felton Reunion (our 94th), arrival of company, travel over to Preston County, WV, for aforementioned reunion, then on to Michigan for the week after.  Then reverse direction back to the Caer, put company on train back to NC, and me with a two-page "to do" list for the following week.  Some of which is stalled because stupid, cheaply made replacement parts.  Razzafratz.

We did Summer for a little bit in August.  The type of Summer where the humidity goes up a wee bit.  Up enough that I kept the house closed up for at least 3 days straight.   Usually, I open up at night because I hate sleeping with the windows closed, but it was like a steam bath and I could tell there wasn't going to be much in the way of sleeping if I didn't use the AC.  Yeah, I know I grew up without AC.  I grew up without a pillow-top mattress, too, but I've grown real fond of mine.  Sue me.

Friday a week before company arrived was spent in yard work.  That Saturday dawned as something like The Perfect Summer Day.  Mid-80s and dry.  And I hadn't been hiking for a couple weeks.  Because heat stroke.  So I ran out the door and headed for the Michaux State Forest area of Pennsylvania to do the Sunset Rocks - Tom's Run loop.  Not real long - 5 miles.  But I wanted to mess around Camp Michaux, too, which added a bit.

And yes, yes it was a lovely day for a hike.  First discovery - the AT has been re-routed since the map I was using was made.  Which brought me out maybe a half mile up from the Camp Michaux site. 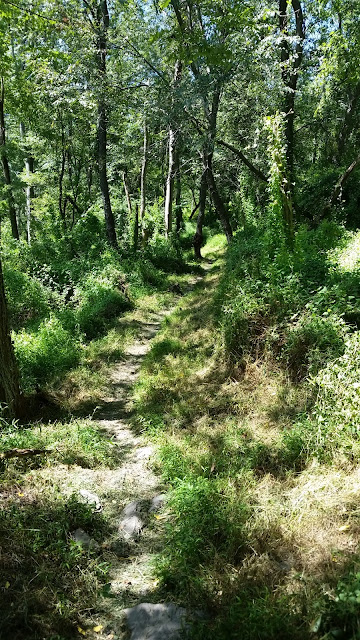 Camp Michaux was originally a Civilian Conservation Corps camp, then an interrogation camp for POWs during WWII, then a church camp.  I passed through there while hiking about 30 years ago when it had only been abandoned about a decade.  At that time, it was rather eerie - building pads, open streets under which you could hear water running through the camp drainage system.  It has grown up considerably since, but a numbered self-tour is available. 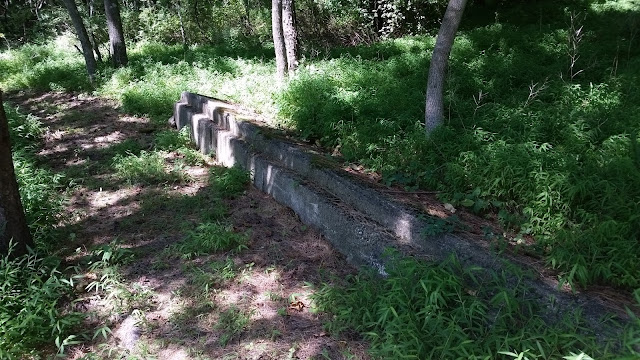 Having walked down the road to the site, of course I had to hike back up to the AT. But at least that part of the loop is flat and pretty and just rolls along through the woods. 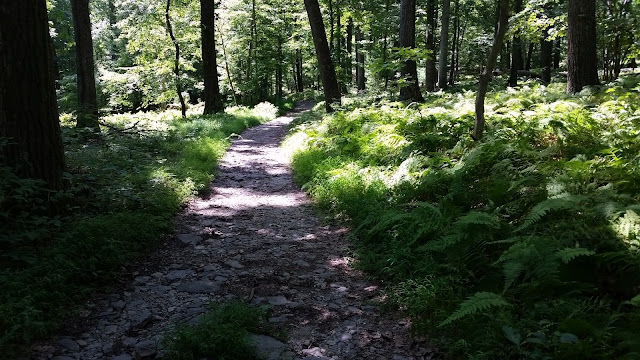 And along the way you get to a sign that marks the mid-point of the Appalachian Trail.  With a mailbox containing a trail log book.  A bit of a surprise out in the middle of nowhere. 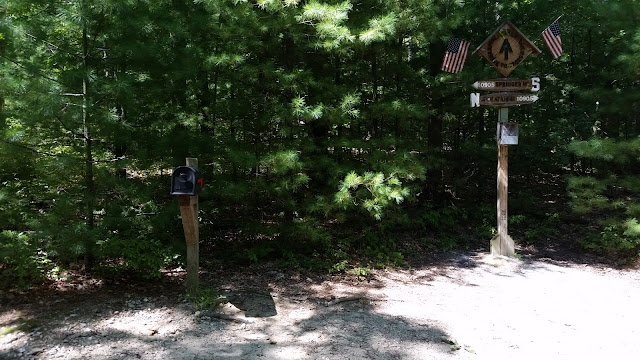 Shortly after the Tom's Run shelter area the turn to head up to Sunset Rocks appears. And at some point I began to realize that I should have put that last climb at the front of the hike.   Because STEEP!  Note the blazes on the trees, which gives a bit of an idea of the slope. 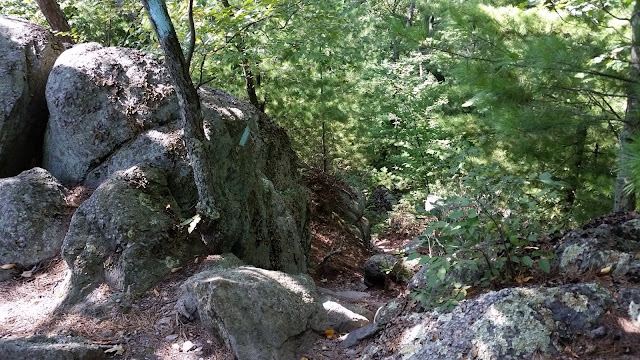 And it is a rock scramble across the ridge, which, having realized that a) I was on the trail alone and b) my knees were not completely reliable by that time, I took very slowly.  Particularly slowly at one spot where I had to contemplate the options for a couple minutes before I figured out how to get down.  Fortunately the rocks are a very course sandstone and provided a good gripping surface. 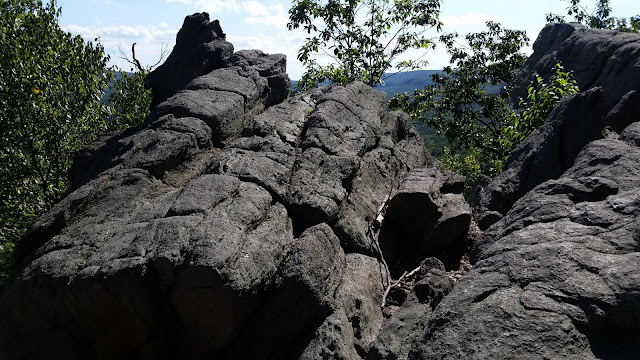 And there's pretty on top. 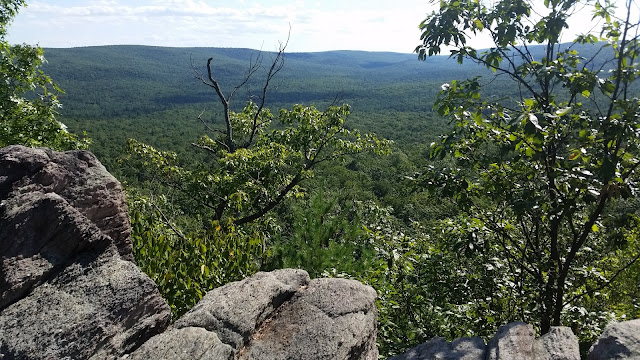 Then a very steep drop back down to the parking area and a great deal of relief in getting the hiking boots off.

I came back with a souvenir, picked up off the AT, which follows an old wagon road and passes Pine Grove Furnace State Park, the site of a historic industrial area built in the 1760s.  By the time I got off the trail it was too late to take it to the office, but it goes back with me in October when the local artifact historian can take a look at it during Fall Furnace Fest. 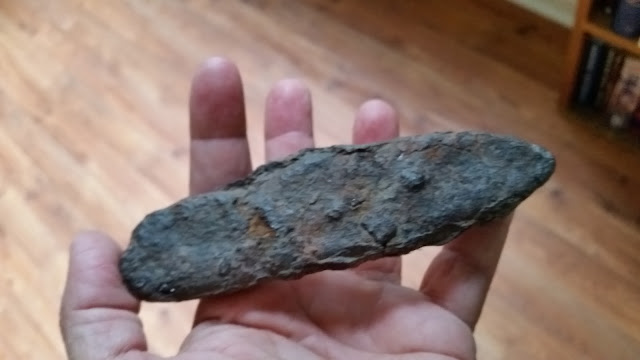 And I had a chuckle on the way home.  Heading south through MD I passed a 160 acre solar farm.  160 acres cleared of vegetation to create a non-permeable surface in a state that until recently was mocked for its "rain tax" that imposed a fee on impermeable surfaces.   Maybe if they put in enough of those the runoff will bring the rivers back up so I can get some more kayaking in before the season is over.
Posted by ProudHillbilly at 11:53 AM 5 comments:

I Now May Have To Buy An AR