I've been carrying a Glock 19.  I'm not the best shot with it but since I've retired I've been trying to get to the range to practice a lot more.  And reloading makes ammo for that practice a whole lot cheaper.  There's nothing wrong with the Glock and I like their reputation for taking a beating and for being able to shoot mud if that's what you loaded it with.  The problem has been that my hands and it don't fit exactly right.  I can't work the magazine or slide release buttons without rotating the gun in my hand.  No quick mag changes for me.

So I've been thinking about another carry gun.  Actually, I think about a lot of guns, but carry is first priority.  I've looked and handled when I've been in a few shops, but nothing felt right until I came across a Kahr CW9 last week while I was wandering around Virginia: 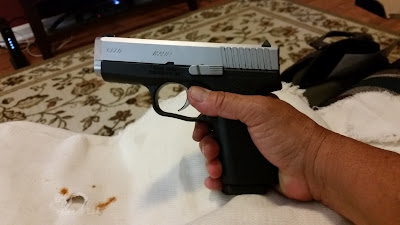 And it felt just right.

So I bought it.  And suffered a major disappointment right then.  Different state.  I couldn't take my new toy home right then.  It had to be shipped into this state.  Fah.

I was finally able to pick it up today, and I went right to the range with it.  Note that I've never bought a new gun before.  I've always bought used.  So I did not know that they ship dry.  Sigh. Jams, failure to feed.  I did manage to test the feel of the gun, even with manually ejecting each round.  I love it.  And I don't have to rotate the gun to hit the release buttons. 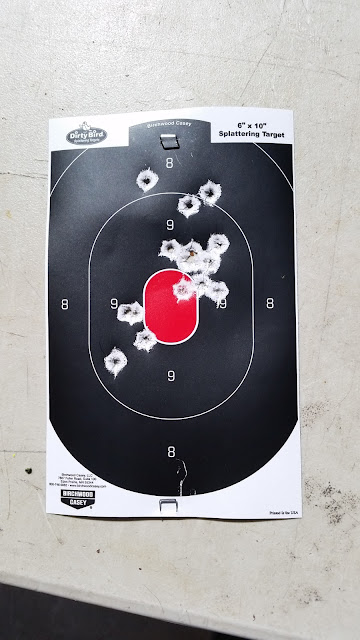 The three furthest out on the top and the lowest left one were after my hands were getting tired of working a very stiff slide with sweat pouring off me.

So I switched to the Glock.  It's going to become my beside-the-bed gun.  The difference between triggers was funny.  The Kahr has a longer pull.  The Glock went bang before I expected it to.  Still not the best shot with it, although I was getting better by the time I ran out of ammo.  At least I settled into a consistency that tore a hole in the target towards the end.  The hole just isn't quite where I want it.  And I did feel better that I improved and pulled more toward the center as time went on.

Thoroughly dehydrated and out of ammo, it was time to go home and clean guns.  The new gun being a bit of a mystery to me even though they gave me a demo at the shop when I bought it.  So I watched a video and set to it.  It was a bit of a challenge at first, but I finally got it stripped, cleaned, and oiled and started the reassembly.  Easy peasy.  Except for the recoil spring.   You probably know this, but the Glock recoil spring and rod looks like this: 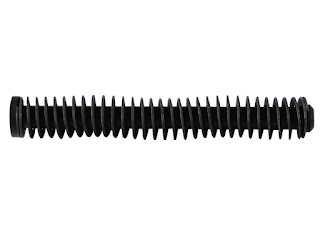 A Kahr spring extends half again beyond the end of the rod.  And that spring just didn't want to go no how no way.  Fight fight fight cuss cuss cuss.  Grumbling text sent to Murphy's Law with this picture: 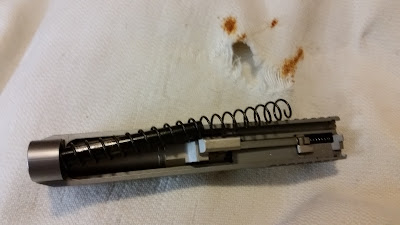 His reply:  "You're putting it in backwards."  Sigh.  He didn't guffaw but he did snicker.  And yes, yes, it does go in much easier when you do it in correctly.  And then reassembles really quick.

So I'm very happy.  Except I want to go right back out and shoot it again.  With, you know, oiled parts this time.  I tried to end the cleaning session with the troublesome Glock magazines but my hands were tired and sore and as easy as the videos make it look I was having no success in getting the base plates off.  Then I did some reading and apparently you often need a third hand to do it.  So I'm done right now, watching "Adam 12", and anxiously waiting for the range to open again.
Posted by ProudHillbilly at 7:27 PM