The Religion of Peace has a webzine, "Inspire". And its second issue contained an article titled "The Ultimate Mowing Machine.” Guess what it was about?  Well, if you said it was instructions for how to use a truck as a weapon to maximum effect, you'd be right.

Muslims have killed nearly 12,000 men, women, and children this year alone.  And it's just July.   Yet we are bringing 700 un-vetted muslims into this country every week.

When are people going to get that every one of these attacks come from FAITHFUL muslims? Muslims who are TRULY following the demands of their prophet?

We're just a few steps behind Europe.  Yet we spend more time worrying about Pokemon Go. 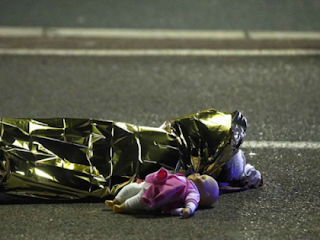 This is YOUR child, folks.   Coming soon to YOUR town.

Posted by ProudHillbilly at 8:20 AM

Email ThisBlogThis!Share to TwitterShare to FacebookShare to Pinterest
Labels: islam is NOT the religion of peace!