From the "How did that seem like a good idea?" file, William Everett Alemar was spotted running near a Martinsburg, WV, school at 7:30 am wearing/carrying this: 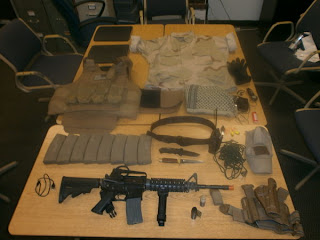 Needless to say, police were called. The guns are trainers, although folks can be excused for not noticing that immediately as the guy ran by.  He's been charged with various offenses. Turns out he was drunk out of his gourd. Unfortunately, we still don't have penalties for stupid.  Full story here.

And then from the "You think we aren't too interconnected for safety?" file, there's the story of the train derailment in Ellicott City, outside Baltimore the other night. Tragically, two young women were killed when the cars dumped tons of coal on them as it derailed. 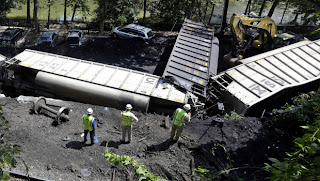 Here's the thing - that derailment on the east side of Maryland shut down our local DMV here in West Virginia.  A Verizon cable was affected, which in turn shut down those dependent on it.  Moral of the story is that we have become networked in ways we don't even think about and we need to really, really understand that we need to be able to cope in a scenario in which that network is down.
Posted by ProudHillbilly at 5:55 AM

Email ThisBlogThis!Share to TwitterShare to FacebookShare to Pinterest
Labels: Ellicott City train derailment, stupid drunks, What would you do if we were hit with an EMP?