Guffaw had himself a Bobby Burns day recently – Friday was mine.  I didn’t have huge plans, and up to a point the day went pretty well.  Friday is normally my day to go to the office and, as usual, I drove.   I have a sleep disorder so I get up when my body says to get up, not when the train system going out of Brunswick, MD, says to.  And unless something Very Bad has happened on the highway, I make the 75 mile drive in time to clock in at 9:30.  That rotates my day around so that I then leave after the worst of the traffic is done.

It was a nice day.  There was some frustration because the system had gremlins and I got stalled on several projects because I couldn’t get to the data I needed, but ah well.  I dashed down to the Basilica of the Immaculate Conception for confession on my lunch break – it’s just a couple stops down the subway line from the office.  It was a beautiful day, and apparently also commencement day at Catholic University. 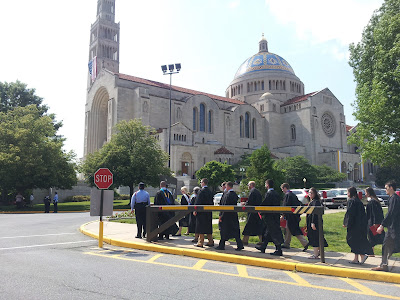 So a bit after 6 pm I packed up and headed for the parking garage.  My plans for the evening:  go home, have a sandwich, read, relax, go to bed.  The “gang agley” factor raised its head when about halfway to the garage I realized that I couldn’t find my car keys.  Back to the office to rummage and dig.  No keys.  Pockets, lunch bag, computer bag emptied out.  No keys. They aren’t in the ignition, either.

I’m 75 miles from home.  And public transportation is virtually non-existent between where I live and about 10 miles west of where I’m standing.  Crud.  Crud crud crud.

Fortunately, I have a neighbor who has a key to my house, and much as I hated to do it I called her and asked if she could get my spare keys and meet me at the end of the subway line in Gaithersburg.

The D.C. metro system is not a complete loop.  I was in Silver Spring, I needed to go to Shady Grove.  In the crow flying world they aren't far apart.  In the Metro world it means you go all the way down into D.C. and then up the other side.  So 50 minutes later, having passed through many subway stops that are much more interesting on a weekend, I was in Shady Grove.  My neighbor delivered the keys, we went out to dinner, then I started the trip back to Silver Spring at about 10 pm.  Retrieved the SUV about 11, then did the 1 ½ hour drive home, knowing that I had to be on the other side of the county at 9 am the next morning.  At least traffic was really light by then. 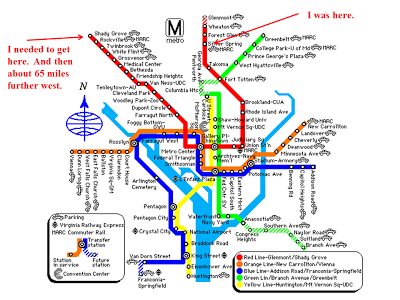 On this week's to-do list - get a spare key to leave at the office.
Posted by ProudHillbilly at 8:07 AM