I don't have regular TV.  I just have internet.  Which hasn't protected me from the never ending political ads.  Before every YouTube video.  At random moments during Roku movies.  And then there's my physical mailbox.  Whole forests turned into slicky paper ads.  And they go right into the trash.

Here in WV we have a battle between multi-millionair professional polititician  Joe Manchin and our state's attorney Pat Morrisey.

I've noticed two things because I can't escape them: Manchin's main arguements are 1) Morresy isn't a native West Virginian so he is BAD and 2) he was a lobbyist for drug companies and we have a major opiod epidemic so that makes Morrisey BAD.

So...1) I live in the eastern panhandle of WV.  I'd be very happy if everybody who moved here because of our lower taxes etc etc but wants to bring their stupid liberal voting here got the hell out. Stop shitting in our nest.  I'm originally from Preston County, WV.  My family has been in WV for nearly 200 years. We weren't gimmedats.  We built our lives out of the wilderness.  We are still farming the same land.  I was there in August.  I can't wait until this crap I'm going through is over and I can go back for another visit.  I'm already thinking about what I can take to our next reunion.  If you don't like our freedom and our country ways then you can get the hell out of our state.  But if you come here to build a life in that freedom then you are welcome and you can lay down right next to me in our family graveyard when the time comes. #&@!$%× anyone who thinks someone shouldn't be able to come here and build a life.

This is MY tie to the drug companies. 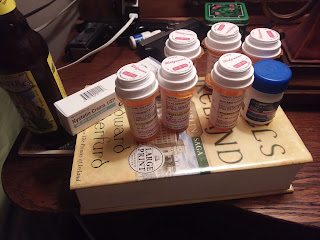 That's only a piece.  It doesn't include the drug that boosts my white cell count so that I have a chance to fight infections.  It doesn't include the 4 drugs plus antihistamines and steroids that get pumped into me for 5 to 6 hours every 3 weeks so that I can LIVE.  Because not that long ago in history I would just be preparing to die.  The cancer had spread. The drugs make me feel like hell but it's better than the alternative.

And the anti-drug adverts don't mention Joe Manchin's daughter.  She's a CEO of a drug company.  But that's OK if you are a dem.

When YOU go through a major health crisis THEN you get to say that drug companies are bad and shouldn't be in WV.  Until then you are just one more intellectually dishonest liberal.  And I am SO done with that.
Posted by ProudHillbilly at 8:16 PM