The New York state legislature has passed a bill making abortion legal up to birth, removed protections for babies who survive an abortion, and removed the requirement that a physician perform the abortion.

One of the ironies lies with what that bill says to the black community of New York. Under slavery, a black child had worth. It was largely the monetary worth of livestock, but at least a negro child had the protection that monetary worth provided. Under the Democrat legislature of New York, that monetary worth has been moved into the hands of abortion mills like Planned Parenthood.  Since 1967, an estimated 20,350,000 black children have been aborted.  That's 20,350,000 black American citizens who have never been allowed to chose to love, to work, to create, to have children, to vote:  in short, they never had any choices at all.  New York has now enshrined in state law what we already knew Planned Parenthood and its compadres believe:  even when they can control their vote, blacks are worth more to Democrats dead than alive. 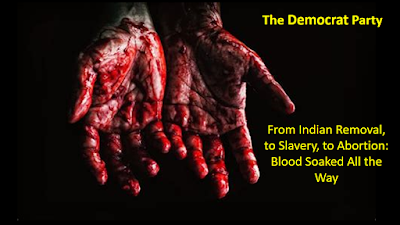 Posted by ProudHillbilly at 4:31 PM

Email ThisBlogThis!Share to TwitterShare to FacebookShare to Pinterest
Labels: 20350000 dead black American citizens, democrats have been the party of death and suffering from the beginning, New York obscenity