Old NFO, Murphy's Law, and Broken Andy have done a great job of describing Gun Show Sunday.  All those tables of shooty goodness, but I really needed to not buy another gun right now.  So I looked and drooled, but held myself to reloading stuff, as well as oddbits like a rifle case and a better range bag. 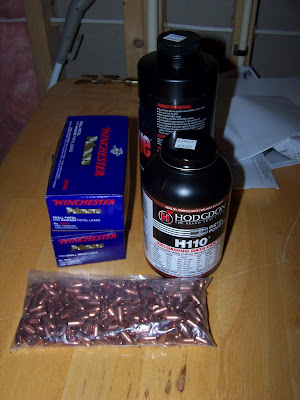 I was home by 3ish, and it was hotter'n hades, so I thought it would be a good afternoon to put the pieces of the reloading kit together and get to work on some of the brass I've dragged home.  The basic kit comes with all sorts of pieces, some of which don't seem to appear in the not-very-detailed instructions. 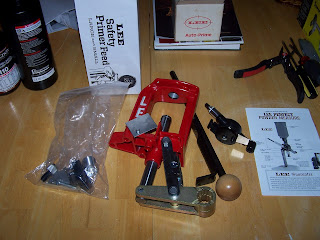 But what the kit doesn't come with with would be the three bolts needed to fasten it to the bench. And in all the screws and bolts I've accumulated in the garage, not a single one was of the needed size.  Well, fudge.  It's Sunday.  It's hot.  I don't feel like running to the Home Depot.  Book, deck, and beer appeals much more.

Today was range day.  I am not allowed to carry credit hours at work beyond a pay period but I can pick up enough to give me time for a good range session followed by lunch each week.  Murphy's Law insisted on driving for some reason, and we got there by 10ish.  Of course I forgot my camera - I would have liked a pic of the Enfield in action.  It's a handsome rifle with lovely dark wood.  All else was good - I seemed to have the pistols nailed today, have finally started to get the hang of the speed loaders, and shooting steel is definitely more fun than shooting paper.  Confirmed that the M-1 is shooting high and I need to aim slightly below the target - since aiming at the lower edge of the target means I can actually SEE the target I'm OK with that.

Burgers and beer at the Tap House afterwards.  Then back to work - the only down side to the day.

Oh, and I ran out this evening and got the bolts.  Hopefully I'll get everything set up tomorrow. 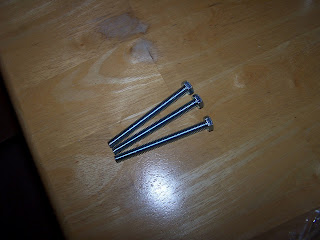 Posted by ProudHillbilly at 6:12 PM