Since the evil George Bush's tax cuts for the rich are set to expire, The Heritage Foundation has kindly listed the details of exactly what will expire (and transpire). I've bolded and italiced the specific Bush tax cuts so everybody can see how they are for the rich and just left the others in standard font - there are a lot of other tax cuts and credits due to disappear at the same time.

Increase in joint returns beginning and ending income level for phase-out by $5,000 indexed after 2008.

Dependent care tax credit - increased the credit rate to 35 percent, increased the eligible expenses to $3,000 for one child and $6,000 for two or more children and increased the start of the phase-out to $15,000 of adjusted gross income (AGI).

Alternative Minimum Tax (AMT) - patch raised income threshold over which taxpayers are subject to AMT so it did not impact middle-income taxpayers.

Expanded Child Tax Credit -  reduced the earnings threshold for the refundable portion of the child tax credit to $3,000.

Expanded EITC - inncreased the credit’s percentage and increase in joint returns beginning and ending income level for phase-out by $5,000 indexed after 2008.

Credit for refined coal facilities, which gave a $6.27/ton income tax credit for the production of refined coal.

Suspension of limitation on percentage depletion for oil and gas marginal wells - allows owners of wells to deduct more than 100 percent of their net income from a marginal well for depletion.

Grants for specified energy property in lieu of tax credits - taxpayers could elect to receive a grant instead of a credit for property put in place to produce renewable electricity.

Provisions related to alcohol used as fuel - income and excise tax credits for the production and purchase of ethanol.

Credit for improving the energy efficiency of a home 30 percent credit for the purchase of energy-efficiency improvements to a home’s envelope, including insulation, exterior windows, and roofing materials.

$250 deduction for teacher classroom expenses, which allowed educators can deduct up to $250 for books, supplies, computer equipment and other materials used in the classroom.

Contribution of capital gain real property made for conservation purposes - removed the limitation on deductions for income, estate, and gift taxes for charitable contributions of appreciated property for the purpose of conservation.

Tax-free distributions from IRAs to charities - withdrawals from traditional IRAs are usually taxable because the taxpayer did not pay tax on the income before contributing it to the IRA. This provision allowed taxpayers to deduct charitable donations made with funds from their IRAs the same had they made the donation before putting their income in an IRA.

Refunds disregarded in the administration of federal programs and federally assisted programs - refundable tax credits were not considered in a person’s income when applying for welfare programs.

Research and experimentation credit - a 20 percent credit for research expenses.

New markets tax credit - a credit for equity investment in a corporation whose mission is providing investment capital for low-income communities.

Employer wage credit for activated military reservists -a credit of 20 percent for employers of the amount above their employees’ military earnings they pay them while they are on active duty.

15-year straight-line cost recovery for qualified leasehold, restaurant, and retail improvements and new restaurants - allows businesses to deduct from income investment in restaurant and retail properties over 15 years rather than the 39 years under standard depreciation rules.

Enhanced charitable deduction for contributions of food inventory - extends to all businesses that donate food from inventory to charitable organizations a deduction greater than the business’s cost for the items donated.

Enhanced charitable deduction for corporate contributions of computer inventory for educational purposes - allows businesses that donate computers to charitable organizations a deduction greater than their cost for the computer items donated.

Modify tax treatment of certain payments to controlling exempt organizations - pertains to the tax treatment of non-taxable businesses. Income unrelated to an exempt organization’s mission is generally taxable. Interest, rents, royalties, and annuities are usually excluded, however, unless they are paid by a
controlled subsidiary (taxable or non-taxable). This provision alters that to make such payments taxable only to the extent the payment exceeds what the payment would have been had it been between two unrelated businesses.

Extend the treatment of RICs as “qualified investment entities” - provision insures that foreigners holding investments in the U.S. through RICs are exempt from tax on real property interests held in RICs.


So this is what will disappear from U.S. wallets, in MILLIONS:

That means a whopping increase in taxes, shown by average here: 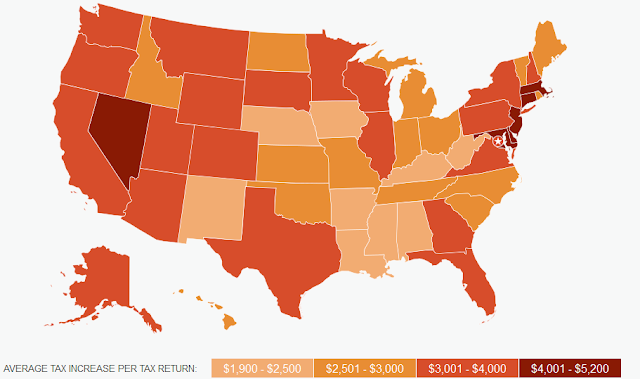 Lots more detail out at Heritage Foundation's web site, including breakdowns within states.
Posted by ProudHillbilly at 8:54 AM

Email ThisBlogThis!Share to TwitterShare to FacebookShare to Pinterest
Labels: additional burden of costs due to Obamacare, Bush tax cuts, credits and cuts due to expire, The Heritage Foundation