1940 was a banner year for the forces of the German Reich.  One by one Nazi forces overran the countries of France, Denmark, Norway, the Netherlands, Belgium and Luxembourg, imposing Hitler's totalitarian state on millions of Europeans.


In Belgium, Gestapo control brought the closure of the International Catholic Cinema Office in Brussels.  The office was a thorn in Hitler's side - it was referred to as "the Vatican's headquarters in the fight against German films."  The Cinema Office files were seized and the premises became the headquarters of the German military police.  The office, once a private chapel, was later used as an SS torture chamber.

With the closing of the Cinema Office, its head, Father Jean Bernard, shifted his efforts to assisting Luxembourg refugees who had fled to France ahead of the advancing German army.  In January of 1941, Father Bernard was arrested by the Germans.  In a largely Catholic part of Europe, priests were viewed by the Nazis, with good reason, as centers of resistance, and any excuse would do for their removal.  Father Bernard was never sure of why he was arrested, but after stops in a couple prisons, he was shipped to the Dachau concentration camp.

Father Bernard survived, and in 1945 he published his memoirs of his time in the camp, first serially in a magazine, then later as a book, Priestblock 25487:  A Memoir of Dachau.  Priestblock was the section to which Catholic priests were sent, 25487 was his identity during his time in that camp of horrors. 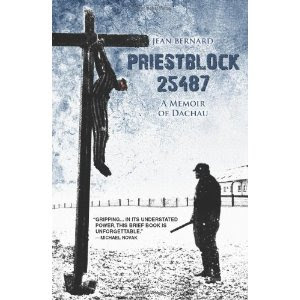 The brutality of the concentration camp and those charged with running it cannot be exaggerated.  In fact, it will always be something that most people can't even imagine.  And those prisoners who were a part of any organization that defied the Nazis were particularly vulnerable to the perverse cruelty of their jailors.  In Priestblock, Holy Days were celebrated by the guards with increased brutality to the inmates:  the Good Friday before Father Bernard's arrival was observed by the random selection of priests for the "hanging punishment."  Hands tied behind them, they were hoisted by their bound hands and left to hang in brutal mockery of the crucifixion that Good Friday commemorates, most of the of the Good Friday victims died or were permanently disabled.

Resistance to the Nazis reverberated into the camps:  those too sick and weak to work were simply left naked in the cold to die after one incident of resistance in occupied territory.

Eventually, Father Bernard was freed, and was able to give us a first hand account of both the horror and the indomitable spirit and faith that existed in Dachau.  Although sometime hampered by illness contracted during his imprisonment, he still served for long years after his release, dying in 1994.

Priestblock 25487 is sometimes a painful read, but I highly recommend it.

Posted by ProudHillbilly at 12:14 PM