Once in a gazillion years my book cases actually get cleared off and everything is dusted and wiped down.  The reno work in the house produced about a ton of dust that got into everything so it was time.  And along the way I found old paperback books that I had forgotten about and wasn't sure why they were still there other than maybe sentimentality.  I know why I have Bradbury and Burroughs - I still actually read them and haven't found a complete compendium of them to take the place of the fragile paperbacks I bought in the 60s.  I was able to replace my Lovecraft with a single hardback volume but not John Connor of Mars or Ray Bradburys because, well Bradbury wrote I-don't-know-how-many books and I probably couldn't afford to replace him with hardbacks now even if they were all gathered together.  And the Mars compendiums only seem to have some of the books, not all of them. I've looked.

Heinlein was one of the  sci-fi gods of my era.  So The Door Into Summer, first published in 1956, was my first pick. 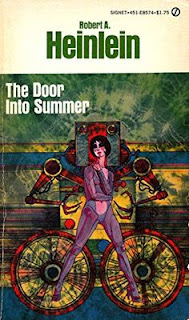 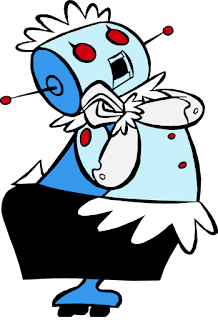 Still OK, although his idea that Los Angeles would become a magnificent place has fallen a tad short in reality.

But partway through the book I started to get uncomfortable.  His partner has a small daughter that the main character, Danny, adores. He's Uncle Danny.  OK so far.  But in the midst of long cryo-sleeps and time travel you realize both that Danny only knows this child from age about 6 to age 11 AND that he's sexually attracted.  At an older age, sure, but he doesn't know her at an older age. And at age 11 she asks him to marry her and he excitedly agrees.  There's Long Sleeps in between, but WTHF!?

There's a happily-ever-after ending.  But for all that Heinlein brought me dreams of rockets and space travel I wouldn't let him around my granddaughter after reading this book.

Posted by ProudHillbilly at 6:02 PM

Email ThisBlogThis!Share to TwitterShare to FacebookShare to Pinterest
Labels: Door Into Summer, Heinlein