You Know How After A While...

...you stop bothering to read things like "People" while waiting at the dentist's office or while in line at the grocery store?  Except maybe if the "National Enquier" headline is "The Sad Last Days Of..." and you think "Oh, is he/she still alive?"  Yeah.  Been like that for years.  I don't watch current TV and I don't listen to current music.  So I have no clue who those people are, or who they've dated/married/divorced, etc.  Don't care, either.

But I just finished this book - a yard sale acquisition: 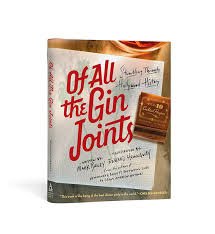 And I knew every actor, every director, every author, every scriptwriter in this book.  And it was bloody good fun.
Perhaps it shouldn't be fun:  it basically chronicles the rather spectacular alcoholic performances of Hollywood greats from the Silent Era (first up - Fatty Arbuckle) through "New Hollywood" (last up - Natalie Wood.) And you really shouldn't laugh sometimes - a lot of these people, like Judy Garland, were fighting demons most of us can't even comprehend.  But then there's the pranks the likes of a completely blitzed Buster Keaton would get involved with and you can't help thinking "Dang.  I wish I could think up something like that!"  And the whole thing with Charlie Chaplin and the belief that iodine would prevent STDs...yeah...As a Chaplin fan I'm still trying to get THAT picture out of my mind.  Richard Harris is quoted as saying "I often sit back and think, I wish I'd done that, and find out later that I already have." And the number of my favorites who periodically woke up with a blinding hangover and no idea where they were is rather a lot.  They also made a lot of fabulous movies while stoned, drunk, and/or hungover.
I'm pretty amazed at the sheer capacity of consumption sometimes, and that some of them managed to live as long as they did while downing quarts of hard liquor and cases of beer every day, with an off day being just a few bottles of wine.  And still act and still write and still direct even while being holy terrors:  Peckinpah was constantly a drugged out, alcoholic nut case, carried a gun on the set, and peed on the screen when daily rushes for Pat Garrett and Billy the Kid turned out to be out of focus.  The Apocalypse Now hotel scene was shot on Martin Sheen's 36 birthday, and he steadily drank himself into a drunken oblivion that is preserved in the movie.  Earlier greats had a variety of comments on the subject: "You can't drown yourself in drink.  I've tried: you float." (John Barrymore 1882-1942); "I'm no alcoholic; I'm a drunkard.  There's a difference.  A drunkard doesn't go to meetings." (Jackie Gleason 1916-1987); "I put liquor in my milk, in my coffee, and in my orange juice.  What do you want me to do, starve to death?' (Francis Farmer 1913-1970); "Tequila makes your head hurt. Not from your hangover. From falling over and hitting your head." (John Wayne 1907-1979).
Sandwiched in between are tales of the legendary hotels, clubs and bars and how a great many familiar and not so familiar drinks came to be.  The Moscow Mule, for instance: too many cases of Smirnoff vodka and a surplus of house made ginger beer and Broderick Crawford as a taste tester.  And then there was Ava Gardner's Mommy's Little Mixture: dump every type of liquor you can find into a jug or pitcher.  I'll pass on trying that one.
Posted by ProudHillbilly at 6:41 PM