Does this sound familiar, given the news of the last couple weeks?

Finally, careful consideration should be given to the danger of this power passing into the hands of those public authorities who care little for the precepts of the moral law. Who will blame a government which in its attempt to resolve the problems affecting an entire country resorts to the same measures as are regarded as lawful by married people in the solution of a particular family difficulty? Who will prevent public authorities from favoring those contraceptive methods which they consider more effective? Should they regard this as necessary, they may even impose their use on everyone. It could well happen, therefore, that when people, either individually or in family or social life, experience the inherent difficulties of the divine law and are determined to avoid them, they may give into the hands of public authorities the power to intervene in the most personal and intimate responsibility of husband and wife.

So wrote Pope Paul VI in his encyclical concerning contraception Humane Vitae in 1968. 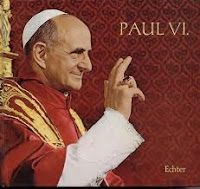 Few people today realize that until 1930 ALL Christian denominations condemned birth control. Indeed, Martin Luther roundly condemned the contraceptive mentality of his own time as an “inhuman attitude, which is worse than barbarous”:

How great, therefore, the wickedness of human nature is!  How many girls there are who prevent conception and kill and expel tender fetuses, although procreation is the work of God!

But the 1930 Lambeth Conference of the Anglican Church declared that contraception was acceptable in SOME cases.  Societal pressure turned some cases into ALL cases soon enough, and one by one churches relinquished the ancient Christian teachings on procreation, until of the major denominations only the Catholic Church was left to declare contraception as a deliberate violation of the design of God.
In 1968, Pope Paul VI released his encyclical Humana Vitae, a thoughtful and prayerful declaration of the teachings of the Church concerning contraception.  Far from just a blunt statement of its sinfulness, the document reflects on such issues as moral law and responsible parenthood.  It also reflects on consequences.  When I first read the document 20 years ago, I was particularly struck by this passage, especially the last sentence:

Let them first consider how easily this course of action could open wide the way for marital infidelity and a general lowering of moral standards. Not much experience is needed to be fully aware of human weakness and to understand that human beings—and especially the young, who are so exposed to temptation—need incentives to keep the moral law, and it is an evil thing to make it easy for them to break that law. Another effect that gives cause for alarm is that a man who grows accustomed to the use of contraceptive methods may forget the reverence due to a woman, and, disregarding her physical and emotional equilibrium, reduce her to being a mere instrument for the satisfaction of his own desires, no longer considering her as his partner whom he should surround with care and affection.

We now live in a society rife with divorce and abuse and desperately unhappy people who have been convinced that sex is a game which will bring them happiness.  We live in a society in which a child is a disease for which prevention has been mandated by the government. How can we read Paul VI's words, and not say that the Church was prophetic?

The full text of Humanae Vitae can be read here.  I highly recommend it; it is not long or particularly difficult.
Posted by ProudHillbilly at 10:48 AM