Because I Wasn't Busy Enough

So after not the best day on Friday it was 10 pm and I was in my p.j.s, glass of wine in hand, watching "Jack Reacher", trying to decide if Tom Cruise was believable as Reacher.  Elderly cat Blu was, as usual, curled next to me.  Suddenly he started flailing and twisting.  Startled, I turned to look and saw his eyes - they were blank and empty as if there was nothing behind them.  He pulled himself up enough to grab the back of the sofa and started trying to drag himself up the back but he seemed to have lost control of his hind quarters - the right leg didn't work and the left was pulled up as if in spasm.  I don't know how long it went on - an eternity or 30 seconds but it scared the hell out of me.  When the physical attack passed he still seemed confused for a couple minutes, and when he went up the stairs I could tell his hindquarters were still weak.

Of course the nearest emergency vet that I know of is 45 minutes away in Winchester, VA.  Phone call to ML to find out their name and a phone call to them. Clothes thrown on, confused cat stuffed in carrier, dash for Winchester.  At night. Did I mention that I'm very night-blind?  And of course there's more traffic lights than I remember the last time I drove that route, all but one red.  Another eternity.

Turns out this is the same place that saved Perry a few years back, just in a new building.  And by the time we got there Blu was fine, all signs of whatever had  happened gone.  The vet noted that Blu is on medication for thyroid problems - she said that one possibility is a "thyroid storm" caused by his thyroid not being regulated correctly yet.  Also something about blood pressure.  He's got an appointment next Saturday for his 6 month blood test, so we'll see.  And I'm pretty sure that my own blood pressure was pretty high while he was flailing around on the sofa.  He's 15, and although I understand on one level that our time together is growing short very quickly now, I'm still not really reconciled to losing him. 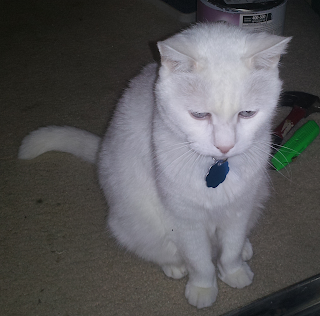 $95 poorer, we came back home and finished watching the movie.  Meh.

Friday caused the weekend to get a later start than planned.  I commented in an earlier blog about physical conditioning.  I'm reminded this morning that tearing up carpet and padding, cutting it into pieces, pulling up tack strips and staples, caulking, and sanding acres of floor is its own conditioning.  It would take less time to list what ISN'T tired and sore this morning than what is.  But at least almost every bit of that nasty, dirt- and mold-filled carpet is out of the house now. 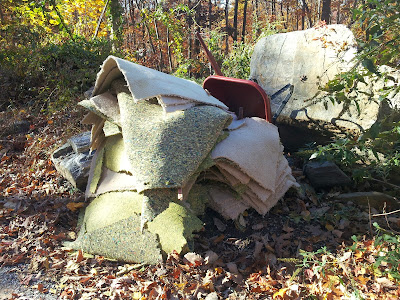 My bedroom is the last room left with carpeting and it's going to have to wait until after Christmas because of the difficulty of working around the furniture and because I'll have to move into one of the spare rooms while I do it.  Also because floor paint has to be left for several days before you can move furniture back on it and the Christmas season will be on us by the time I finish the rest of the house.  And if I'm going to tear that room up I might as well do the ceiling patch I've needed to do while I'm at it.  I've ignored it because I hate hate hate working on the ceiling and I'm going to have to replace a piece of sheet rock over my dresser.  I hate hate hate working on the ceiling.  A lot.

Posted by ProudHillbilly at 5:08 AM