Woo hoo!  Range day!  Tried out the Browning .32  cleaned per an earlier post, and the Harrington & Richardson Model 929 .22, as well as a Smith and Wesson Model 10 .38 revolver and a Ruger 10-22 rifle borrowed from the arsenal known as Murphy’s Lair.
Absolutely loving the Browning – it fits my hand wonderfully and my reaction to the first shot was "Wow!  That feels great!"  I was really happy – I don’t know when this gun was last fired and I had never fired it before so I didn’t know what to expect.  It was still an adventure to reassemble after cleaning but eventually that will work out and I’ll lose my fear of having to hand over a plastic bag full of gun pieces to be reassembled. 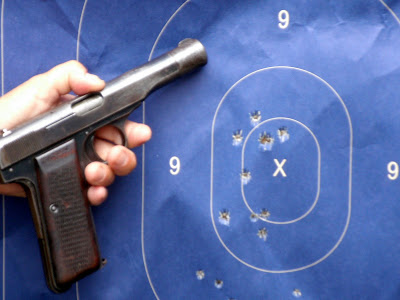 The H&R 929 laid next to an uncle's bed for years, ended up in Dad's bed stand for years after that, and then came to live with me when Dad died.   Like the Browning, t's been languishing in my dresser drawer since 1998 and I have no idea when it was last fired before that. 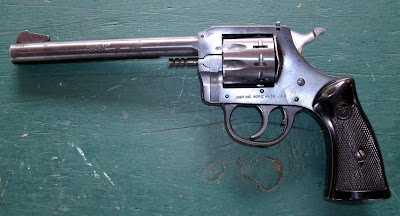 It was also good, but didn’t feel as outstanding in my hand.  Maybe I'm a bit prejudiced against the plastic grips. First rounds showed that I needed to find a different spot on the sight – I was hitting low.  I think that got fairly well worked out after a bit – I need to put a spot of white-out on the correct spot on the forward sight.   My hand also is not accustomed to the trigger, and I’m a lot more on target with single action than when I try to use it double action.  I end up concentrating so much on pulling the trigger that I pull up as I am firing.  This gun went out of commission as of the last time I went to empty the rounds. The pic here does not show the little screw that the cylinder assembly pivots around.  That would be because someone had lost the original and just put a standard screw in its place.  That screw worked out at some point while I was firing and dropped into the gravel, never to be seen again.  At least a replacement can be ordered.
The S&W 10 felt good – better than the H&R.  More substantial, but not too heavy or too large for my hands.  I fired one of the same size both times I was at the range before and they felt too big, but I think my hands are becoming more comfortable with guns in them so the feel is changing.  It's becoming less awkward. And Murphy makes sure the guns in the Lair are well cared for, so it may also reflect a gun that has been carefully cleaned and oiled as compared to one that sat forever without use or care.  It also had an easier trigger, but even with that I was still pulling up.  Single action best right now with the revolvers.  Time time time. Practice practice practice.
And about the third time I did it I realized I was cocking the revolvers for the first shot while they were still pointed down rather than after they were pointed at the target.  No no no.  I stand with my feet spread but as I brought the gun up it occurred to me that that was something that could go very wrong even with accidentally firing between my feet.   Although I guess I would only do that once. It would be one of those things that leaves an impression.
The rifle was fun – light and easy to use.  And I like rifles - I want to play with more.  I need to remember to snug them up  better – I end up carrying more weight than I need to but I tend to figure that out right about as I take the last shot in the magazine.  The one problem – I don’t see the target so good even with glasses after a certain distance.  So with the longer distance I was just hoping I’d hit somewhere in the target. 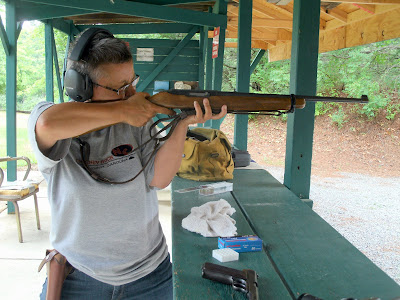 I need to learn to breathe.  I'd realize I had taken several shots and held my breath the whole time.  Need to work on my stance - my posture causes me back problems because I throw my weight wrong when standing and that's carrying over into my shooting stance.  And after about 3 shots my glasses would fog up.  Like, what?  Is my brain overheating from concentrating on aiming?
Finished up by watching a guy finish loading and fire his black powder rifle.  Cool gun, but, jeez, sure wouldn't want to be in a hurry.   And then of course the pleasantly messy job of cleaning.
A very fun day.  Very fun and satisfying.   Thanks, Murph, for the outstanding training.  And I'm still coming to your house come the revolution - you have more toys.  I'll bring the beer.
Posted by ProudHillbilly at 6:15 PM