With all due respect to Campbell's...

I'm not that fond of canned stuff - it just happens to be necessary sometimes.  And given the option of that or nothing, I'll take canned.  But something really would need to be done to make this chicken rather more appealing.  The goop around it reminds me of the goop around cold Vienna sausages.  Or my last head cold. 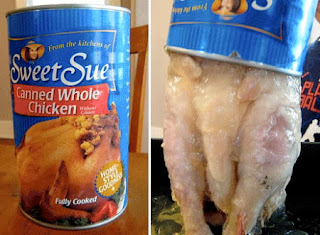 And then there's things that I never, ever would have even thought of.  Like fish mouths.  Who the heck knew you can eat fish mouths?  Yeah - I think there was a horror movie where those bit back. 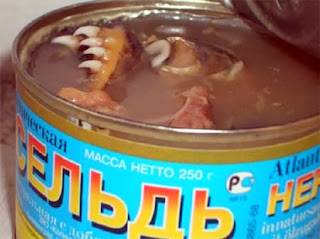 Other cultures don't have easy access to meat, so they include insects in their diet.  I'd be willing to try bugs on the condition that someone, maybe Chef Zimmern, told me they were tasty rather than just nutritious..  After all,  battering and frying an oyster goes a long way towards making up for the fact that it looks like a loogie when fresh.   I'm thinking crunchy would be better than squishy for silk worm larvae, though. 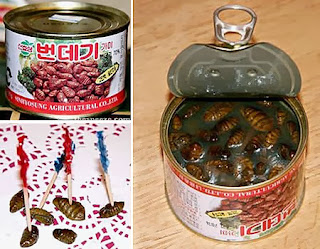 And one of these days I'd like to try brains - I understand that they are quite good when prepared properly.  But I'm not at all sure that canned is a good introduction to any organ meat. 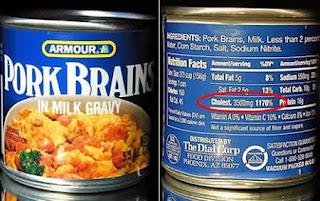 For the more tasty treats, and some explanations, click here.

Now, that said, confession time.  I like haggis. Yes, yes I do.  I may just order some this winter.  And I have an absolute addiction to a dim sum dish that I can only find in one restaurant, and that 60 miles away - phoenix talon.  Which would be chicken feet in a black bean sauce.  I'm so addicted to that. 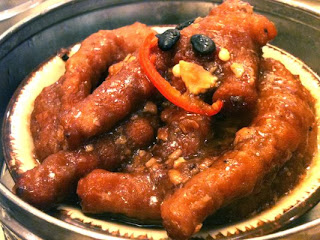 Posted by ProudHillbilly at 3:30 AM