But not in the sense of mad.  Pissed as in tanked, fried, three sheets to the wind, totaled, sh!t-faced.  Catching up on the Texas nonsense and watching the videos of the arrest and booking of should-not-be-D.A. Rosemary Lehmberg (D - Corrupt) for DWI.  Quite outside of the fact that she was pulled because she drove in a bike lane and was going the wrong direction in a lane, the fact that the other officer has to follow her around to keep her from falling down kinda indicates that she's had more than a drink or two.  And I gotta say, that is the most patient cop in the world - I would have spent half the time he did. 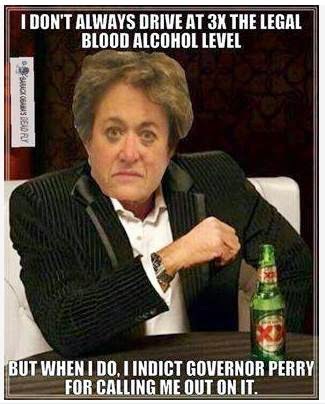 When a bottom-feeder like David Axelrod says this indictment is "sketchy", you know it's bad.
Posted by ProudHillbilly at 12:00 PM