So over time we've been treated to things like this:

Didn't hear much about it from liberals, although if you bring up Byrd's past, they tell you he left his racist past behind.  OK, I accept that - people do reform.  Except that his bigotry apparently still wasn't left completely behind in 2001, and he was a liberal darling then.

Occupy Wall Street has presented us with a stereotype of rich greedy Jews...

....that is reminiscent of pre-WWII German anti-Jewish propaganda: 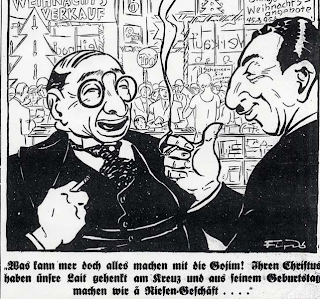 And so far the only liberal discussion of it is how it doesn't exist, despite video after video showing it does.

Then I'm pretty sure I heard comments this past week about Republican women being fascinated by black men:

No, no discussion of that.  I won't even go where that full discussion, once considered an ignorant stereotype of two different groups of people, goes.

And now David Gregory appears to have lamented that there's no Grand Wizard in the Republican party to push Herman Cain out: 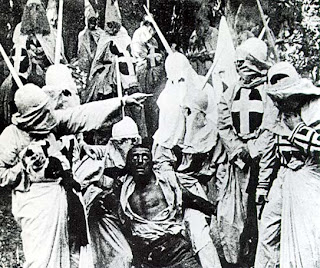 Doesn't seem to be much in the way of horror at stereotyping a whole group of people as akin to Klan members.

Um, could somebody explain to me again how it is that I, as a conservative, am the bigot?
Posted by ProudHillbilly at 4:44 AM