If I haven't made it obvious yet, I am pro-life.  No, let me change that.  I am PRO-LIFE.  I believe that every abortion takes the life of an innocent human being.  There is nothing, no reasoning (or lack thereof) that changes that.  No proof without a reasonable doubt that what is being killed is not human.  No proof that both a woman AND a man were not involved (in vitro included - there is still a biological father).  And no one can say to me that I don't know what it's like to be in a crisis pregnancy - been there, done that.  And helped others being encouraged to abort get through their own pregnancies.

Thing is, I was pro-life when I called myself an atheist.  Scientifically, the idea that no human was killed failed.  Culturally, the idea that we could call that a choice, let that get ingrained into our society, then not develop a more violent society failed.  To allow it and then be surprised when people make choices that are harmful to others is ridiculous.  It fails logically.

Along the way, Bernie Nathanson, may he rest in peace, saw the light, and turned away from the monster he had helped create, using his own film, "The Silent Scream", to demonstrate the humanity of what is slaughtered.  "Roe", of Roe v Wade, became pro-life, as did "Doe" of Doe v Bolton, the case that really opened Pandora's box on the innocent, creating abortion on demand.  More and more women who worked for groups like Planned Parenthood have spoken out and published their memoirs of what they saw there.  More and more women who have had abortions are speaking out.  And more and more death certificates of those who were killed by these "safe and legal" procedures have become available on-line.

So I am a single issue voter.  I will not cast my vote for a pro-abortion candidate.  The famous trilogy is "Life, Liberty, and the Pursuit of Happiness".  If the government does not protect innocent life, then the other two don't matter, for they become impossible to achieve.

So this bit of commentary by George Will, courtesy of Creative Minority Report, heavily influences my thoughts on who to vote for.  I've copied both the Will excerpt and CMR's comments:

I find it hard to believe I am writing these words. But the following is an excerpt from a column extolling the virtues of Rick Santorum written by, are you sitting down? George Will.


They (ordinary Republicans) crave fun. Supporting Mitt Romney still seems to many like a duty, the responsible thing to do. Suddenly, supporting Santorum seems like a lark, partly because a week or so ago he could quit complaining about media neglect and start having fun, which is infectious.

He can, of course, be tenaciously serious. On Sept. 26, 1996, the Senate was debating whether to ban partial-birth abortion, the procedure whereby the baby to be killed is almost delivered, feet first, until only a few inches of its skull remain in the birth canal, and then the skull is punctured, emptied and collapsed. Santorum asked two pro-choice senators opposed to the ban, Russ Feingold (D-Wis.) and Frank Lautenberg (D-N.J.), this: Suppose the baby slips out of the birth canal before it can be killed. Should killing it even then be a permissible choice? Neither senator would say no.

On Oct. 20, 1999, during another such debate, Santorum had a colloquy with pro-choice Sen. Barbara Boxer (D-Calif.):

Santorum: “You agree that, once the child is born, separated from the mother, that that child is protected by the Constitution and cannot be killed. Do you agree with that?”

Santorum is not, however, a one-dimensional social conservative. He was Senate floor manager of the most important domestic legislation since the 1960s, the 1996 welfare reform.

Oh, by the way. Did you see that Boxer quote above? Your life is not protected by the Constitution until they bring you home. M.O.N.S.T.E.R.S.

Yes. They are monsters.  And they've been voted into office by those who accept monstrous beliefs.  We will have no true freedom as long as these beliefs remain. 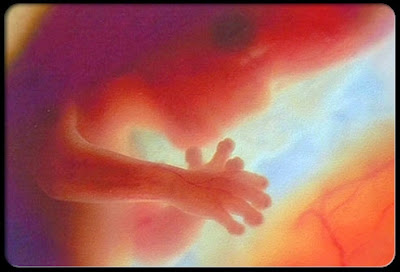 Posted by ProudHillbilly at 7:09 AM