Well, they are definitely full of it.

Lest anyone think that the Occupy folks aren't costing us anything - remember police overtime.  The occupiers have to be protected from the truly homeless who want them to share the food the unions are providing.  Not to mention the future costs of repairing the damage of the areas they've been squatting in.  And apparently in Baltimore they've seen fit to just take over someone's house.  I have a solution for that but it's the socialist state of Maryland so I doubt it would fly.

The latest addition to the American taxpayer's bill for this is quite appropriate.  According to the U.S. New and World Report's "Washington Whispers", we get to pay for their port-a-potties.  I guess we should just be grateful that an alternative to a police car is being provided. 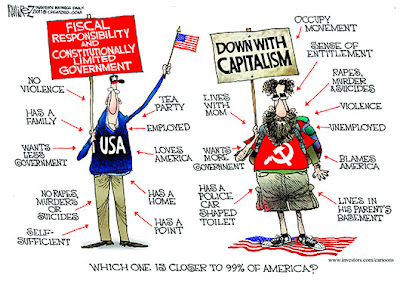 Posted by ProudHillbilly at 5:00 AM