So the memo concerning 'Bam's so called "gutsy call" is available for reading.  According to it, “timing, operational decision making and control”  of the attack on the bin Laden compound were all in one Admiral McRaven's hands.  In other words, if the bin Laden hit had failed, McRaven would have taken the fall.  The guy who can't seem to stop saying "me me me" would have turned around, pointed his finger, and said "him him him."  I suppose we should be relieved that he wasn't planning to blame failure of that mission on Bush.

For contrast, on April 24, 1980, Operation Eagle Claw failed, with casualties, in its mission to free the 52 hostages held captive by Iran.  President Jimmy Carter's statement to America: 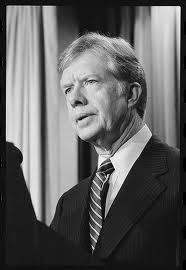 Carter may have been a failure as president, but at least he had the integrity to accept responsibility for a disastrous mission ordered under his watch.

Posted by ProudHillbilly at 11:22 AM