Gotta say, my unexpected 5 days off due to loss of computer was one of the most relaxing vacations I've ever had. The fact that the thought "I have to go to the office tomorrow" didn't make me want to cry rather proved its good effects.

I suspect that one of the reasons was that it came up so fast that I didn't have time to over-plan.  No time to over-obligate myself, or make arrangements to drive 300 miles to visit.  My daughter was in Detroit - no trip to Baltimore. And the heat was ferocious - I wasn't able to kill myself with day-long rounds of yard work.  I would have passed out from heat exhaustion.

So Friday morning was a vet trip for Blu, much to his dismay.  The other two cats are so frightened that it's easy for the vet to work with them.  Blu just gets pissed.  And in 13 years he's never figured out that Dr. Heilman ALWAYS wins.  With the assistance of myself and at least 2 technicians. And sometimes with some spilled human blood - did you know that pine tar is great for those kind of nicks and cuts?  When I got the ornery bugger home he sat in the living room for an hour and just hissed - one ticked off cat. 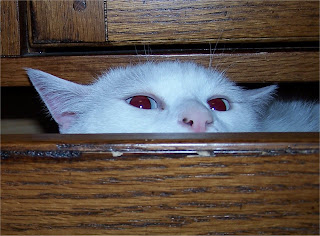 Which left an afternoon for the range. HOT!  Did you ever try to draw your pistol with a hand so sweaty it virtually squished out of your grip?  Yeah, I was hoping no one saw that.  Mediocre shooting, but as I was cleaning the guns that night I sort of got a mental picture of what I might be doing wrong.

Saturday involved picking around the big flea market - I found the bench grinder I've been looking for.  Next time I'll take some more cash and pick up a circular saw.  I don't need new, I just need functioning and right price.

Did I mention it was hot?  Which made Sunday after Mass an excellent day to stretch out on the porch and pretend I was reading while actually dozing.  With an occasional round of yard putter.  I think that was the night the big storm came in and took out the power for the night - opened the windows, hung my little camping lamp over the bedstead and read some more, thoroughly enjoying the cooler air the storm temporarily brought.

Then flower beds at church on Monday morning, a lazy afternoon poking around Goodwill and such, and margaritas on a neighbor's back deck as the lightening bugs came out.

Murphey's Law blogged about our morning shooting here.  It was definitely a great session, although I feel guilty because he is so busy helping me that he doesn't shoot enough himself.  But I do think we got the reason for Friday's mediocre shooting worked out.  And I DEFINITELY think I need to get some pants that aren't made of denim - bad enough they aren't cool in the heat but they bind when you are trying to shoot from other than a standing position.  And the sweat poring into my eyes made me consider lasik even more than I have - bad enough it's in your eyes but it also coats the glasses.

So beer and burgers afterwards, and I cleaned guns and worked on using the speed loader for the .38 as I sat and watched episodes of my current addiction, "Pawn Stars", that evening.

All and all a most excellent vacation.  Hope everybody had the same, and now I have to catch up on everybody's blogs.


Posted by ProudHillbilly at 6:14 AM