Whodda Thunk It Started So Innocently?

Without being able to pit race against race, class against class, liberals have bupkis. They really can't point to any true successes of their policies because their aren't any.  So, as we've seen during and after this election, all they've got is name calling and false accusations.

The media does it in a big way, having an inflated opinion of their importance and an inability to grasp that they are becoming superfluous.  And if the facts don't fit, they just lie. Witness A&E's now cancelled series about the KKK.  Now, it's a running joke that these days that there are very few members of the KKK these days and 99% of them are undercover FBI agents.  But you have to have racial conflict in order to hold on to your position so Hey! KKK in America! Important!  Except the KKK folks involved have revealed how they were paid, how it was scripted right down to requiring them to use the word "nigger" rather than "black": basically that the so-called KKK reality show was not, well, real.  These days if I'm given the choice of believing the KKK or believing the media, I'll believe the KKK.  Sort of like if I was told one thing by Obama and the opposite by Putin I'd be inclined to believe Putin.

So what did we learn from this?  That reality shows aren't real and that the media lies?  Well, DUH!

But that whole thing happened just as I was doing some research before Christmas.  Since being a bitterly clinging Deplorable I have apparently contributed to the return of blacks to chattel slavery and the rise of the KKK, I thought I'd do some detailed reading about the history of the Klan.  I knew bits and pieces and generalities, but if my vote means I'm a card carrying supporter (still looking for that card) I want to know more details.

What I found was pretty interesting.

The Klan was founded in 1866 by six bored ex-Confederates in Pulaski, TN.  It had nothing to do with race, or revenge, or night riding. It was a lark, a club, and the fun was in developing costumes and in making up rituals and titles.  The first names suggested for for the club weren't very catchy: The Merry Six or the Pulaski Social Club were vetoed. The men were educated and familiar with college Greek letter societies.  Kuklos Adelphon was the favorite, so Ku-Klux.  "Klan" was added for some zip.  They decided to conceal their identities, so they came up with costumes that were colorful, "hideous and fantastic" and "most flashy."  In order to prevent recognition of their voices they communicated by whistles.

That was the origin of the KKK:  whistles and costumes, pranks and laughter.  It was play, and new members, initiated with silly gestures and donkey's ears pinned to their heads, flocked in to Den No. 1.

Then Den No. 2 was set up across the line in Alabama.  It most likely was set up in the same way as Den No. 1, but at some point its members became angry over a school that was set up for black children.  And they decided to do something about it.  Along with tormenting the students, they adopted an aim of maintaining white supremacy, and this version of the Klan took off in popularity in the former Confederate states.  The costumes and secrecy were very useful in terrorizing the black population.  It wasn't what the original founders wanted.  In 1868, a founder lamented that "the simple object of the original Ku Kluxes" had become "so perverted.  Better the Ku Klux had never been heard of." 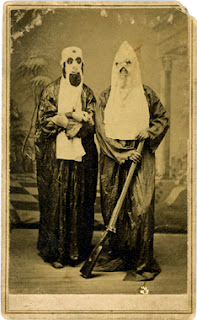 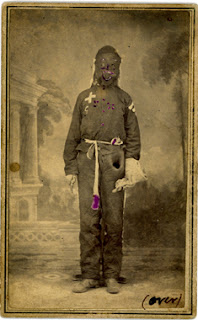 Earliest known photos of KKK members, 1867 and 1871.  The costumes we associate with them were actually adopted from the movie "Birth of a Nation", which was released in 1915.

Posted by ProudHillbilly at 10:26 AM